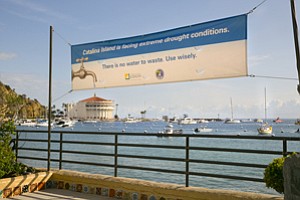 All around the city of Avalon on Catalina Island – on banners above sidewalks, signs along the main tourist drag, restaurant table placards – you’ll find dire warnings to visitors about a critically low supply of water.

Southern California Edison, which runs the island’s water utility, mandated Stage 2 water rationing in August and has kept the restrictions in place since. That means residents and businesses have to cut their consumption by 25 percent. Hotels can’t fill or refill swimming pools and many restaurants have resorted to selling bottled water instead of providing free glasses from the tap.

Those water restrictions are looming large now that the island’s peak tourism season is approaching. Tourism had been on the upswing after bottoming out in 2009, but new developments have helped turn things around.

Now, business owners find themselves trying to bring in more visitors while knowing they must conserve water.

Greg Miller, owner of the upscale Hotel Metropole, said guests have noticed lower water pressure, and he and other hoteliers have had to start sending their laundry to facilities on the mainland. He is particularly worried what might happen if drought conditions persist.

“Tourismwise we’ve been OK and we’re actually having a good year,” Miller said. “The big concern is if we don’t get enough rain to raise the levels of the reservoir, or Edison and the powers that be don’t come up with better options, it’s going to be a major challenge because we don’t want to close.”

Tourists are confronted with warnings about water levels almost everywhere on the island, and while that could make visitors uneasy, the restrictions haven’t proved a deterrent so far, said Randy Herrel, chief executive of Santa Catalina Island Co., the island’s largest commercial landlord.

He said guests, most of whom are Californians, have been understanding of the situation.

“We monitor Trip Advisor and a lot of social media sites and we have not gotten one complaint,” Herrel said. “I partly think it’s because all of California is going through the same thing so everybody is aware and understands conservation.”

Catalina has been under mandatory water conservation orders for nearly two years, though restrictions have ratcheted up as the drought has worsened. If the situation continues, the island could face additional restrictions in coming months.

The island is not connected to the mainland’s water infrastructure. All drinking water on the island comes from the Middle Ranch Reservoir and a desalination plant, according to the Catalina Conservancy, which controls most of the island outside of Avalon.

Mandatory water rationing goes into effect when levels of the reservoir drop below 300 acre-feet. (One acre-foot is about 326,000 gallons, the amount of water needed to cover one acre with a foot of water.)

If water levels drop to 200 acre-feet then Stage 3 rationing would begin, and users would have to cut usage to 50 percent of normal levels. Among other restrictions, all restaurants would be required to use paper plates to save on dish water.

As of February, Edison reported the reservoir’s water level at 277 acre-feet. Signs around the island now report it’s down to 257.

For business owners, and especially hoteliers, the thought of additional restrictions is hard to face. Miller said it’s difficult to come up with a plan to cut water usage in half when guests are being charged several hundred dollars a night for a room. Showers are not restricted but guests are asked to be mindful.

But Herrel said Santa Catalina Island Co. still has seven projects, all of them already approved, that it plans to aggressively develop over the next five years. Plans include redesigning its 150-room Hotel Atwater, updating the Catalina Golf Course and developing new restaurants.

He said those projects will move forward even if Stage 3 restrictions take effect and that he and other leaders on the island are looking for ways to boost the island’s water supply, whether by drilling new wells, recycling water or adding another desalination plant.

“We’re looking at solutions, any solutions, that would be implemented within a year or over a five-year period,” he said. “We believe we can add resources to solve the problem. I feel confident that we will be proactive in finding solutions.”

Miller, who founded Hotel Metropole in 1990, said he doesn’t recall water restrictions as severe as the ones in place today, but also allowed that growth on the island has added a burden to the supply.

“This amount of water 20 years ago wouldn’t have created as much concern,” he said.

“As a small-business man who has a mortgage and employees to pay, I want more business,” he said. “But (the drought), it’s a concern because everybody feels it.”