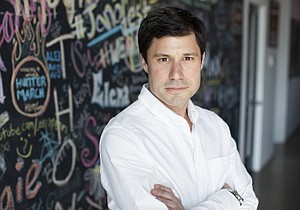 The film studios and media conglomerates that made waves over the past two years buying up online media companies are no longer content to sit back and rely on revenue from YouTube ads and other branded content.

Both AwesomenessTV, owned by DreamWorks Animation SKG Inc., and Fullscreen Inc., a unit of AT&T and Chernin Group’s Otter Media, are looking to generate off-YouTube revenue by producing feature films as they integrate digital media stars into their Hollywood marketing machines.

“We have really high hopes for features becoming an ever-growing part of our business,” said Brett Bouttier, president of AwesomenessTV in West Los Angeles.

To that end, Awesomeness released “Expelled,” a feature starring Vine superstar Cameron Dallas, online in December after a limited theatrical release. Dallas built his 7.5 million-strong audience on the Vine app by making a variety of irreverent six-second videos.

Two other Awesomeness films, “Shovel Buddies” and “Smosh: The Movie,” are in the works.

YouTube, the primary medium for content from this new age of creators, has responded by trying to join forces with some of its new competition.

In late April, the Google Inc.-owned video platform announced a partnership with Awesomeness to produce and create up to six feature films with online video stars through 2016, with the movies to debut on YouTube first.

Though Awesomeness declined to disclose how much revenue “Expelled” generated, DreamWorks co-founder and Chief Executive Jeffrey Katzenberg referred to the film on a recent earnings call as “very successful,” adding that it was profitable.

In the quarter ended March 31, DreamWorks reported that its new media division, of which Awesomeness is the dominant player, generated $4.6 million in revenue, up from $4.1 million a year earlier.

“Expelled,” which viewers can buy for $10, topped the iTunes sales chart a day after its release, a slot typically reserved for blockbuster movies. The movie stayed in the Top 10 for four weeks, and is also available for digital download on Amazon’s Instant Video service, Comcast, Google Play and several other sites.

Chernin Group founder Peter Chernin, former president and chief operating officer at News Corp., has been shaping Fullscreen as a feature production company in its own right. Producer Michael Goldfine has been named its chief content officer, and the company said in January that it has three films in its queue, all of which are expected to star social media celebs.

Fullscreen did not respond to requests for an interview.

Drew Baldwin, founder of Tubefilter Inc., a site that covers the online entertainment market, said that these types of movies have so far cost between $500,000 and $2 million to make.

Not only are they cheap to produce, Baldwin said, but the projects have built-in marketing thanks to their cadre of plugged-in stars.

“From all indicators, they’ve been very successful financially,” he said.

What’s more, added Anthony Wible, a media and entertainment analyst at the Philadelphia office of Janney Montgomery Scott, these films are not reliant on box-office performance as the primary measure of success.

“When you put out ‘Kung Fu Panda 3,’ there could be a snowstorm or the marketing could be off,” Wible said. “There are a lot of variables you can’t quite get your hands around.”

The teenage fans of YouTube stars represent a large, loyal audience that rabidly consumes every video their favorite creators post, typically on smartphones glued to their hands.

“Expelled,” for instance, received 3.9 million mentions on social media in the period spanning eight weeks prior to its release through the 21 days after, according to data compiled by United Talent Agency and analytics firm Rentrak, which together track audience conversations about movies. The second-most-buzzed-about film in that period, 20th Century Fox’s “The Fault in Our Stars,” generated 2.3 million mentions.

“It’s really interesting to see how the movie stars of tomorrow have built up their fan base and bring that crowd with them to their projects,” said Bouttier, who also served as an executive producer on “Expelled.”

In a throwback reminiscent of Hollywood’s old studio system, when stars were under contract to studios, Awesomeness also owns Big Frame, a talent management company that represents a large roster of YouTube stars. Though Bouttier said there’s no mandate to cast the company’s clientele, it certainly makes things easier.

“It happens a lot,” he said. “It’s a very frictionless environment to work together.”

Fullscreen operates a management division, too.

Casting director Ivy Isenberg, who works on the “Annoying Orange” show produced by Culver City’s Collective Digital Studio, said it’s no surprise that these companies are looking to work with YouTubers and social media stars in as many ways as possible.

“Hollywood is always going to find a way to monetize talent,” she said, adding that new technology platforms are as good a way to find potential breakout stars as any of the traditional venues, such as comedy improv groups.

“If a hundred million people like something,” she said, “You have to start to listen.”