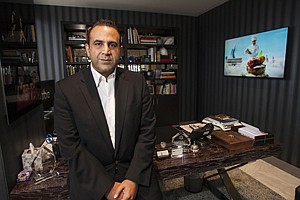 Having recently returned to his corner office on L.A.’s Miracle Mile, a rejuvenated Sam Nazarian is settling back into his chief executive role at SBE Entertainment Group after a self-imposed hiatus that followed his confession to Nevada gaming regulators about his illegal drug use.

The return hasn’t been easy. Nazarian was greeted with a revolt from a handful of partners. One group rescinded a $500 million commitment to fund future projects; another removed SBE as its partner on a downtown L.A. development; a third scrapped plans to let Nazarian run its gaming operations in Las Vegas.

Nevertheless, during an interview with the Business Journal last week, Nazarian was all smiles as he recounted SBE’s accomplishments through the years. His demeanor showed more resemblance to his past reputation as a party boy nightclub owner than his contrite manner just a few months ago in his hearing before gaming regulators.

Nazarian returned in March after he voluntarily stepped down for about 10 weeks. Much of that time he said was devoted to self-reflection as he stayed at one of his homes in Big Sky, Mont., surrounded by mountains, and later at another home along the beach in Cabo San Lucas, Mexico. It was the first significant amount of time he had spent away from SBE since he founded it in 2002. (SBE stands for “Sammy Boy Entertainment;” Sammy Boy was Nazarian’s boyhood nickname.)

“Since I was 20 years old, I was going full steam ahead,” Nazarian said. “When milestones happen in your life, you have to recognize why they happen. I’m 39, but sometimes I feel like I’m 69.”

SBE, which has interests in more than 80 restaurants, nightclubs and hotels, is moving forward with a long-term strategy that calls for selling many of its real estate holdings to focus on managing.

That plan was illustrated last week when SBE announced the $200 million sale of its SLS Beverly Hills hotel to Torrance marketing and hotel firm Sunrider International. SBE will continue to operate its brand at that property.

Thomas Morone, hotel asset manager and business adviser at CHMWarnick in Century City, said the perks of managing properties are far greater for hoteliers than owning the assets. For starters, management deals are purely fee driven and generate a steady flow of revenue without the financial risks that come with an unpredictable real estate market and fluctuating interest rates.

“The management business is a relatively low-risk business and if you’re really good at it, people flock to you,” Morone said. “It’s a good job if you can get it.”

Nazarian was born in Iran but fled with his family to Santa Monica during the Islamic revolution in 1979, which made the country dangerous for Jews. Alongside his three siblings, parents, uncles and aunts, Nazarian lived in a hotel for the first several months in America.

That industry is also where Nazarian got his start. When he was 20, he discovered the walkie-talkie technology that Nextel Communications Inc. had just developed for cellphones and the young entrepreneur immediately became obsessed.

He recalled “stalking” the West Coast general manager for six months and camping out in front of his Long Beach office to convince the company to allow him to distribute the product. After Nextel finally agreed, Nazarian founded Platinum Wireless, which he said eventually became Nextel’s largest distributor before he sold it after three years.

“It was a fun time. I loved all aspects of that business,” he said. “A lot of people don’t realize the reason I left was because my dad wanted me to work for him on the real estate side of his business.”

That’s when Nazarian got his first taste of hotel development. He and his father teamed up with Venice developer Brad Korzen to purchase the Avalon Hotel in Beverly Hills. After that, Nazarian invested in nearly two dozen boutique hotels with his father before deciding in 2002 to branch out on his own and create SBE.

At the helm of SBE, Nazarian delved into the nightlife industry by buying the Coconut Teaszer, a rock-and-roll bar in Hollywood he transformed into a nightclub.

Now, SBE counts the Abbey Food & Bar in West Hollywood, a stake in the Umami Burger chain and the Redbury Hollywood hotel among its holdings. Restaurants and nightclubs – primarily clustered in West Los Angeles, Miami and Las Vegas – make up the bulk of its portfolio.

Of the 80 properties SBE counts in its portfolio, about half are owned. The balance are operated on management contracts or part of branding deals. But the long-term goal is to own only one-quarter of its hotels and manage the rest. At the same time, SBE wants to inject its restaurants and nightclubs into its hotel portfolio, which Nazarian said makes for a more streamlined operation.

“When you’re building brands, you’ve got to put your money at risk. And that’s what we did,” he said. “Now that we’ve shown we’re profitable, we don’t necessarily have to prove our concept.”

More deals, similar to the SLS Beverly Hills sale, are in the pipeline, he said. In fact, Nazarian said, SBE is very close to completing the sale of its SLS South Beach hotel in Miami to an international buyer.

Just days after he returned to SBE, the company revealed plans to expand into Mexico with five resort hotels.

That would bring to 11 the number of projects the company has in various stages of development. Of those projects, SBE owns the hotels in Philadelphia, Miami and New York. Despite his goal to manage rather than own most of the properties, Nazarian said it’s important to plant its flag in a new market by owning its properties before, potentially, spinning them off.

“That’s how we’re going to grow,” he said. “It’s branding and managing properties vs. owning the assets, which requires a lot more capital. It’s not unlike what most of the other major brands – Marriott, Hilton, Hyatt – are doing.”

At the same time, substantial capital might now be tougher for Nazarian and SBE to secure.

But the three Cain Hoy principals left the board upon Nazarian’s return in March. An affiliate company is still lending SBE the $168 million, but a person close to the private equity firm said the partners have scrapped plans for any additional investment. The principals declined to comment. It remains unclear whether the departures were related to Nazarian’s drug-use testimony; the person close to Cain Hoy said it just didn’t make sense to continue the partnership.

Nazarian said he and his family put a substantial amount of money back into SBE, and he might work with Cain Hoy again in the future. For now, everyone agreed to just “hit pause and get to know each other a little better.”

“We made the decision not to move forward with SBE in early January and shared that with city and county representatives at that time,” said Ron Demeter, a Related spokesman, in a statement. He declined to comment further.

What’s more, San Francisco investment firm Stockbridge Capital, Nazarian’s partner in the SLS Las Vegas Casino & Hotel that opened in August, restructured its agreement with SBE, allowing it to operate everything but gaming.

Nazarian had not yet begun operating the gaming component, as he was still in the license application process. It was during that process that the Nevada Gaming Control Board uncovered Nazarian’s recent cocaine use and about $3 million in payments to convicted felon Derrick “Smokey” Armstrong, which the SBE founder later characterized as extortion.

Nazarian’s admissions did not stop him from obtaining his license, however. The gaming commission ultimately approved his application on the condition that he take random drug tests.

Despite that approval, Stockbridge, the primary investor in the project, has not revealed plans to let SBE run its gaming operations.

Another uphill battle for SBE is now brewing in Los Angeles Superior Court. An investment partner in the SLS South Beach hotel in Miami – the one that could soon be sold – accused Nazarian last month of breaching a contract and bilking it of its original $8 million investment.

The investor, 4 Corners Holdings, claims its stake in the Miami hotel was reduced by Nazarian when he brought L.A. real estate investment firm CIM Group in as a partner. SBE, 4 Corners alleges, gave CIM a better deal in Florida to secure prime terms on another project in downtown Los Angeles.

“We just have a feeling there are certain things that Sam received on the side,” said attorney Scott Gizer, who’s representing 4 Corners. “On the other transaction, he doesn’t have us as a partner. In our opinion, he found the one place he could stiff us.”

Nazarian called the claims meritless and unfortunate. But, in general, he said disputes are normal for any business.

“When you’re a high-profile figure, whether you like it or not, the rocks just get bigger,” he said. “You have to have thick skin sometimes.”

Still, he said, the future at SBE looks bright. He wouldn’t disclose financial figures – the company is private – but said the first four months of 2015 have seen a 30 percent increase in revenue and profitability compared with the same period last year.

On a personal level, Nazarian continues to stray further from the party scene to focus on business and family. While he works out of a several offices – including the top-floor corner suite in the white tower across from the Los Angeles County Museum of Art on Miracle Mile – he spends most of his time in Las Vegas, where he now lives with his fiancée, Emina Cunmulaj.

Looking ahead, Nazarian is focused on putting his recent challenges behind him and “hopefully never making the same mistake twice.”

“Sometimes these challenges, they come into your life for a reason,” he said. “I’m very happy with my reputation and I’m very proud of my company.”