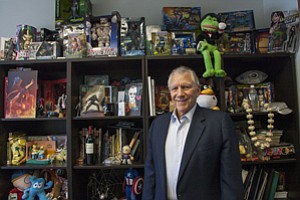 Character Driven: Gill Champion, who Stan Lee calls ‘the brains behind the outfit,’ at Pow Entertainment in Beverly Hills. Photo by Ringo Chiu.

There is an arc to the life of the characters in the world of comic-book legend Stan Lee: A flawed person, tested by extraordinary circumstances, somehow taps a reservoir of strange power that allows them to overcome the odds and fight evil.

Now, at age 92 and on the brink of overtaking Steven Spielberg as the producer with the highest-grossing box-office total in history, Lee might be facing one of those extraordinary circumstances himself.

The superhero icon, who works daily at his Beverly Hills intellectual property company, Pow Entertainment, is facing a cash crunch that came with the end of a contract with Walt Disney Co.

Since 2010, Pow had relied on an agreement with Silver Creek Pictures, a Disney affiliate, for the bulk of its revenue. The deal, which provided $750,000 a year to the company and an additional $1.25 million in consulting payments to Lee, lapsed at the end of last year, leaving Pow scrambling.

The company, which trades on the Over-the-Counter market for a few cents a share, said in its most recent annual report that it was “exploring various other sources of revenues, but there can be no assurances that we will be successful in finding other revenue streams sufficient to support our operational requirements and we may need to scale back operations, defer executive salaries and reduce staff members.”

Still, Lee is banking on the strange power that has allowed him to create such powerhouse entertainment franchises as Spider-Man to bring the evil cash crunch to heel. He’s been hard at work creating characters – hundreds of heroes that can be licensed for film, TV, merchandising and other opportunities around the world.

“We have been amassing a library of 500 new characters and working on projects across the gamut – from movies, television, games and digital publishing to a slate of Bollywood and Chinese films,” he said.

The burst of activity is all part of a legacy plan to keep Stan Lee characters entertaining audiences around the world for generations.

Among his latest creations is Chakra the Invincible, an animated superhero for the Indian market; “Lucky Man,” a live-action series for British TV’s Sky 1 and Carnival Films; and even Stan Lee himself as a character in video game “Hero Command.”

Overseeing it all is his business partner, Pow President Gill Champion, whom Stan affectionately calls “the brains behind the outfit.”

“Our mission is show business,’ said Champion, 73, putting an emphasis on “business.” The aim: “To create new IP that we develop internally, and create franchises out of, by looking to partner with third parties who contribute the financing, the licensing and other ancillary opportunities.”

Champion credited Lee’s ongoing creative drive with feeding the enterprise, which was formed in 2001 after Lee’s departure from Marvel Entertainment, which was subsequently purchased by Disney for $4.2 billion in 2009.

“The characters spring from the fertile mind of Stan, who when looking at what to do with the post-Marvel chapter of his life, saw this opportunity to develop more characters that would continue his legacy for many more years,” he said. “We’re aggregating a lot of IP thanks to the fact that he’s still creative and healthy, his writing gets better as he gets older and he doesn’t feel a day over 91.”

Having helped create the Marvel universe and serving as its president and publisher, Lee went on to launch Pow, which stands for Purveyors of Wonder, which went public in 2004. Lee, who holds a 25 percent stake in the business, is in the office by 9 every morning and still works as hard as ever, preferring the workplace to the golf course. A trust in the name of his wife holds another quarter of the company’s shares. (Champion has a 19 percent stake in Pow and Disney holds a 10 percent stake.)

Despite his advancing years, the mythmaker continues to win the admiration of the industry for giving the young audiences so craved by Hollywood exactly what they want.

“Teenagers aren’t a foreign species and Stan Lee seems to know that better than anyone in Hollywood,” said Jack O’Brien, editor of pop culture and humor website Cracked.com. “You can track their habits of consumption and flow-chart the migratory patterns of their tastes, but the only thing that really matters is your ability to answer the question: ‘You know what would be cool?’ Stan Lee has always had an innate ability to answer that question without consulting a single flow chart.”

The mastermind behind the Avengers and other iconic characters also continues to connect with comic-book fans in his home city by running his annual comic-book convention, Stan Lee’s Comikaze, held since its launch in 2011 at the Los Angeles Convention Center. The event is designed as a throwback to the early days of bigger conventions like Comic-Con International, allowing creators and fans to meet.

But Lee, whose title at Pow is chief creative officer, is also reaching far beyond Los Angeles by exploring partnership opportunities in China, especially in the thriving movie business.

“Movie attendances in America have been on a fairly level plane in recent years,” said Champion, “but the numbers are expanding hugely in China, and with the rapid building of movie theaters over there, we can see China overtaking the U.S. in terms of attendance and box office in the near future. There are big opportunities for Pow there as the thirst of consumers for the kind of storytelling Stan is known for makes that a huge potential market for us.”

He said a number of projects are in various stages of development, including some superheroes of Chinese origin designed to instill both cultural pride and international appeal.

“We also have Japanese and Hispanic characters in development,” added Champion. “Why should there only be superheroes from the West? So many other countries are rich with mythology and so there’s an opportunity to weave Stan’s characters into different cultures.”

One of those is Chakra the Invincible – a Mumbai boy who protects his city by developing a scientific super suit that activates the mystical chakras, or energy points, of the body. It was developed as a multimedia property with entertainment company Graphic India, whose chief executive, Sharad Devarajan, said in a statement, “Stan Lee’s characters are beloved from Boston to Bangalore, and Chakra continues that tradition.”

Pow has a staff of eight in Beverly Hills, striking partnership deals in each territory to bring in writers, cultural advisers and other personnel on a case-by-case basis. The costs of production are borne by other parties and not by Pow, which outsources the labor intensive aspects of production.

Other recent partnerships have been formed with the likes of Disney Publishing Worldwide and North Hollywood video-game company F84 Games.

Especially after the end of the deal with Disney, Pow can certainly use the revenue.

The company saw a net loss of less than $100,000 in 2014 on sales of $2.4 million, an improvement on a loss of nearly $400,000 the year before on roughly equivalent revenue. But the future is an unknown without the Disney revenue.

Champion wouldn’t talk about the financials.

“It’s not our policy to disclose revenues or discuss the stock performance, but we’re very happy with how with this business model to build franchises based on Stan’s brand and ideas is progressing,” he said. “We are not a big studio like Disney, but Stan is certainly another Walt Disney when you consider the amount of characters he has created and all the revenues those characters have generated.”

Superhero blockbuster “The Avengers: Age of Ultron,” based on characters co-created by Lee and released by Disney’s Marvel Studios unit, should hit $400 million in the U.S. box office in the coming days. That will be enough for Lee to surpass Spielberg’s $6.8 billion total domestic grosses and further cement his place among show business legends.

Not bad for someone who started out writing out comic books when they were the low man on the entertainment totem pole but has seen his creations become the biggest thing in movies.

“I sure am a lucky man,” added Lee, who is happy to share the credit for his latest business success at Pow, saying, “Gill Champion has been instrumental in developing my brand and making sure my legacy lives for generations to come.”