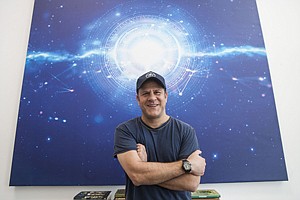 Restaurateur Adam Fleischman is cooking up something new – and perhaps a little weird – but not in the kitchen.

The founder of Umami Burger and co-founder of culinary incubator AdVantage Restaurant Partners in Westwood last month launched what he expects will become a consulting firm – one that uses concepts he says follow in the footsteps of Isaac Newton and Albert Einstein and can be applied to building valuable businesses.

Called Continuum Physics, the business for now is a website introducing philosophical concepts Fleischman, who’s in his early 40s, said he’s been developing since he was young.

For now, the site presents the first of what he said will be several books. Some excerpts from the online tome, “Lex Naturalis,” which is designed to look like a medieval text: “Time exists differently than we know it. It is not just the linear passing of a moment that vanishes for another: It can be as physical as space; a coiled, compressed power.

“A painting cannot be judged on the canvas alone, no more than love is a function of two people together in a room: the shared temporals of the experience are what seal the deal.”

Fleischman has plans to expand the website with more of his writings and other content as well as to advise other entrepreneurs based on the principles he’s developed. He spoke with the Business Journal about his ideas and how he thinks they can help business owners create value.

Question: You’ve had success in the restaurant business, but this new venture is more about science and philosophy. What led you to launch it?

Answer: I got the idea to start it in the 1980s. Philosophy was always an interest of mine. I was unhappy with philosophy in the sense of trying to get anything tangible out of it, so I moved the focus into the physical world. So, when I started to go into restaurants I was very versed in physics and I wanted to apply that to my restaurant business. It was extremely helpful and extremely practical, which was the beauty of science over something like philosophy or self-help, how-to books.

What exactly is continuum physics? And “Lex Naturalis”?

Continuum physics is the field and “Lex Naturalis” is the book – the first book. It means “Laws of Nature.” It’s really the fundamentals of what the science is all about. It outlines all the laws of physics as they apply to human life rather than just a strictly natural world – like orbits and atoms – which we focused on for thousands of years.

What’s an example of a concept from continuum physics someone might use in running their business?

What continuum physics shows is how value is created, and the whole point in starting a business is to create value. So, if you’re a painter and you’re spending $10 on a canvas, you hope one day your canvas will be worth $1 million. It’ll still be worth $10 but you want to sell it for more. That’s value creation. It’s really about how certain products accrue value where others don’t.

It’s hard to see the practical application of what you’re saying. Have people expressed skepticism about all this?

The only skepticism people have is when they just don’t understand it, or they’re skeptical that there’s something new under the sun. People think everything’s been done but it hasn’t. The world of physics hasn’t been updated very much. You’ve had classical physics, Newton and Einstein. So, really there’s only been three movements in the last 2,500 years. Mine is being applied to human actions. It’s a totally different field.

You said you prefer science to self-help. How is this different from a self-help book?

It is self-help, but it’s not traditional in any way. I have lots of books that I’ll be publishing on continuum physics that will be on the website. The plan is to convert ContiuumPhysics.com into a paid website. People can subscribe to it for a nominal fee and get updated content when I release new books, video content and writing materials. The consulting model will be more traditional consulting but via the physics so that people can run their business based on the principals of “Lex Naturalis.”

Continuum physics aside, how has operating a business changed from when you first started?

You can’t be a master of one anymore. Ten years ago, I found that a lot of businesses were much more focused. Today, they have to be involved in more things because people are coming at you from different angles. They want to see the social media aspect and they want to see you on the Internet. I think a multiple disciplinary-type focus is where everything’s going. And I can see the day when every business will have a continuum physics department just like how they have a social media department.