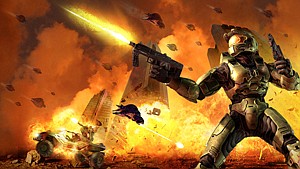 Once Johnny tosses aside his G.I. Joe in favor of a video-game controller used to shoot virtual mutants in a computer-generated world, makers of traditional toys risk losing a customer.

That’s why Malibu’s Jakks Pacific Inc. and El Segundo toy giant Mattel Inc. are expanding their offerings to include toys, collectibles and even costumes based on popular computer and video games to provide kids – and adults – with physical products from the virtual worlds where they play.

Jakks this year has invested in new licenses to make action figures and costumes based on Microsoft Studio’s blockbuster “Halo” video-game franchise and on an upcoming movie based on online computer game “World of Warcraft,” published by Santa Monica’s Activision Blizzard Inc.

Mattel, too, is getting into the gaming world. The company last year acquired Montreal company Mega Brands Inc., which makes Lego-like construction sets based on video games including “Halo” and Activision Blizzard’s “Call of Duty” war-game franchise.

Entertainment licensing expert Ken Markman, chief executive of L.A. consulting firm KKM Global Brand Strategies, said the video-game market is so large, and growing so quickly, that toy companies have to find a way in if they want to stay relevant.

“Barbie used to be for kids from 2 to 11, and now she’s in the realm of 4 to 6,” Markman said. “Where are kids migrating to? Three places. One is social media, two is sports and three is games. Games allow another platform for a character to be experienced in or on.”

For the toymakers playing in this space, the strategy makes sense in several ways, said Stephanie Wissink, a toy industry analyst and managing director at Piper Jaffray Cos. in Minneapolis. The market for game-based toys, although relatively small, is growing within the overall market for licensed products based on movies, cartoons and other content.

Toys for kids are mostly purchased during that year-end period, Wissink said, whereas many of the costumes and collectible items linked to popular games can be year-round sellers.

But there are risks, too. The market for licenses is highly competitive, and game publishers can demand expensive royalty payments, which often have to be paid in advance. Toymakers could have to pay extra fees if they don’t sell as many toys as licensing agreements call for, Jakks executives said.

In addition, some games don’t last long. Some franchises, such as “Halo,” release a new title every few years, meaning toys based on older versions could soon seem dated, Wissink said. That’s problematic for toymakers, especially if they’ve already paid upfront for a license.

With its upcoming “Halo” products, Jakks is squarely targeting the collector market. Action figures based on the video game will be nearly 3 feet tall and very detailed, said Tara Hefter, vice president of licensing for the company.

Target customers are older teens and young adults who have aged out of playing with action figures and into collecting and displaying them.

Iconic characters in particular, such as “Halo” series protagonist Master Chief, have huge potential with the collector market, Hefter said. Analysts estimate the market for entertainment-based collectibles is worth about $1 billion annually.

Jakks is targeting a wider market with its newest license to make action figures, plush toys and play sets for the “Warcraft” movie, produced by Burbank’s Legendary Entertainment and due for release in March of next year.

Toys would likely appeal to fans of the game, but Wissink said the film should widen the “Warcraft” audience and create more potential customers for Jakks’ products.

Markman said that’s probably why the toymaker didn’t obtain the game’s licensing rights until a movie based on it was planned. A movie will give kids and teens more to identify with as the game’s characters will now be part of a story, rather than just a game with little narrative arc.

“If you don’t have a story, all you have is plastic,” he said.

For both “Halo” and “Warcraft,” Jakks also plans to sell Halloween costumes and dress-up outfits based on the games’ characters through its Disguise Inc. costume division.

Buyers for this market include not only children, but also dedicated fans of the games who dress up to attend fan-focused science-fiction and fantasy events such as San Diego’s Comic-Con International and the Electronic Entertainment Expo, or E3. These are hugely popular and getting more so, Hefter said.

Mattel executives declined to comment for this story, but the toymaker noted in its 2013 annual report that competition between physical toys and video games is “intensifying.”

Despite that, Mattel’s presence in the game-based toy space was limited until last year, when it introduced figurines based on the “Minecraft” computer and video game and spent $460 million to acquire Mega Brands.

Mega Brands makes constructor sets of micro action figures, vehicles and other items that collectors can build and then display. Many of the sets are based on video and computer games, such as “Assassin’s Creed” from game publisher Ubisoft Entertainment.

Without Mega Brands, Mattel itself likely wouldn’t make as many products based on electronic games, Wissink said, because the market is still too small. But as a growing segment within the overall licensed-product market, the purchase makes sense, giving Mattel a foothold in tomorrow’s toy market.

“It’s all part of the ecosystem of building a property, a brand,” she said. “That’s the most important part.”