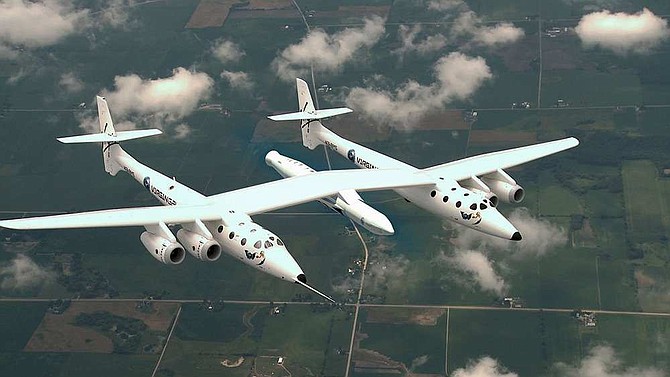 LauncherOne hanging below its mothership WhiteKnightTwo

Outer space could soon get a little more crowded.

The satellites will be launched using Virgin Galactic’s yet-to-be-tried LauncherOne rocket, a rocket that is slung under a specially made jet aircraft, flown to high-altitude and then fired.

LauncherOne, initially proposed in 2012, is designed to carry smaller satellites weighing up to 500 pounds into orbit. The rockets are billed as more flexible and efficient than traditional rockets because they launch from the air rather than from the ground. A staff of 120 is developing the rocket in a manufacturing facility in Long Beach and it is being tested in Mojave.

OneWeb, a British company aiming to provide worldwide Internet access via transmissions from an orbiting net of satellites, announced its formation today and $500 million in funding, some of which came from Branson.

Virgin Galactic called the contract with OneWeb one of the largest commercial launch contracts in history. Should the first 39 satellite launches go well, OneWeb has an option for 100 more.

Virgin Galactic is part of British Virgin Group, Richard Branson’s umbrella company. It is also taking pre-orders for $200,000 tourist flights to space. Demand is said to be strong, with a waitlist in the hundreds that reportedly includes celebrities Ashton Kutcher and Lady Gaga.