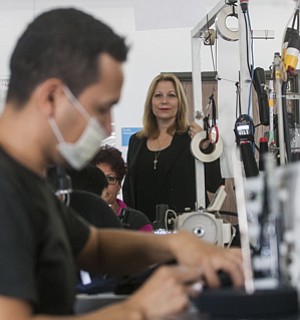 Operating with $234 million in long-term debt at 15 percent interest, the company needs to slim down even as it tries to boost sales. If successful, those steps could pave the way to refinancing its debt load on far more favorable terms.

The operational changes Schneider outlined at a June 9 Piper Jaffrey Consumer Conference in New York were accompanied by an announced shift in how management would view the business going forward. While still a manufacturer, American Apparel will think of itself as a retailer.

Schneider posted the turnaround plan on the company website earlier this month, and the consensus among industry experts who reviewed it for the Business Journal was that it looks solid. The catch, as with all plans of this nature, is that success depends on execution.

“I believe in Paula; she’s tough and worked amid difficult environments before and she’s capable and not afraid to make decisions,” said Brien Rowe, managing director and group head of consumer products for Intrepid Investment Bankers in Los Angeles. “But there’s a lot of work to be done and a huge execution challenge, and she’s time-constrained to be able to make the appropriate changes because of the heavy debt load and heavy debt service. It would be hard for everyone.”

Rowe points to Schneider’s intention to reduce apparel items by 30 percent, cut money the company spends on each store by $325,000 and close unprofitable shops when leases are up. Doing all that would free up capital, he said.

That the focus is now on retail operations is clear. Schneider aims to go after what she said is stagnant product with improved offerings by revising inventory controls; creating systems in which products could be tested in stores; and hiring more designers to address design, quality and fit issues.

“Quality and fit are always really important,” Greaves said. “It’s one thing a lot of consumers complain about with some of these competitive retailers. That would make them a better choice. Even a teen who wants fast fashion may spend only $20 on an item, but they don’t want it to fall apart.”

Greaves pointed out that while Schneider’s plan calls for increasing store traffic, it is short on details about how that can happen.

In addition to overhauling stores inside and out, and investing in new radio frequency tracking systems, American Apparel will have to comply with the higher minimum wage in Los Angeles; all expensive and coming at a time when sales are decreasing.

In her speech in New York, Schneider told the audience that creative marketing is American Apparel’s most valuable asset.

“We have strong brand awareness,” she said. “Our challenges are not brand challenges, they’re execution challenges. This brand is a very, very popular brand.”

Ira Kalb, an assistant professor of clinical marketing at USC’s Marshall School of Business, said Schneider’s plan makes business sense but is missing the marketing needed to get the details going.

The plan does not go into any depth about whom American Apparel is targeting with its products and marketing, he said, and it doesn’t indicate that the company knows what this audience wants in their products and from a retailer, or that it will watch that going forward.

“People’s tastes change and you have to make changes with the marketplace,” Kalb said. “What a lot of companies do is have some success and get stuck in a groove. Now they have to listen to the marketplace and react and be open-minded.”

Reaching out to fashion influencers – people with large social media followings who can tout brands – would help, he said.

Additionally, Kalb and other analysts said that while the American Apparel brand has suffered from its sexualized advertisements and highly public battles with the company’s ousted founder and chief executive, Dov Charney, evident from its decreasing sales, the company’s new advertising doesn’t seem to mark a departure from the past. In fact, the new ads are reminiscent of the old.

“It’s still suggestive,” Kalb said. “They really haven’t gotten completely away from that.”