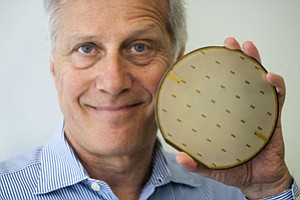 For Alex Lidow, revenge is a dish best served fast, cheap and efficiently.

The former chief executive of semiconductor manufacturer International Rectifier Corp. is still smarting from the way his family departed that company, which was co-founded by his father and grandfather in the late 1940s. Pushed out, he claims, nearly a decade ago from the company they built, Lidow went on to form a competitor, Efficient Power Conversion, just down the street from International Rectifier’s El Segundo offices.

In April, the company released what it said is a cheaper, more efficient product that could upend the $30 billion power conversion market dominated by International Rectifier.

“I am going to go after their gut,” Lidow warned. “I’m their worst nightmare.”

Power conversion involves creating tiny devices that convert electricity from one form to another, enabling all manner of electrical gadgets to function. Till now, silicon had been the preferred medium for power conversion processors, but as that element reaches the limits of its efficiency, attention has focused on new materials.

Lidow had been looking at one of those, gallium nitride, before he left International Rectifier in 2007, figuring the time when silicon would be replaced was near. The efficiency of silicon for power conversion had been improved to the point where any subsequent fine-tuning would be cost prohibitive.

“You can’t get a high return on a capital investment,” Lidow explained.

His focus on gallium nitride came, he said, because it has intrinsically better properties.

And if anyone should know, it’s Lidow. He helped invent International Rectifier’s silicon-based power conversion device, which was released in 1979 and has been the company’s core product ever since.

International Rectifier was the brainchild of Lidow’s father, Eric.

A Lithuanian Jew, Eric Lidow fled to the United States from Nazi Germany in 1937 after studying electrical engineering at the Technical University of Berlin. He arrived in the country with $14 in his pocket and no command of English, but 10 years later co-founded International Rectifier with his father, Leon. It has come a long way since then.

By the time the company was sold to German competitor Infineon Technologies for $3 billion in January, it was posting annual sales of $1.1 billion. While the family members were long gone, Alex Lidow did make money from the sale as a shareholder.

Eric Lidow retired at 93 as chairman of International Rectifier in 2008, and Oleg Khaykin, its then-president and chief executive, sang his praises, saying in a statement, “The legacy of Eric’s leadership during his 60 years at IR will remain.”

But Alex Lidow, International Rectifier’s chief executive from 1995 and 2007, painted a darker picture of what occurred behind the scenes.

“They ousted him,” he said. And the abrupt departure from the company took a heavy toll on his father’s spirit, according to his son.

“My father basically curled into a ball and almost died,” he recalled.

Though Eric Lidow lived for six more years, his son said he never truly got over his removal.

“There was no way he could let it go,” said Alex Lidow.

But the bloodletting did not stop with his father.

“A couple of the directors decided it was time for real change, that the family should be out,” Lidow claimed. “They thought they could run the company better.”

So, he said, the board found a reason to get rid of him.

In October 2007, Lidow resigned from his post after a company investigation into accounting irregularities at a Japanese subsidiary. Lidow maintains he had no knowledge of his subordinates’ actions, but accepts responsibility, albeit it with a caveat.

“There are far more egregious things people have done and stayed in their jobs,” he said.

Representatives of Infineon and International Rectifier did not respond to an interview request.

Khaykin, who is no longer with the company, could not be reached for comment.

Lidow’s separation from International Rectifier was not easy. He and the company traded lawsuits – he for wrongful termination, it alleging theft of trade secrets –before a settlement was reached in 2013.

Under terms of that deal, Efficient Power Conversion, which Lidow formed to develop gallium nitride as a medium for energy transmission, agreed to pay International Rectifier an undisclosed amount of royalties on its sale.

The deal, Lidow said, made sense from a financial perspective, due to the high cost of legal fees.

“It’s a drain, so you might as well just get these things settled,” he said. And it also allowed him to spend more time focusing on his main goal: creating a product that could break the stranglehold by the company he once ran on the power semiconductor industry.

But he needed a place to make the chips. So he turned to Taiwanese businessman Archie Hwang, whom he had dealt with while at International Rectifier. Hwang’s Taiwan foundry produces silicon semiconductors, and Lidow convinced him to manufacture EPC’s products, too. What made the deal even more appealing for Hwang was that his foundry could keep producing silicon at the same time.

Since EPC launched in 2007, Lidow and Hwang have each put $25 million into the company, of which they co-own a majority share. Lidow also recruited several former colleagues from International Rectifier to join him at his new venture, two of them as co-founders.

After years of testing, Lidow’s company went to market in April with a product he said is not only cheaper than silicon but 10 times faster.

Ohr predicts that a few hundred million units, a small fraction of the market, would be sold over the next three years as companies begin to adopt the technology.

EPC’s semiconductors cost 36 cents and 38 cents each, about 2 cents less than rival products made of silicon.

What’s most exciting to Lidow is the range of new industries made possible by the invention of gallium nitride itself, due to its enhanced capabilities. These include self-driving cars, wireless phone charging and remote sensing technology known as Lidar, all of which use components that operate at lightning-fast speed.

Gallium nitride’s application in new medical devices such as pills that contain mini-X-ray machines is also a potentially lucrative revenue stream, he said.

It is in these emerging markets that Lidow said EPC truly has a leg up on its competitors, including Infineon.

Still, Infineon has licensed gallium nitride technology from Panasonic Corp. for use in major appliances and at server farms, and Lidow acknowledged that it is worrisome to see a company as large as Panasonic enter the fray, even if it is going after different customers for the time being.

“It raises my blood pressure that a company as big as Panasonic is doing this,” he said.

Only one other company, GaN Systems Inc. in Ottawa, Ontario, is manufacturing gallium nitride chips that target the same market as EPC.

GaN’s president said he doesn’t view Lidow as a competitor.

“We’re both in the same position in terms of promoting gallium nitride as a new technology,” said Girvan Patterson. “We don’t compete.”

Lidow said their efforts are starting to have an effect.

“At first you’re shouting into a vacuum and nobody believes you,” he said. “Now the echo chamber is starting to resonate back.”