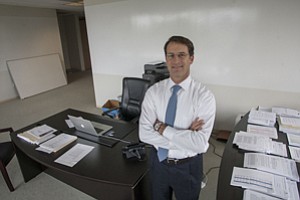 He may call it helping the little guy, but many others have a different name for it: patent trolling.

“Many companies despise what we do, but so many inventors are glad we do it,” he said. “Even though it’s not popular, I love what I do.”

Marathon’s business model, like that of other patent-monetization companies, centers on acquiring patent rights from inventors and suing companies that could be making, using or selling products or services that in some way rely on patent-protected materials.

The trick, Croxall said, is to make sure other companies – preferably big ones with deep pockets – are actively using the patent before Marathon purchases the rights. Indeed, the company will form an extensive list of possible “infringers” it can sue. The ultimate goal is to convince large companies to pay a license fee directly to Marathon and its subsidiaries.

“No one is going to take a license on a patent if they’re not using it in a product or service,” Croxall said. “I’m not interested in harming inventors or small companies. If they are a small company, they usually don’t have the money.”

Earlier this month, Marathon accused the car manufacturers of infringing on technology covered by patents it owns.

To say companies, like Toyota and Hyundai, despise Marathon’s model, as Croxall suggested, may be an understatement. Marathon and its competitors are oftentimes called “patent trolls” or, less colloquially, “nonpracticing entities” or NPEs, meaning a company that does not use a patent itself but just enforces the rights.

Mark Feldman, executive vice president and general counsel at Game Show Network in Santa Monica, said he deals with between two and five new patent disputes from NPEs a year, although none has come from Marathon or its subsidiaries. But, in general, Feldman said the disputes are an unfortunate tax on the business community.

“It’s a problem that has been growing aggressively over the last five or 10 years,” he said. “They’re really in the business of quick-hit extortion.”

But Croxall insists his model is vital to inventors and entrepreneurs who, without help from Marathon and similar firms, would never be able to enforce their right to protect their ideas.

Marathon is among a handful of publicly traded patent-monetization companies in the United States. It launched in late 2012 through a reverse merger with a mineral mining company called American Strategic Minerals Corp.

At that time, the mining company’s board had decided to change its original strategy and get in the lucrative patent business, said Croxall, who joined Marathon as chief executive and chairman that year.

One of its first big purchases came in late 2013 when it bought 17 patents from a subsidiary of auto industry supplier Delphi Automotive for $1.7 million, according to documents filed with the Securities and Exchange Commission.

The patents cover several technologies, one of which includes an automotive radar system invented in the 1990s that sounds an alarm when it detects objects in a driver’s blind spots.

Signal IP Inc., a Marathon subsidiary, last year started suing virtually every major car company, alleging they had infringed on the radar system and other patented technology. Toyota and Hyundai, both of which were sued this month, are just the most recent targets.

The terms of each settlement are confidential, but Marathon has said it expects to reap as much as $1.6 billion – nearly 1,000 times what it paid for the patents – once it settles with all of the automakers, according to Mike Latimore, an analyst at Northland Securities Inc. in Minneapolis who follows Marathon.

Last year’s revenue, all of which was generated by postlitigation licensing agreements, topped $21.4 million, up significantly from the previous year’s revenue of $3.4 million. Despite the uptick, however, it reported a net loss of about $3.2 million, which includes noncash expenses such as patent depreciation. When it excludes those expenses, the company reported a profit of nearly $4.2 million, or 36 cents a share.

Not surprisingly, Marathon’s biggest expense is the cost of litigation. In most cases, it pays outside attorneys a portion of the settlements it receives. That, along with payments to advisers and others, totaled $11.8 million last year.

Marathon sometimes agrees to share portions of its revenue with the inventors from whom it buys patents, Croxall said, but the company typically acquires the patents outright.

While Marathon has shown it can turn bargain-price patents into big sums, the firm also faces potential disruptions to its controversial patent-monetization industry as Congress mulls patent-reform legislation.

Still, Latimore, the stock analyst, is confident Marathon is poised to continue growing despite the uncertainty that comes with regulation – and, of course, litigation. Its biggest asset, he said, is that it owns patents in very diverse industries, including health care, automotive and wireless communications, to name a few.

“From an investment standpoint, it’s good to have diversity so it’s not all about one patent,” he said. “If it doesn’t go your way and you only have a couple patents, so much for the business model.”

Latimore rates Marathon’s stock a “buy,” with a target price at $11 – indicating lots of optimism about the firm, as Marathon shares closed July 22 at $3.02.

Regardless of its vast potential for investors, most companies aren’t likely to shift their opinions on the patent-monetization industry.

The Game Show Network’s Feldman said he anticipates patent trolls – a term Croxall hates – will continue to be a thorn in his side until there is some sort of legislative reform. Until then, the business community is likely to keep shelling out big money to defend patent-infringement disputes.

“Unfortunately, the way that the patent license and the judicial-litigation systems work makes it incredibly expensive and time-consuming to defend yourself for any significant period of time,” Feldman said.

Croxall admits there are certainly bad actors operating in his industry, but that doesn’t mean every company is out to destroy businesses.