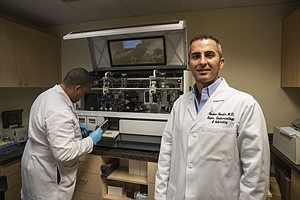 About two dozen women settled into their seats at a long table on Via Alloro’s leafy patio a couple of weeks ago as waiters poured their choice of red or chilled white wine.

The menu featured a grilled New Zealand salmon fillet and a warm chocolate tart – topped off with a discussion about how fertility starts to decline when women hit their late 20s.

This wasn’t your average weeknight dinner in Beverly Hills. It was an Egg Social, organized by fertility specialists at the city’s Southern California Reproductive Center. The events are meant to educate women about fertility and egg freezing, the retrieval and preservation of a female’s reproductive cells for future use.

“I had wanted to do something outside of the office for women about egg freezing in a social environment that wouldn’t intimidate people like an academic lecture about eggs,” said Dr. Shahin Ghadir, who’s board certified in obstetrics and gynecology as well as reproductive endocrinology and infertility, and is a partner in the Beverly Hills reproductive practice.

Ghadir and his partners started holding these mixers earlier this year, hosting socials at RockSugar in Century City and BOA Steakhouse in West Hollywood. They’re not alone.

These types of events have been happening all over the country for the last year or so and other L.A. groups have begun organizing similar happenings; part education, part marketing in an atmosphere more akin to a girls’ night out than a clinical consultation.

They’re tied to a fast-growing segment of the burgeoning assisted-reproduction industry. The global in-vitro fertilization market was valued at $9.3 billion in 2012 and is expected to balloon to $21.6 billion by 2020, according to Portland, Ore., market research firm Allied Analytics.

Egg freezing alone can cost tens of thousands of dollars. The Southern California Reproductive Center charges almost $10,000, which includes egg retrieval and freezing, facility and lab fees as well as the first year of storage among other costs. Medication can run up to an additional $5,000 and annual storage of the eggs can cost $500 more. Expenses increase if a woman needs to go through another cycle of the process to gather more eggs.

The center has six locations, two of which have embryology labs onsite where eggs are harvested from patients and stored.

Insurance will often only cover a portion of costs, and while some companies have begun to add the coverage – Apple Inc. and Facebook Inc. garnered lots of attention for adding reimbursement of the procedure to their list of employee benefits last year – the price is quite high for many who don’t get that perk.

Still, more women are showing a willingness to pony up for a shot at future motherhood.

“Most women reach the end of their fertile window around 45,” said Dr. Karine Chung, director of USC’s fertility preservation and egg-freezing program. It’s a process that begins to hasten at around 35.

Harvesting and freezing eggs allows women a chance to go back in time and use younger eggs to increase their changes of fertility.

The process involves taking hormone shots for a couple of weeks to boost the number of mature eggs a woman will produce during her menstrual cycle. Doctors then extract those eggs vaginally with a small needle, keeping them in a deep freeze until she’s ready to get pregnant.

Egg freezing has actually been around for decades; the first successful birth of a baby from a frozen egg happened in 1986. But the technology has advanced to the point that the risk of eggs being damaged during the freezing or thawing process has declined significantly.

Women freeze their eggs for a variety of reasons. Some haven’t met the right partner yet, others have but aren’t ready to get pregnant or they want to preserve the option for a second or third child conceived later in life. Still others are cancer patients who want to save their eggs before facing chemotherapy or other damaging treatments.

The Southern California Reproductive Center, formed as a fertility clinic in 1999, has noticed a similar uptick. Though its doctors saw about a dozen clients when it first expanded its egg-freezing services beyond cancer patients in 2010, it now does the procedure for more than 200 women a year.

Indeed, some of those patients have started coming from the egg socials.

Granted, it’s not a cheap way to grow one’s business. The center paid for a three-course meal for about two dozen attendees at the Via Alloro event, though it was also partly sponsored by New York genetic testing firm Recombine and Walgreen Co.’s specialty pharmacy, which sells the medications women inject during the freezing prep process.

Ghadir, who joined the center a decade ago, said attendee age ranges from early 30s to early 40s, along with some older moms who come to get the skinny for their daughters.

After running through a slideshow presentation on how fertility declines with age, how preserving eggs can buy some women extra time and what the process actually involves, the center’s specialists field questions from the audience.

On average, about half the women in attendance return to the clinic and become patients, Ghadir said.

But fewer than 10 percent of their patients have returned to use their frozen eggs thus far. It could be they’ve had children on their own or aren’t ready to use the eggs yet, he added.

The unusual marketing tactics don’t sit well with everyone, at least not at first.

“The immediate reaction of most of us in the medical community was it was in poor taste; you don’t see other aspects of medicine being marketed in this way,” Chung said. “But the more I learned about them, I don’t necessarily think they’re all bad. They’re certainly spreading awareness and providing information to a group of women about the technology and could help them and prevent suffering from infertility in the future.”

Others feel there’s a more altruistic side to the business.

“The main purpose is to get education out there,” said Wendie Wilson-Miller, co-founder of Pasadena’s Great Possibilities Egg Freezing and Fertility Agency, which matches women with area fertility clinics and has started holding its own egg-freezing parties.

Wilson-Miller has worked with prospective parents for more than a decade in a separate business, coordinating egg donation and surrogacy. She found the most common reason women came to her in search of egg donors was because they waited too long to have kids of their own.

“One of the things I’ve heard over the course of the last 16 years, more than probably anything else, is, ‘If I knew then what I know now, I could’ve frozen my eggs. I wish I would’ve had more information,’” said Wilson-Miller, 40.

Both she and her business partner, Shalene Petricek, 44, have had their eggs frozen.

The duo threw their first On Ice egg-freezing party at Santa Monica’s Viceroy Hotel in April. The evening involved mingling, cocktails and appetizers and talks from physicians on fertility and, of course, egg freezing.

About 45 people attended the first party and more than a dozen became clients, Wilson-Miller and Petricek said. Their fees, or cut of the discounted packages they arrange with clinics, can range between $500 and $1,000 a person.

Even though they had some sponsors for their Viceroy party, the events aren’t cheap. Still, Wilson-Miller said the outlay of capital is worth it.

“The press is not interested if it’s at a local pizza parlor,” she said. “We want to get the information out there, and we want people to attend. They’re more interested in coming when it’s at a nice place.”