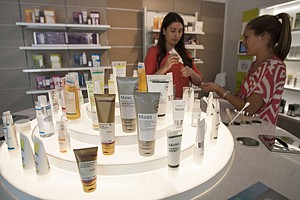 Rubbing It In: Murad products at the company’s mock store in its El Segundo HQ. Photo by Ringo Chiu.

While surfing CVS.com, shoppers might come across a bottle of Murad Inc.’s Skin Perfecting Lotion and drop it in their virtual basket. There’s just one hitch; Murad claims the chain isn’t allowed to sell its products.

In fact, the El Segundo skin care company’s cleansers, creams and masks are only supposed to grace the websites and shelves of select salons, spas and beauty supply stores. But that doesn’t stop Murad’s products from showing up in other places.

“It’s a game of cat and mouse,” said Richard S. Murad, general manager of the firm founded by his uncle, dermatologist Howard Murad, in 1989.

In truth, it’s not much of a game to the company, which sued CVS Health Corp. last month alleging the chain coaxed Murad products from authorized distributors or other middlemen to illegally resell the goods.

“It’s a big problem for any business and the Internet explosion hasn’t really helped us at all,” Richard S. Murad said. “It’s not under the radar anymore. If you Google a brand name and 100 stores are selling your product that you didn’t sell to, it gets a little crazy.”

Manufacturers of products including moisturizers, shampoos, handbags and even pharmaceuticals often sign exclusive deals with retailers to carry their goods as a way to create an air of exclusivity or to align themselves with particular markets. That, in turn, has created a black market of sorts for products that are diverted to unauthorized retailers.

Diversion, most prevalent in the beauty and fashion industries, accounted for as much as $63 billion in lost consumer goods sales in 2009, according to a Bloomberg report.

Some companies turn a blind eye to product diversions, but others, such as Murad, spend serious cash enlisting lawyers, investigators and a variety of packaging practices to root out the culprits.

“Every point in the chain is susceptible, including the manufacturer,” said Mark Riedel, an attorney with Santa Monica law firm Conkle Kremer & Engel who focuses on brand protection.

Manufacturers typically have one or more distributors throughout the country or world, and international partners tend to be more vulnerable than stateside ones, he said.

“A lot of companies will grant additional discounts to international distributors because of duties, taxes and licensing issues,” Riedel said, adding that foreign-bound ships full of goods sometimes sail right back to the United States.

Cutting out middlemen isn’t necessarily the answer, though. It can be impractical for smaller businesses to handle distribution internally – they just don’t have the resources – and larger ones might need help reaching far-flung customers.

Products are also often diverted by retailers, consumers, contract manufacturers or even the company itself through employees or in warehouse sales meant to offload discontinued goods. In addition, there can also be multiple levels of diverters in order to cull enough volume to be sold in large national stores.

“I’ve seen products diverted from salons or doctors’ offices that went to the first-level diverter, who sold it to the second level and consolidated pallets and sold them to a third level of diverter who had enough to fill a truck,” Riedel said.

Diversion can both dilute a brand’s value and wound its bread-and-butter retail customers in the process.

“The products you buy at Rite Aid and the ones you buy at the salon, in theory, the two should not meet,” Berglass said. “Most salon products try to only sell to the salon to protect the stylist and her profession because obviously if you’re able to buy it at Rite Aid, you don’t necessarily need to go to her salon and it affects her income.”

It also means the originating company can’t monitor the quality of its merchandise as well by the time it reaches the end consumer. Goods can be diluted, expired or even mixed in with counterfeits.

This is particularly frustrating to ZO Skin Health Inc., an Irvine skin care firm founded by Beverly Hills dermatologist Zein Obagi. ZO sells its treatments, some of which require a prescription, mainly through doctors’ offices.

Like Murad, ZO has sued diverters. It’s brought about a dozen cases against alleged perpetrators in the last few years and is in the process of bringing legal action against another one, according to Chief Executive Jim Headley.

The firm, which sold about $32 million in wholesale products last year, dedicates $400,000 a year to fighting unauthorized sales with legal action and cyber-investigators who scour the Internet for ZO’s products, he said.

Other brands might use hidden codes that can be illuminated by UV light, numbers etched into bottles and packages sealed with hologram stickers. Pharmaceutical companies have even begun to use lasers to make indelible marks on each of their tiny capsules.

Murad uses package markers as well as holographic sticker seals, which it claims were missing or defaced on certain of its products purchased from CVS.

A spokesman for CVS, citing the pending litigation, declined to comment.

Murad, which had more than $100 million in sales last year, spends about $250,000 a year combatting diversion and has terminated more than $2 million worth of business in about 50 accounts because of it, said Richard S. Murad.

“It’s good business and we hate to turn it away,” Murad said. “But we’d rather have no business than one that diverts from us.”

It was recently announced that British-Dutch consumer goods behemoth Unilever will buy Murad. Terms were not disclosed, and the deal should close in the next few months.

“We’re working hard to help our accounts to grow their own businesses,” Murad said. “We don’t want to make selling Murad hard for them. We want to make it easy.”