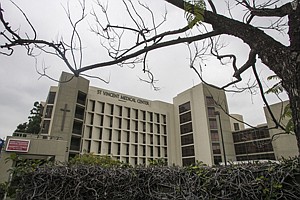 After a long, contentious sale process, the clouds could be lifting for the Daughters of Charity Health System. Not only has the group bolstered its finances, but it might be closing in on a deal for its beleaguered hospitals. A sale could be announced in the coming days.

St. Vincent Medical Center in downtown Los Angeles and St. Francis in Lynwood are two of the six California hospitals the Catholic system has been working to sell for more than a year as it hemorrhaged about $10 million a month.

The bleeding seems to have slowed after Daughters of Charity received $54 million in delayed funds in February from a state program for hospitals treating a significant number of Medicaid patients. A turnaround plan announced in April, including layoffs and service reductions, also helped.

But finally securing a buyer in the wake of state Attorney General Kamala Harris’ conditions that ended up squelching an $843 million March bid from Ontario-based Prime Healthcare Services would be a huge win for the health system.

Daughters of Charity spokeswoman Elizabeth Nikels said the organization has been working with top-tier buyers interested in acquiring the entire health system. Those include some previous contenders as well as new ones. She wouldn’t divulge who was involved, but added that the system hoped to announce a buyer by the middle of this month.

Those bidding to acquire the health system include New York private equity firm Blue Wolf Capital Partners, New York private investment firm BlueMountain Capital Management and an unnamed South Korean firm, according to Bill Rouse, executive assistant to the officers at United Nurses Associations of California/Union of Health Care Professionals. Rouse has been involved in negotiations on behalf of the union’s nurses at St. Francis.

Nikels said the system has not narrowed the search to three bidders and would not comment further.

Representatives of both BlueMountain and Blue Wolf, which are unrelated, declined to comment.

BlueMountain manages $21 billion in assets, according to its website. Among other vehicles, it invests in distressed opportunities including turnarounds and recapitalizations. It was not identified as an interested party in last year’s sale process.

Blue Wolf, on the other hand, made it to the final round of bidding last fall. Daughters of Charity ultimately selected Prime, despite UNAC/UHCP and Service Employees International Union-United Healthcare Workers West’s claims that the Ontario health provider prized profits above all else.

Those unions strongly backed Blue Wolf, which has made no secret of its continued interest in the system.

After Prime withdrew its bid in the face of stringent conditions imposed by Harris, the New York private equity firm reiterated its position.

“Blue Wolf Capital has followed developments at the Daughters of Charity Health System closely,” the firm said in a statement at the time. “We remain strongly interested in playing any constructive role that utilizes our investment capital and health care and restructuring expertise to resolve the challenges facing the System and create a stable health care provider for the communities and workers who rely on these vital safety net institutions.”

The firm, which managed about $450 million in assets as of December, according to regulatory filings, invests in distressed companies and has restructured health care organizations. Blue Wolf and Managing Partner Adam Blumenthal are known for having close relationships with labor unions.

“They have a long history of working with companies that are unionized and have fallen on hard economic times,” Rouse said.

Blue Wolf’s bid last year essentially proposed entering into a management agreement with Daughters of Charity for $24 million a year with an option to acquire the assets later, according to the health system board’s documents. The private equity firm wanted to bring in experienced health care executives, including Dr. Richard Becker, who turned around the Brooklyn Hospital Center in New York.

Rouse said Blue Wolf has restructured its bid to add more capital, a local partner and by offering to buy all the hospitals.

If a deal is reached with Blue Wolf or another bidder, it’s unclear whether Harris, a Democrat who’s been seen as pro union in the past, would invoke the same strict sale conditions she imposed on Prime. That lengthy list of conditions included running St. Francis as an acute-care hospital and offering emergency services for 10 years.

Harris later told the San Jose Mercury News that “the offer we made to Prime was unique and tailored to Prime.’’

That prompted Prime’s general counsel to warn Harris that any new buyer should have to abide by the same rules she sought to impose on Prime.