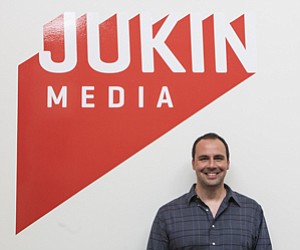 Videos are taking the Internet by storm, and Facebook Inc. is leading a charge among social networks looking to displace YouTube as the No. 1 destination to see them. But the road to market domination is paved with potholes, and Facebook is dealing with two gaping ones that have local companies such as Jukin Media and Fullscreen Inc. crying foul: It doesn’t have a way to pay video creators and can’t protect their copyrights.

“There’s clearly a tremendous amount of growth there,” Cameron Saless, Jukin’s chief growth officer, said of Facebook’s video platform. “At the same time, there’s also clearly a problem. We’re tracking thousands of instances each month where content is being put up on Facebook without a license or approval.”

Jukin, based in Culver City, owns and manages a library of more than 20,000 viral videos it licenses to media outlets and uploads to YouTube and other platforms. Its videos generate millions of views each month and rake in millions of dollars in ad revenue.

While Saless noted that some of Jukin’s videos are garnering more views on Facebook than on YouTube, some of those have been “pirated” and are racking up a ton of hits. Case in point: In February, rapper and actor Ludacris uploaded to Facebook a funny Jukin weightlifting video without permission. It has since gone on to receive more than 1.2 million views on his page, and Jukin is in the process of submitting a take-down notice to Facebook.

Unfortunately for Jukin and other rights holders, there’s little that can be done to prevent that copyright violation from happening again – and again.

A simple Google search turns up a number of third-party websites that allow users to download a video from YouTube. Once downloaded, the videos are virtually untraceable and can be reposted elsewhere.

For its part, a Facebook spokeswoman said the company is actively working on improving its solutions for identifying pirated videos and expects to have more news later this summer.

“This is a significant technical challenge to solve,” said the spokeswoman in an emailed statement. “We also have reporting tools in place to allow content owners to report potential copyright infringement, and upon receiving a valid notice we remove unauthorized content. We also suspend accounts of people with repeated IP violations when appropriate.”

That system is in contrast to YouTube’s automated rights management system, Content ID, which tracks unauthorized uses and directs all monetization from a video to the person or entity submitting a claim.

“We have a disproportionate number of folks on the rights management team focused on Facebook,” said Saless.

If Jukin and others were able to make money from these views, there might not be the same agitation over the unauthorized uses, but that’s another bridge Facebook has yet to cross.

Unlike YouTube, Facebook does not offer ads that appear before a video starts, known as preroll ads. The company said last month that it plans to roll out a suggested videos feature that will include video ads and revenue sharing for a select group of initial media partners. More ad offerings are expected to come out down the line.

The company hasn’t offered further specifics, but analysts have expressed satisfaction with the company’s shift toward video and appear hopeful that it will figure things out.

“We believe that Facebook can nearly triple its share of global online video advertising by 2017 and comprise 11 percent of the $34.4 billion market,” Anthony DiClemente, a digital media analyst at New York’s Nomura Securities, wrote in a March 17 memo. “Facebook is rapidly becoming a major competitor to YouTube.”

That’s good news for Facebook, but not such great news for owners of video content in the absence of a way for them to make money.

To deal with that reality, media companies whose work has been stolen have found other ways to monetize content and keep it online.

Many have hired Venice’s Zefr, a company that finds and monetizes pirated material on YouTube and other video platforms on behalf of nearly every major Hollywood movie studio and all major music labels.

“You don’t want to be thinking about how to change fan behavior, you want to be thinking how do I maximize that opportunity and use it for the good of my empire,” said Zefr co-founder and co-Chief Executive Richard Raddon. “Right now, Facebook doesn’t have a system for that to occur.”

Those same sentiments were echoed last months in a tweet storm by Fullscreen founder and Chief Executive George Strompolos.

“(YouTube’s) (C)ontent ID system is the right idea for (Facebook), but it requires monetization (claiming) to keep content from being removed all the time,” he wrote in a June 5 tweet.

Fullscreen, owned by the Otter Media joint venture of Chernin Group and AT&T, claims its videos are regularly reposted on Facebook without the Culver City company’s permission.

“Frankly I’m shocked that a rights holder with deep pockets has not sued yet,” Strompolos wrote in another tweet.

That’s exactly what happened to YouTube back in 2007 when Viacom Inc. alleged the streaming video service was willfully turning a blind eye toward copyright infringement on its site and therefore wasn’t entitled to protection from litigation under the Digital Millennium Copyright Act’s safe harbor provision. That legal battle lasted seven years and wound up being settled out of court early last year.

“They can’t make use of the safe harbor anymore,” said Jeffrey R. Glassman, an intellectual property attorney and partner at Beverly Hills law firm Ervin Cohen & Jessup. “They’re going to need to devote internal resources to develop Content ID-oriented software so they can show not just the courts, but also their users, that they’re doing everything under the sun to solve this problem and not just the bare minimum.”

But Jukin’s Saless said he doesn’t think it will come to that.

“There’s too much revenue at stake to go that route,” he said.