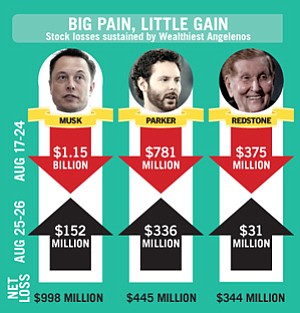 Elon Musk went to bed on Aug. 24 – the depth of the stock market downturn – about $1.1 billion poorer than he had been a week earlier. The markets rebounded after Aug. 24, but it was not enough to offset his earlier losses. By Aug. 26, Musk was still down $998 million – nearly a billion lost in the August swoon.

Musk’s paper loss was the biggest among local wealthy people in the downturn, but he was not alone. In fact, all of the Wealthiest Angelenos whose net worth is built largely on holdings in equities shared the pain of the recent stock market volatility. According to Business Journal calculations on how the market crash and rebound affected the county’s richest stockholders, at least six of the 50 Wealthiest Angelenos lost $100 million or more in the last couple of weeks. (The Wealthiest Angelenos list is published every May.)

The second-biggest loser is a new Angeleno, Sean Parker, former president and still-big shareholder of Facebook. By Aug. 26, after the market swoon and rebound, his net worth was $445 million less than it had been Aug. 17.

But Parker appears to be one of the luckier ones. Facebook’s stock, despite the August tumult, was up 11 percent year to date. Parker came in at No. 9 on the list of Wealthiest Angelenos with an estimated $5.6 billion in wealth in May.

Entertainment emperor Sumner Redstone (No. 8 with $5.7 billion in May), chairman of both CBS and Viacom, was particularly hard hit. Both companies declined more steeply than the broader market in the recent slump, with Viacom dropping 10 percent in the Aug. 17-26 period and CBS falling more than 11 percent.

As a result, the recent downturn cost Redstone $344 million on paper. However, media stocks have been down generally this summer, and his losses since May are far deeper.

Another media mogul, Michael Eisner (No. 28 with $1.9 billion) wasn’t immune to the selloff on Wall Street. The former Walt Disney Co. chief executive saw shares of the entertainment company, in which he holds about 14 million shares, fall. In the downturn, his net worth was cut nearly $138 million.

Despite the dizzying losses, at least on paper, it doesn’t appear many local wealthy people bailed out on the stock markets. At least Richard B. Jones, managing director at Merrill Lynch in Century City, didn’t see any.

“With all the crazy volatility, we did proactively reach out to clients and make them aware of what was going on. I would say virtually none of our clients panicked. Nobody sold.”

But the downturn still produced some immense losses, at least on paper.

For example, the fortunes of Public Storage shareholder Tamara Gustavson (No. 13 with $4.15 billion) fell by $225 million in the last two weeks. However, shares of the Glendale real estate firm are up almost 9 percent year to date.

For many people, the Aug. 25-26 rebound salved but didn’t cure the wound. For example, Musk, (No. 2 with $13.9 billion) saw the value of his holdings in Tesla Motors Inc. and SolarCity drop by 14 and 12 percent, respectively, in the Aug. 17-24 meltdown. Shares of Tesla rebounded in the comeback that followed, gaining about 3 percent, but SolarCity dipped further. In all, he regained $152 million in the two days after the crash, but that wasn’t nearly enough to offset the $1.15 billion he had lost in the previous days.

However, Antony Ressler (No. 35 with $1.6 billion) was not helped by the bounce back. The chief executive of Ares Management, Ressler, who became a billionaire last year when he took the Century City private equity firm public, saw shares in the company continue to slide even as the broader market rebounded. Ares’ share price slipped 12 percent overall, and that knocked Ressler’s net worth down by nearly $110 million, making him the last of the $100 million losers.

Other wealthy Angelenos and their paper losses, in descending order, from Aug. 17-26: