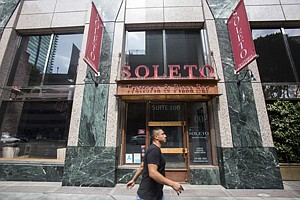 Restaurateur Armen Shirvanian, owner of Pasadena mainstay Mi Piace, believed in the potential of downtown L.A.’s South Park as a culinary mecca so strongly that when he opened Towne Food & Drink in 2012 he signed an unusually long 20-year lease.

Less than a year later, despite rave reviews, the ambitious and large 7,000-square-foot restaurant was shuttered.

Every restaurant has its particular narrative, and while Towne Food & Drink was beset by its own set of challenges – poor street-side visibility and access, along with parking limitations – its story fits into a larger tale, one that has seen a number of well-regarded downtown haunts that, like the fireworks that accompany their openings, sparkled brightly for a brief time and then fizzled out.

Of the 10 restaurants that newspaper L.A. Weekly named the “best” downtown when it compiled its list in 2013, four have closed. What’s more, there was a net loss of restaurants there last year. Chicago foodservice data firm CHD Expert reported that while 54 opened, 79 shut their doors for good.

“There’s this juxtaposition of downtown having tremendous culinary interest and success with certain restaurants, and a failure rate of other restaurants, some with Michelin-trained chefs or chefs that may have been considered as James Beard award candidates,” said Derrick Moore, a principal in the downtown office of real estate services firm Avison Young, who has brokered many downtown restaurant leases. “Restaurants will open and they are all the rage, and then you look up, and they are shuttered.”

That restaurants come and go is not surprising, but the rate at which these highly touted offerings have flared out downtown is raising eyebrows.

Industry observers cite a number of unique challenges that make succeeding in the restaurant business downtown particularly difficult, not least of which are access and limited parking. Moore, for example, also cites rising rents and unrealistic business projections.

Shirvanian said he knew Towne Food & Drink’s location, on the ground floor of the Watermarke Tower at Ninth and Flower streets, was not the best. It was at the intersection of two one-way streets, and it suffered from a lack of parking.

“We were fully aware of these challenges, but we thought we could overcome it with our food and design,” he said.

He’s not alone in that view.

Despite the rash of closures, diners downtown have plenty of choices. Nearly 150 restaurants have opened downtown since January 2013, according to CHD. But that influx has led to what might be called dining Darwinism: New offerings compete for customers and only the fittest survive.

“There’s a bit of a fickle palate downtown,” Moore said. “Patrons tend to rush a restaurant for the first six months, but then that same crowd is saying, what’s the next new place coming?”

While competition is not unique, the capriciousness of L.A. foodies is extreme.

Many restaurants with heavily Instagrammed openings struggle to be heard over the noise once their 15 minutes (or six months) of fame are up.

Larry Kosmont, chief executive of downtown real estate adviser Kosmont Cos., said poor visibility can also be a problem. He cited Soleto, which was tucked inside the 801 Tower at 801 S. Figueroa St. in the Financial District, and Rivera, which was at 1050 S. Flower, as examples of “B locations.”

Rivera, Kosmont said, suffered from a long, narrow layout with poor flow internally, and the fact that Flower is not a good retail street.

Sedlar, who relocated Rivera to his hometown of Santa Fe, N.M., could not be reached for comment. Representatives of Soleto owner Innovative Dining declined to comment.

Moore, however, disputed Kosmont’s assessment. He brokered the lease for Rivera and said the restaurant struggled because South Park, at the time, lacked the critical mass of people that makes for a successful location.

Shirvanian, stung by the experience with Towne Food & Drink, is nevertheless scouting downtown for a second location for his 25-year-old Mi Piace and is dumbfounded by how much rents have increased since his first foray into the market.

When Towne Food & Drink opened three years ago, its rent was $3 a square foot a month. Moore said restaurant rents downtown now range from $3.75 to $6.50 a square foot a month. That means a chef needs to sell a lot of pork shoulder braised sous-vide with achiote in a banana leaf wrapper at $29 to make an eatery work.

Still, many are convinced they can. Restaurateurs tend to make calculations on a best-case scenario, not conservative and sound business practices, Moore said, and as a result they pay unsustainably high rents.

That poor planning takes its toll on downtown restaurants more than it does in other cities, Kamalski said.

In the newest wave of closures, many operators failed to anticipate how much a chef-driven concept depends on, well, the chef. Mo-Chica shuttered when Zarate left. Soleto closed a year after Sascha Lyon bounced. When chef Josef Centeno left Lazy Ox to open Baco Mercat, owner Michael Cardenas tried to keep the restaurant open, hiring two other chefs in succession, but it immediately took a nosedive and ultimately closed.

Another financial consideration is L.A.’s recently passed minimum-wage law, which Shirvanian said would hike his costs and cut any profits way down.

“When you do a pro forma, you see the sobering reality of working for a 5 percent reward,” he said.

Despite a boom in residential projects downtown, dining is still dominated by the volume coming from the office crowd, which means lunch is king, Kosmont said.

The 10,000 housing units under construction and 12,000 units proposed will help the pace pick up, said Carol Schatz, chief executive of the Downtown Center BID.

In addition, later arrivals will learn from their predecessors’ mistakes, said Moore. They will be more sophisticated players who waited it out to let the amateurs test whether downtown’s culinary scene is just a fad.

“In retail, we are accustomed to cycles where numerous bars and (small) restaurants are the early occupiers, what some might call minor leaguers,” he said. “Now, we’re seeing international investment looking at (high-end) places like Bestia and Redbird and saying, ‘These are my contemporaries.’”