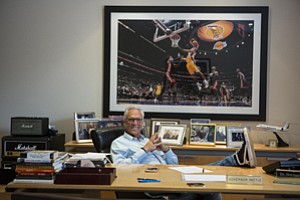 After making his name and fortune in radio as founder of broadcasting giant Westwood One, Norm Pattiz is now an evangelist for podcasts – and radio broadcasters are starting to convert.

Pattiz sold a 30 percent stake in his podcast hosting company Podcast One to Hubbard Radio earlier this month, just the latest example of an old-media company hopping aboard the new-media train – before they get run over by it.

The radio station owner in St. Paul, Minn., bought the stake for $12 million, according to a source close to the deal, valuing Beverly Hills’ Podcast One at $40 million. That deal came 10 days after another traditional media company, E.W. Scripps, bought Hollywood podcasting network Midroll Media for an undisclosed amount, rumored to be around $40 million.

Pattiz said both deals confirm what he’s been preaching since founding Podcast One in 2012.

“I’ve been saying the radio business ought to embrace new platforms in order to put the industry in a continuing growth pattern and now there’s a great deal of interest in on-demand audio,” he said. “People have seen what companies like Midroll and us are doing, how advertisers have jumped on board and they recognize the great opportunities in this area of the media.”

Podcasts are audio shows broadcast on the Internet that listeners can download or stream, consuming them whenever they wish. Podcast One has a stable of 200 shows and makes money by selling ads across that network, sharing revenue with podcast programmers.

With more consumers preferring to get their content on demand rather than tying themselves to a TV or radio broadcasting schedule, partnerships between old and new media appear to be relationships of necessity, said Jor Law, an attorney with Sherman Oaks law firm Homeier & Law, which specializes in merger and acquisition advice for media firms.

“Traditional media has now recognized the right move is to get invested with the trend toward alternative methods of content distribution instead of missing out,” he said.

Scripps and Hubbard are buying into podcasts as consumption of on-demand broadcasts has risen, with 46 million Americans listening to podcasts on a monthly basis, up from 39 million a month last year, according to a 2015 Edison Research and Triton Digital study.

Improvements in technology have played a huge part in the rise in audience figures for podcasts, Pattiz said. Years ago, podcasts had to be downloaded from the Web then uploaded to an iPod or other device. Now, they can be streamed directly to smartphones and tablets – and, in Pattiz’s case, beamed directly into his car’s stereo.

“When they first appeared eight or nine years ago, they were difficult to consume,” he said. “Now it’s so much easier, especially with Bluetooth in cars. I get in my car, switch on and start listening. It’s easier to find a podcast than a radio show these days.”

Part of the appeal for advertisers, he said, is the intimacy podcasts provide.

“Listeners most often listen to podcasts alone – with earbuds, commuting or at work,” he said. “Combined with the limited spots for advertising, this creates a more premium experience.”

Adding to advertiser appeal is that podcast consumers have higher-than-average incomes and are17 percent more likely than the average person to show loyalty to certain brands by repeatedly buying the same branded products, according to the Edison-Triton study.

Podcast One has more than 60 major brand advertisers – including American Express, Mazda and Geico – a figure that has doubled over the past year. Growth like that attracted investment queries from Hubbard and several other old-media firms, Pattiz said.

Decades before founding Podcast One, Pattiz made his name in the broadcasting business by founding and building Westwood One, which started out in Westwood in 1976 and grew into the country’s biggest radio network. The company went public in 1984 and once commanded a market cap of $4 billion.

Pattiz said he made $300 million selling off Westwood One shares over the years. In 2010, he left the company, which has since passed among several owners, including Beverly Hills private equity firm Gores Group. Westwood One is now part of Atlanta radio empire Cumulus Media.

Pattiz, 72, saw potential in the podcast space and personally bankrolled Podcast One to the tune of several million dollars. He said the company became profitable this year after significant growth.

Having grossed $2.5 million in its first year, the company did $12.5 million last year and “this year there’s a very good chance we’ll no longer be a teenager,” Pattiz said.

Podcast One’s growth and profitability is what prompted interest from investors, he said. But he still wanted control of the company and was only willing to part with a minority stake.

“Our company was big enough to consider taking in a minority investor in a strategic move which would show confidence on behalf of the financial community in our industry, create market value for the company and still give us operating control,” he said. “Hubbard proved a great fit as it’s an iconic company which has been around forever that has digital and TV assets as well as radio and a desire to stay on the cutting edge of media development.”

Ginny Morris, chief executive of Hubbard, said the company expects to make a handsome profit on its investment and to help Podcast One continue to grow.

Apart from broadcasting, Pattiz’s other passion is the Los Angeles Lakers. Memorabilia from the team fills his Beverly Hills office.

He has been a season ticket holder for more than 30 years and owns four courtside seats between the Lakers bench and the scorer’s table – the next four are owned by Ari Emanuel, chief executive of talent agency William Morris Endeavor. He credits those seats with winning him some big business over the decades.

“They’ve cost me a lot but have more than paid for themselves over the years with all the big deals I’ve done with guests I’ve sat with there,” he said.

Indeed, his business model at Podcast One relies on attracting the kinds of big names you can only lure with courtside seats.

But he said the investment from Hubbard allows the company to push the envelope by trying riskier fare and start making shows more along the lines of last year’s podcast sensation “Serial.” The nonfiction series re-examined a Baltimore murder case and has been downloaded more than 80 million times.

“We are in the infancy of podcasting but I know from my Westwood One experience what it’s like to be in at the infancy of a segment of the media,” he said. “By using a similar game plan here, we aim for similar growth in the digital age.”