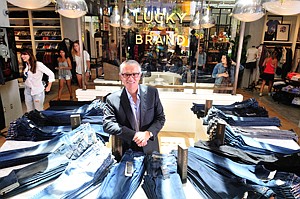 Jeans are fading, and not in a fashionable way.

But even as denim sales slump, the head of downtown L.A. denim maker Lucky Brand thinks he can nearly double the company’s sales over the next few years – to more than $1 billion annually. His plan? Sell a lot more than jeans.

Under Chief Executive Carlos Alberini, Lucky is working to refresh a brand that’s grown stale, add a slew of new products and refashion its retail stores to house all the new offerings – all part of a plan to become a lifestyle brand rather than just a denim label.

The first item on the company’s checklist was expanding its product line to include home furnishings and so-called athleisure wear – yoga pants and other athletic apparel that’s increasingly worn beyond the gym. Now, Lucky Brand is checking off another item –

The 5,740-square-foot store, which is more than twice the size of Lucky’s average outpost, features a bar serving alcohol and other refreshments, touch screens inside fitting rooms to view and request clothing as well as a conveyor belt displaying its denim. Alberini said the larger format, which will be a model for future retail stores, is necessary as Lucky plans to carry much more than just jeans and T-shirts.

“When we decided to expand the product line, the next question was: How are we going to showcase all that additional product?” he said. “It was very clear that a 2,500-square-foot store was too small of a space to feature the assortment that we were building in an effective way.”

Lucky Brand was founded in Vernon in 1990 and its jeans were hot items through much of the following decade, though Alberini acknowledges the brand, while still well known, has lost much of its cachet.

“One thing we inherited when we came here was a brand that has tremendous awareness,” he said. “That is a beautiful attribute, but what the brand lost in all those years is relevancy.”

Three years ago, the 371-employee company moved into its current headquarters, a gated two-story office in downtown L.A.’s Arts District. Soon after, in 2013, the company was sold for $225 million by New York firm Fifth & Pacific Cos. to West L.A. private equity giant Leonard Green & Partners.

Alberini credits DeMattei with bringing stability and profitability back to the brand but said the company’s growth had stalled.

“I think the growth was kind of paused when I came,” Alberini said. “The first job we did with the new team was to really learn and craft a strategy to grow the business. That was not easy, especially in this environment where everybody is seeing a lot of competition.”

That’s put many denim companies in a pinch. One local example is Commerce firm Joe’s Jeans Inc. Last month, it entered into a forbearance agreement, putting a hold on lenders calling in money owed after Joe’s defaulted on a loan and revolving credit agreement totaling more than $90 million.

Despite the challenging climate, Alberini said Lucky has continued to grow its sales.

At the time of the company’s acquisition in 2013, Lucky had annual sales of $346 million. Alberini said that figure reached $560 million last year. Now, he plans to nearly double annual sales to $1 billion over the next five years.

To get there, Lucky will be selling much more than the jeans and T-shirts that have been its core offerings for a quarter-century. And the company will be working to sell more products through all of its channels – its network of retail stores, its website and through other retailers.

“How do you plan to hit a billion dollars? The first big thing is product expansion,” Alberini said. “I think expanding the product will result in growth not only in our own retail stores but also (through) e-commerce.”

Earlier this year, Lucky launched its own lines of women’s and men’s athleisure wear, Lucky Lotus and Grey Label, respectively. Alberini said those lines have already racked up more than $10 million in sales and have been offered to wholesale retail partners such as Macy’s.

“Macy’s – they’re putting that line into additional spaces because we didn’t have that type of product,” he said. “So, when we expand to other categories, it isn’t just about our retail stores. It’s also about other channels that we use to distribute our products.”

In addition, Lucky plans to offer other new products by expanding its number of licensing partnerships, which now make up a small percentage of the business. Alberini wouldn’t disclose details as to the new product categories, saying several deals are in the works, but he mentioned watches as an example of a licensing opportunity for the brand.

Having larger and more stores will be another opportunity to increase revenue. The company estimates that customers drive an average of about 30 minutes to reach one of its 171 specialty shops. Alberini wants to cut that drive time down by adding additional shops and potentially moving existing stores to better locations.

Now is a good time for that, he said, as leases on more than half of Lucky’s stores will expire over the next three years.

Internationally, the company plans to add to its 11 stores in Canada then explore expansion in Mexico. Alberini said his long-term strategy also calls for more stores in Europe, then growing its presence in Asia.

Of course, with all the changes under way, Alberini said customers can expect to see a big marketing campaign starting soon as Lucky tries to bring in new shoppers.

“How do you make sure the customer wakes up to the new brand, to the transformation?” he said. “We are trying to do that with a new product, with a new visual presentation in the stores and an amazing marketing campaign.”