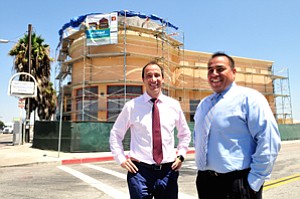 After swinging by the bank and stopping at the neighborhood supermarket, you might not need to hop back in the car to visit your doctor.

And that’s just fine with an increasing number of medical groups that have nestled themselves among nail salons, gyms and grocery stores.

Physicians have begun to move their practices into shopping centers and strip malls. That’s partly because of opportunity: Obamacare flooded the marketplace with newly insured consumers at the same time vacant retail space was slow to fill in the wake of the recession. But it’s also partly because of competition: National retail chains such as Target Corp., CVS Health and Wal-Mart Stores Inc. have added nurse practitioners and even full primary care services to some of their locations.

USC’s Keck Medicine was among the early hospital operators to move into a retail location, opening a comprehensive primary care clinic at 830 S. Flower St. in downtown Los Angeles in 2013.

“The opening of the downtown clinic was certainly a bit of shift,” said Dr. Amar Desai, chief executive of USC Care and Ambulatory Care Services. “It was the most tangible acknowledgement that we, even as an academic health system, need to extend ourselves out into the communities we serve to reach a lot larger segment of the population. A fairly significant amount of care can be delivered in an ambulatory setting not on the main campus.”

Whether the practice is associated with Wal-Mart or USC, the aim is largely the same: to draw customers by putting locations where they shop.

Bernie Kuhn, a partner at Merchant Medicine, a Shoreview, Minn., advisory firm, said whether they are spurred by competition from walk-in clinics staffed by nurse practitioners or from urgent care offices in retail settings, primary care groups are eyeing community locations to get their name out and protect higher-dollar patient visits.

“The most common diagnosis is usually some kind of sinusitis during the winter months,” Kuhn said of minute clinics and urgent care facilities. “It doesn’t require a lot of time, but has fairly high reimbursement. To the extent primary care offices can pick up some of that volume, it helps their economics and also puts them in competition with some of these (large retail) groups. … The average reimbursement level does more than pay for the extra square-footage cost and the economics are usually favorable.”

Keck has used its Flower location and other satellite clinics to draw patients to its acute care hospital in Boyle Heights, which doesn’t have an emergency room or delivery ward – two areas that usually bring many people to hospitals.

A bustling shopping center was appealing to UCLA Health System, which will open a primary care practice at the new Village at Westfield Topanga in Woodland Hills in September.

“A mall setting is highly trafficked by many patients and those looking for convenience, to get a one-stop shop,” said Dr. Mark Grossman, chief medical officer of UCLA Community Physicians and Specialty Care Networks. “They can go to Costco next door and swing by to get some medical treatment.”

It’s a first for the academic health system, which is looking to open a similar practice in another Westfield location in Los Angeles, he said.

“We expect to see increased patient volumes, especially walk-ins for urgent care, because of the mall’s central location, extended business hours and increased foot traffic,” Grossman said, though the health system declined to comment on specific revenue or traffic projections.

It is a trend that spans demographic categories.

Molina Healthcare Inc., a Long Beach managed care provider that primarily serves Medi-Cal recipients, has been seeking out space near 99 Cents Only stores and check-cashing shops for its clinics since 1991, when it opened a Fontana practice in a strip mall.

“When we look at the areas we serve we really targeted places where we could put a clinic that made it easy for (our members) to get to and get other services,” said Gloria Calderon, president of Molina Medical Management. “Most of our clinics are in strip malls.”

Obamacare has also hastened the trend of medical providers checking in to retail space.

“With the Affordable Care Act, people who have insurance now are able to have a choice instead of traveling several miles out of their way to take a kid with a fever to the ER,” said Sagiv Rosano, president of Rosano Partners, a downtown L.A. commercial real estate brokerage firm.

His company represented Westchester’s Festival Development Corp. in its recent sale of a two-acre parcel in Huntington Park originally meant for a big-box store that instead will house an AltaMed Health Services Corp. clinic.

AltaMed is among a number of medical tenants looking to be outside of the traditional medical campus and more out in the community, said Josue Garcia, a health care specialist at Rosano. Retail locations were once the venue to find dentists and dialysis centers. There is far more diversity now.

“Family practice, geriatrics, pediatrics; those kinds of doctors are tending to go away from the campus,” Garcia said.

Landlords are happy to have medical tenants fill empty spaces, seeing them as a diverse addition to their shopping centers.

“With health care, the hours are during the day and the week when traffic is the lightest for a retailer,” said Bryan Lewitt, a senior vice president in CBRE Group Inc.’s downtown L.A. office.

Large medical providers also generally have easy access to credit and are willing to sign leases of 10 to 15 years, Rosano said, adding to their appeal as tenants.

Still, medical practices have their quirks. They require more than just an empty box, which means greater tenant improvement allowances, Rosano said. Patients might also occupy the parking lot longer, which can be a strain on centers with limited room for cars.

Another challenge can be explaining to landlords that renting to medical tenants doesn’t mean they’ll have a chaotic emergency room in their strip mall.

“Many of these are regular doctor appointments. They’re not sick or injured when they go for these types of uses,” Lewitt said. “We spend a lot of our time on the educational process with owners.”

It is too early to tell whether moving medical practices off campus and into storefronts has positively impacted public health, said Dr. Ateev Mehrotra, a policy analyst at Rand Corp. in Santa Monica and a professor at Harvard Medical School, who co-authored 2013 study “On Call at the Mall.”

“Whether it’s led to higher rates of high blood pressure care or lower rates of people with uncontrolled diabetes, we don’t really know,” he said.

He added that if such patients are having difficulty getting to a provider, common sense would say that improving access will improve their management of a chronic illness.