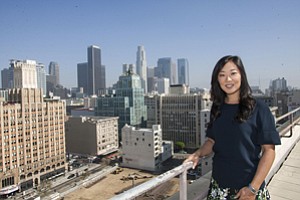 Not long ago, Jamison Services Inc. owned more L.A. office space than any other landlord. Stretching west from downtown along Wilshire Boulevard, its portfolio held millions of square feet in aging Class B buildings.

Jamison, still a major player in the Koreatown market and beyond, was toppled as the largest office landlord in the last few years as it pared back its holdings amid the recession and Brookfield Office Properties rolled up more than 8 million square feet in a series of downtown tower acquisitions.

Now, Jamison, led by Dr. David Lee, is embarking on a repositioning of sorts, converting some of its Wilshire Corridor office holdings into residential properties and, perhaps more importantly, attempting to put a new face on an operation that by many accounts was able to offer low rents because it paid little attention to the upkeep of its assets.

The new face, specifically, is that of Jaime Lee, the 30-year-old daughter of Jamison’s press-shy founder. As chief executive of Jamison Realty, the firm’s leasing and brokerage arm, the younger Lee is leading the push to rebrand the company and its properties by positioning them to capitalize on a burgeoning tech scene in and around downtown.

Her first task: rethinking the California Market Center in downtown’s Fashion District. She has hired a team of brokers to repackage parts of the 2.1 million-square-foot Class B office building at 110 E. Ninth St., traditionally leased as showrooms for fashion lines, as creative office space, in the hopes of attracting tenants to fill some of the property’s roughly 35 percent vacancy.

Finding Lee’s office on the seventh floor of the A building, one of three interconnected 13-story towers that make up the CMC, requires navigating hallways with 1960s signage and stained carpets, reminders that the building is more than 50 years old.

“People tell me, ‘You’re the next generation, you’re the new face of Jamison,’” she said. “It’s a family business so I wear a lot of hats, and it’s a constant exercise in defining roles. But right now I’m focused on a refresh of the portfolio.”

At the CMC, that refreshing will include marketing the fact that, while not technically designed as creative office, 250,000 square feet of the property is already occupied by fashion-related startups and other firms that differ from the building’s apparel core.

Among those is Tobi.com, an e-commerce clothing site based in San Francisco, which moved its L.A. branch into 30,000 square feet of converted storage space in the CMC last year.

Lee brought in Carle Pierose, a partner at Santa Monica brokerage Industry Partners, which specializes in creative office spaces, to help rethink the massive complex. Pierose said Tobi’s move was enough to convince him the task was feasible; he’s now overseeing renovations to 100,000 square feet of office space in the building.

“I saw all the open space with high ceilings here and I thought, this will be good, because there isn’t 100,000 square feet of creative space anywhere,” Pierose said. “I lease the PacMutual building and there is nothing bigger than 7,000 square feet right now.”

Though she would not say how much is being spent on the renovations, Lee said they are a multimillion-dollar project.

Jamison will also funnel in what she termed significant investment to improve the parking structure and bring Wi-Fi to the building’s common areas. Plans have been finalized to improve the bare common areas with clusters of furniture, give the food court a makeover and improve the lobby restrooms, she said, but it’s unclear when those changes will take place.

“It’s not as much a straight conversion as a focus on creating areas of the building where there can be collaboration,” Lee said.

Terry Martinez, chief executive and publisher of TLM Publishing Inc., publisher of California Apparel News, said she has worked at the CMC for 30 years and has seen improvement over the past six months.

“There’s a lot of workers in the parking garage, and they’ve completely rebranded their show signs,” Martinez said. “It’s definitely evident that they’re investing in the building.”

With the help of Derrick Moore, a principal at brokerage Avison Young’s downtown office focused on urban retail properties, Lee is also exploring the possibility of attracting more glamorous retail tenants to the ground-floor space that faces Main Street as well as the possibility of turning the roof into a dining space with a café.

The goal is to make the CMC, home mostly to wholesalers, more attractive to consumers outside of the fashion industry, like the ones who will live at developer Geoff Palmer’s 439-unit Broadway Palace development, which last month broke ground across the street from the CMC, at 928 S. Broadway.

“Jamison is doing a rebranding campaign to make sure people moving into the developments on line in the area know this is an important building downtown,” Moore said.

Fred Cordova, an executive vice president at Kennedy Wilson Properties Group, said the changes could be very profitable if enough money is put into the conversions.

“The location and size of the building present a terrific opportunity to purposely reposition the asset to accommodate creative office,” Cordova said. “It’s ambitious and will require a lot of money, but properly executed to allow for mixed use will substantially increase value.”

Despite the improvements, Jamison’s track record has led some to suggest that the effort is geared more toward burnishing the company’s image than making substantive changes to its properties.

“It sounds less like a value-add, and more like a unique marketing campaign,” said Forrest Blake, a senior vice president at DTZ Investment Holdings’ downtown L.A. office. “Jamison has not historically been a value-add buyer, and a lot of times Dr. Lee just rides the market out without necessarily putting money into the buildings.”

In the case of CMC, Blake said the changes Jaime Lee described are not expensive – assuming the payoff is leasing 100,000 square feet of space. But even with those improvements, it will be difficult for Jamison to attract a first-class creative tenant to a dated Fashion District building.

Lee conceded that Jamison has not traditionally invested in its assets, but said the time was right to put money into its properties.

“Traditionally, our model has not been value-add in the sense that we don’t flip buildings,” she said. “We’re a long-term holder and this new shift is focused on capital improvements because it’s that time to put money back into the buildings.”

She stressed that the changes won’t happen across Jamison’s 88-property portfolio overnight.

“Because our portfolio is large, and because the CMC is large, you’re not going to see an immediate impact across the board,” she said, “but we’re working property by property to improve the portfolio as a whole.”

“Koreatown is center city with great transit and parking, which is rare, and a nightlife culture that is becoming more accessible to people who are not Korean because language barriers have dropped away,” said Lee, who would not go into detail on the plan because it is still in the entitlement process. “The residential conversions are part of an organic growth process for us, just like the creative office conversions: We are growing where we see a demand.”

Jamison is also venturing into downtown development. Along with Hankey Investment Co. and other investors, Jamison is backing the development of two condominium towers proposed for the southeast corner of Figueroa and 12th streets near Staples Center.

Mark Tarczynski, an executive vice president at the downtown office of Colliers International, said the recent changes at Jamison don’t signal it will stray from its core business model.

“I don’t know that it’s changing course so much as branching out and expanding opportunities,” Tarczynski said. “I think Dr. Lee is still in acquisition mode but is not as voracious as he used to be in the past, when he was only focused on acquisition.”

In the past year, Jamison has sold seven properties and acquired four, according to CoStar.

“There really isn’t a specific strategy,” Jaime Lee said. “We’re looking for good opportunities whether in dispositions or acquisitions.”