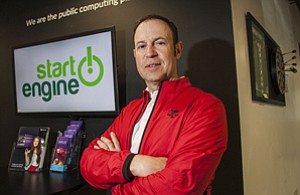 Invested in Portal: Howard Marks at Santa Monica’s StartEngine, which is developing a Kickstarter-like funding venture. Photo by Ringo Chiu.

A few years ago, Kickstarter Inc. and Indiegogo Inc. took the world by storm by giving inventors, artists and entrepreneurs the chance to raise money from millions of people at the touch of a button.

Late last month, the Securities and Exchange Commission finalized new rules that could take the crowdfunding revolution to the next level by allowing small businesses to sell shares to the general public without becoming fully registered public companies.

Anticipating the changes, which are finalized reforms to the Jumpstart Our Business Startups Act (Jobs Act) of 2012 and should become effective about two months from now, StartEngine laid the groundwork to launch an online portal in the vein of Kickstarter through which private companies can sell shares to the public.

“We raised capital and we have invested two years with a small team to make this happen,” Marks said.

The new rule, known as Regulation A+, should benefit all startups, he said, particularly media companies built around a piece of intellectual property that find themselves outside the wheelhouse of traditional financing entities – think a company that makes a movie or mobile game.

“VCs don’t like to invest in IP. They like to invest in platforms,” Marks said. “These companies will now have access to capital from their fans. Those fans feel like they’re part of your company and they become brand ambassadors.”

Until the regulatory change, private companies were able to only raise money from accredited investors: individuals who either earn more than $200,000 per year or have a net worth of more than $1 million, and firms with more than $5 million in assets.

Marks said StartEngine hasn’t finalized how big a cut of the capital raised through its platform it will take for itself, but he expects it to be less than the 10 percent typically charged by registered broker-dealers.

One such business is L.A.’s AssetAvenue Inc., which crowdfunds commercial real estate loans for borrowers that traditional banks won’t back. The company last week closed an $11 million Series A round.

While the recent reforms could open up a whole new class of investor for AssetAvenue, its founder and chief executive isn’t so sure his firm will tap that source of capital.

“Once a loan is approved, (borrowers) might need to fund it in four or five days. I’m not really holding my breath for Regulation A+ to solve that problem,” said David Manshoory, who added that even with a greater volume of investors he didn’t think funds would be able to be raised that quickly.

Elsewhere, VCs are skeptical about the impact Regulation A+ would have on the L.A. tech scene, already populated by a number of experienced tech investors.

Adam Lilling, founder and managing partner of Santa Monica venture capital firm Plus Capital, cautioned that with so many big-time investors looking at the tech market, the general public might not have access to the same types of deals as traditional investors.

“With a very hot investment market, there are a lot of individuals looking to get into ‘hot’ deals,” he said in an email. “The problem is, in venture capital, the hottest deals don’t go to passive individuals. There’s plenty of very strategic capital chasing startups right now.”

Though he’s a fan of the rules, Peter Lee, a partner at Baroda Ventures in Beverly Hills, said the large number of seed investors in L.A. would likely tamp down demand for equity crowdfunding by local tech companies.

“I think there’s more of a benefit to entrepreneurs or startups that do not have an ecosystem,” said Lee.

Regulation A+ allows for two tiers of offerings.

Under Tier 1, companies can offer a maximum of $20 million worth of securities in a 12-month period, with a limit of $6 million coming from shares sold by people affiliated with the company. Tier 2 allows offerings of up to $50 million over the course of a year, with no more than $15 million coming from affiliates.

In a key difference from private placement offerings, a traditional funding method for private companies, Regulation A+ securities can be resold – those purchased through private placements cannot.

Securities law experts said small businesses should benefit from having more fundraising options on the table.

Roger Steinbeck, a partner at Heath & Steinbeck in Santa Monica who has represented tech founders in financing arrangements, said the costs associated with a Regulation A+ offering – such as preparing audited financial statements, a necessary step for Tier 2 offerings – are probably equal to those of seeking VC money.

“I can’t see a VC not wanting audited financials if they’re going to be putting a lot of money into a company,” Steinbeck said.

And Marks pointed out that the rules allow companies to test the waters and gauge interest before making things official.

“The SEC lets you talk about an offering without committing to making an offering,” he said. “That is fundamental to undermining the notion that it will be expensive.”