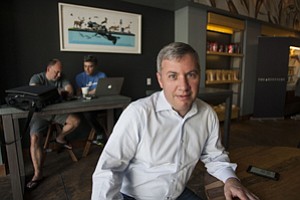 There’s never been a better time to start a technology business in Los Angeles.

Ten years ago, there were perhaps three venture capital firms that tech founders could turn to for a seed investment to help them build their core product and get it to market. But these days, that number has multiplied about tenfold as firms and angel investors, many of them minted by big money exits of their own, have emerged within the city.

“As L.A. has more and more hits, that in turn churns out a number of angel investors,” said ChowNow co-founder and Chief Executive Christopher Webb, whose food-ordering platform just closed a $10 million capital raise led by Santa Monica’s Upfront Ventures, the largest venture capital firm in Southern California. (See The List on page 27.)

“A number of these angel investors are starting to institutionalize,” he said. “That’s just the evolution of the way tech works.”

This explosion of early capital has made it much easier for startups to find the seed funding they need and put founders in the enviable position of choosing which venture firms they want to work with. And it’s caused several of the city’s top accelerators – entities set up a few years ago to kick-start the tech economy in Los Angeles – to change their business models as they figure out new ways to stay relevant and profitable.

“The historical problem with the L.A. tech ecosystem was that entrepreneurs used to leave,” said Paul Bricault, co-founder and managing director at Venice accelerator Amplify.LA. “That increase in available funding for entrepreneurs has effectively kept them here in Los Angeles.”

Of course, while fundraising is on the rise in Los Angeles, Silicon Valley firms still rule, raising $23 billion last year compared with L.A. firms’ $1.6 billion. In part, that’s because while you can probably count on one hand the L.A. companies that have created local angels, you’d need multiple limbs to tally the same list up north.

“In the Bay Area, you had Google, which spun out a thousand millionaires,” said Peter Lee, a partner at Beverly Hills’ Baroda Ventures, which typically invests between $250,000 and $500,000 of seed and preseed money in L.A. startups such as DogVacay and Retention Science. “Couple that with eBay, Facebook and Twitter, there are so many millionaires who can easily write a $50,000 check.”

One of L.A.’s most prominent angels is Brian Lee, co-founder and chief executive of Honest Co. in Santa Monica, who has personally invested in at least 13 companies, though the actual number is probably much higher. Lee recently launched Bam Ventures along with Richard Jun.

Previously, Lee co-founded Glendale’s LegalZoom, which sold a controlling stake to European private equity firm Permira in February 2014 for an amount north of $200 million. He also founded El Segundo’s ShoeDazzle, which merged with JustFab in August 2013 for an undisclosed amount.

Baroda and older L.A.-centric seed firms such as Rustic Canyon Partners, Rincon Venture Partners, CrossCut Ventures and DFJ Frontier have now been joined by a new crop of funds such as Karlin Ventures, Double M Capital, Wavemaker Partners, Plus Capital, Third Wave Ventures and TenOneTen Ventures, to name a few. Larger firms such as Upfront, Greycroft Partners and, most recently, March Capital Partners, typically invest a little later on, but have also been crucial in helping the L.A. tech scene mature.

While this influx of seed cash is great for startups, it can sometimes leave funds on the outside looking in.

Bricault recalled that a recent Amplify company had to turn away investors after securing nearly twice as much venture capital as it intended. That would have been unheard of just a few years ago.

“If the deal is hot and there’s a lot of people in L.A. that all want in, you obviously can’t accommodate every fund,” Bricault said.

That competition, he added, puts entrepreneurs in the beneficial position of being able to choose between differing term sheets,

“That to me is an incredibly positive sign because it has existed up north for many years,” he said.

As the scene’s roster of seed funds and angel investors grows, ripples can be seen among local accelerators.

Once the beating heart of the Silicon Beach ecosystem, several of these institutions have had to shift their strategies in response to the frothy investment market.

In the early part of the decade, tech accelerators such as Amplify, as well as MuckerLab and Launchpad L.A. in Santa Monica, were established in large part to nurture the local tech economy by providing new companies with seed money, office space, mentorship and networking with VCs and other entrepreneurs. These organizations also sought to shape tech activity around a single, bustling geographic hub that came to be known as Silicon Beach.

The nickname, which many insiders not-so secretly loathe, originally referred to companies along the Santa Monica and Venice corridor, though it’s now more of an all-encompassing moniker that includes rapidly expanding tech business communities in Playa Vista and El Segundo, among others.

Top-tier accelerators quickly became the most prominent example of the local burgeoning tech scene, and they competed with one another to bring in the best talent.

“The guys at Amplify heard we were looking at Mucker,” recalled ChowNow’s Webb about the environment around accelerators back in 2011. “Then Sam Teller at Launchpad heard that and said, ‘Well, if you’re talking to them, we should talk as well.’”

Amplify’s Bricault said the three accelerators would compete for the cream of the crop, but there was still a large playing field to choose from.

“Probably one out of every three (accepted companies) had a competing offer from another accelerator,” he said.

But things are changing. Not all the accelerators’ bets turned into winners and business models had to be adjusted.

Howard Marks, managing director at Santa Monica’s StartEngine since 2011, said the accelerator used to hold twice-annual demo days and fund 20 to 40 companies each year. Now, demo day is a once-a-year affair and StartEngine accepts and invests in half as many companies.

Plus, accelerators are really hard work, said Greg Bettinelli, a partner at Upfront who also co-founded Mucker in 2011. “You’ve got to have a lot of capital and a lot of patience.”

There are also practical concerns such as stocking up on supplies for all the companies operating under your roof, Bettinelli noted.

“It’s a lot more work, a lot less money and everything can go wrong, including the toilet,” noted William Hsu, Mucker co-founder.

Other accelerators have contracted even further.

Launchpad L.A. is not currently investing in any new startups, according to co-founder Teller. In March 2014, he and Launchpad’s leadership team decided to ditch the accelerator model. The firm, along with the companies in its class, moved out of its office space at 1520 Second St. in Santa Monica.

The goal, Teller said, was to focus more heavily on networking events in the mold of Mountain View’s Y Combinator. The team is still figuring out the specifics of how to proceed, but Teller has since joined Tesla Motors Inc. and Space Exploration Technologies Corp. as Elon Musk’s chief of staff.

Launchpad’s last class ended in spring 2014, and its members recounted differing impressions of the way things wrapped up.

Chris Bridges, chief executive of aviation software firm Vessix Inc. in West Hollywood, said he finished Launchpad feeling like he didn’t get introduced to as many Silicon Valley VCs as founders in previous classes.

“I think we sort of got the short end of the stick,” Bridges said. “The main reason we joined an accelerator is to get them to hustle money for you. I just think it could have been better.”

“It was the best decision I made to start this business,” Kaye said of her time at Launchpad.

Teller declined to respond to Bridges’ comments, but he said in an email that the evolving ecosystem prompted him to reconsider Launchpad’s place in the L.A. tech scene.

“The market has changed in the past few years, such that their offerings – money (angels/seed funds), office space, mentorship, speakers, resources – have become increasingly available through other means,” Teller wrote.

MuckerLab has adapted to the shifting winds as well.

Hsu said the L.A. tech economy has benefited from the deal flow created by accelerators, causing entrepreneurs to become savvier. In turn, that’s given seed funds such as his an impetus to open up shop.

Upfront’s Bettinelli agreed that entrepreneurs have become more seasoned, which has had a knock-on effect.

“Now that everyone knows what it takes to get capital … maybe you don’t need to go through an accelerator to do that,” he said.

While MuckerLab’s accelerator, recently ranked as the second best in the nation by the Seed Accelerator Rankings Project, still accepts about 10 startups a year and offers them preseed money, the fund has also invested seed capital in five to 10 other companies, including Santa Monica’s Naritiv, a Snapchat-influencer marketing firm.

The only one of the big three accelerators that’s stayed pretty much the same is Amplify.

While it doesn’t group its companies into classes, Amplify has invested in 43 companies over the past three years, according to Bricault, and it typically has between eight and 11 companies in the accelerator at any given time. Thirty-five of its companies have gone on to raise a total of $150 million in additional seed and Series A funding, while three have been acquired. Only five have ceased operations.

In large part, this influx of seed firms in Los Angeles means the accelerators have done their job and produced high-quality companies that can attract investment at larger valuations.

Baroda’s Lee said that when he started at the firm in 2009, he’d often see tech companies valued between $3 million and $4 million in the preseed stage.

“That same company now is more like $5 million to 6 million,” he said.

Despite all the optimism, those in the local tech finance community say more needs to happen in order for Los Angeles to take even bigger strides.

For instance, Lee said local companies shouldn’t have to always look to the Bay Area for their second or third funding rounds, and beyond.

“What’s lacking is the Series A (firms),” he said, pointing to Upfront, Greycroft and March Capital as the lone representatives in that category locally.

But Bricault said he expects those firms to arrive soon now that seed firms have proliferated.

“You have to put down the fertilizer and soil first and then you start watering and planting,” he said.

But everyone seems to agree that Los Angeles still needs more big money exits to turn more entrepreneurs into investors.

“The best thing for L.A. would be for Snapchat to be a huge success and employ thousands of people,” Bettinelli said. “That product manager at Snapchat could be the founder of the next great company in L.A. They just don’t know it yet.”

And what if Snapchat manages to live up to a valuation that’s creeping closer to the $20 billion mark?

“It could spin off a hundred millionaires,” said Baroda’s Lee.