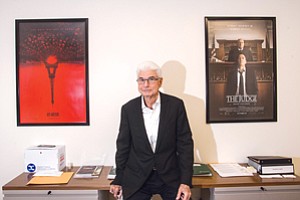 While Hollywood studios and movie theater owners don’t often see eye to eye, they have found common ground on one thing: their desire to save money.

Advances in digital delivery and projection technologies have created an opportunity to streamline and cheapen the process of getting films from studio to screen, leading studios and exhibitors to join forces.

It used to be that studios would ship out 35 mm film prints to thousands of theaters across the country, with the distributor and exhibitor sharing shipping costs.

Over the past decade or so, digital copies of films started being stored on physical hard drives, which still had to be sent via FedEx to each individual theater.

But now, the era of satellite delivery is upon us, whereby studios can beam out their shoot-’em-ups, romantic comedies and everything in between from a single throughput to movie houses near and far.

The product of that effort, Century City’s Digital Cinema Distribution Coalition, now delivers movies, trailers, commercials and live-streaming events via its network to more than 1,300 theaters accounting for more than 16,000 screens across the country.

Formed to take on third-party vendors such as West Hollywood’s Technicolor and Deluxe Entertainment Services Group Inc. of Burbank, which dominated the digital delivery market for the last decade, the coalition has been delivering content for a year.

“We said, ‘What if we fund our own infrastructure and make it a utility?’” said Brian McKay, executive vice president of production operations at Warner Bros. Entertainment who sits on the group’s board.

Rather than letting middleman vendors control pricing, member studios and exhibitors set about creating a unified electronic distribution network that would drive down costs across the board. Once the hurdle of outfitting theaters for digital projection is overcome – at a cost of from $50,000 to $70,000 per auditorium – the savings from digital delivery can be significant.

Although executives remained tight-lipped about how much it costs for satellite delivery, it clearly is a fraction of making and delivering physical copies of films.

Blotky said all new releases from the coalition’s studio customers are delivered through the network, and that it is in talks with New York’s Weinstein Co. and Relativity Media in Beverly Hills, among others, to use the service as well.

On the exhibitor side, mostly large theater complexes are on board, but smaller movie houses are signing up. Southern Theatres and National Amusements Inc. have also joined, along with the Cinema Buying Group, which represents roughly 600 small and medium-size independent exhibitors within the National Association of Theatre Owners, also known as Nato.

“It’s going along very well and fairly rapidly,” said Patrick Corcoran, vice president and chief communications officer at Nato, a trade organization that represents more than 31,000 movie screens in all 50 states. “One thing we’re interested in is getting as many people signed up as possible.”

Although the coalition would not disclose what it charges to deliver a film digitally, it did say the price depends on the length of the movie and number of screens to which it’s being sent. The rates are the same for every client.

Because it costs the same to send the first digital copy of a film as it does the 101st, the greater the scale the coalition is able to reach the less it will need to charge customers to recoup costs.

Those scaling efforts come as domestic box-office numbers are shrinking. As of last week, gross theatrical revenue was down 5.5 percent compared with the same period in 2013, according to entertainment news site Deadline.com.

A lot had to happen before the coalition could become a reality. One of the biggest hurdles was upgrading projectors and screens in theaters so that they could show movies digitally.

In 2010, the three exhibitors who later backed the coalition raised a combined $660 million in debt and equity from JPMorgan Chase & Co. and Blackstone Group to install digital projection systems on 14,000 screens. Today, about 87 percent of the country’s 5,300 theaters, accounting for 94 percent of the roughly 40,000 screens in the United States, are fitted for digital projection.

But the biggest boon to the coalition was its acquisition in March of a satellite network owned by a joint venture of Deluxe and EchoStar Corp. of Englewood, Colo. The purchase price was not disclosed, but once the ink dried, the coalition immediately added nearly 1,000 theaters to its expanding footprint.

Now serving more than 1,300 theaters, the coalition has surpassed the reach of Technicolor, which according to its website reaches about 1,000 theaters.

Technological hurdles aside, it took about three years of talks to get key customers to buy into the coalition’s egalitarian vision, Blotky said.

“It took building trust,” he added in an email, “and that always takes time.”

Another challenge was convincing them that the coalition’s technology was superior to that of its competition – and that it was safe.

“It did take years to get everybody to agree on the technology,” said Tim Warner, chief executive of Cinemark in Plano, Texas. “That’s where Randy and his background was so important.”

Blotky counts negotiating “Charlie’s Angels” star Jaclyn Smith’s branding deal with Kmart as one of the major accomplishments from his time as partner in the West L.A. law firm of Mitchell Silberberg & Knupp.

“I am a lawyer who has devoted many hours to negotiating deals,” he said.

Though the coalition is not a non-profit, Blotky and its investors argue that its goal is to bring down costs, not generate a profit.

Once the coalition hits between 2,200 and 2,500 customers, its operations will have scaled to the point where it can start paying out returns to investors. At that point, existing customers will receive a “rebate” of what would otherwise be the coalition’s post-tax profits. That way, their effective cost of distribution is lowered.

The rates themselves are expected to be lowered as distribution scales as well.

“Year after year the rate will go down until there’s a bottom number,” McKay said, though he would not say what the “bottom number” is.

It’s impossible to put a number on how much the customers on each side save by using the coalition’s network, but as Nato’s Corcoran put it, “Costs are lower with hard drives and even lower with satellite. The more places you have the less expensive it is for delivery.”

Warner said the coalition has transformed the business model for exhibitors.

“Once you sign up to the network, you’ve got one point access to thousands of screens,” he said, eliminating the need for shipping.

As for prints, it appears the era of theater employees hoisting dusty celluloid reels onto 35 mm film projectors is nearly gone. In fact, only a relative few prints are made anymore.

“A typical movie might be 30 prints now,” said McKay.