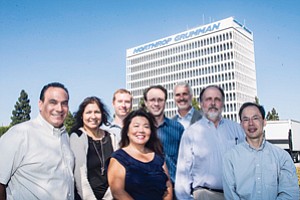 The Defense Advanced Research Projects Agency wants to build an unmanned plane that can fly into space and land back on Earth, and Northrop Grumman Corp. and its partners are trying to figure out how to do it.

If successful, Northrop engineers in Redondo Beach could land a contract that could boost Los Angeles County’s aerospace industry – a sector that’s lost roughly two-thirds of its workforce since 1990.

The company launched its bid in conjunction with Scaled Composites of Mojave and Virgin Galactic in Las Cruces, N.M., part of Richard Branson’s Virgin Group Ltd.

But creating a reusable launch vehicle, which would be called the XS-1, is a Herculean task. Apart from NASA’s space shuttle and an unmanned Soviet look-alike that flew a single mission in 1988, none has succeeded. Recent history is strewn with the husks of failed space-plane projects that died due to technical and financial burdens that proved too much to overcome. That’s why some see the goal of creating a true space plane as the Holy Grail of space flight.

“This is another one in a long line of these programs,” said Marco Caceres, senior analyst and director of space studies at Teal Group Corp. in Fairfax, Va., which monitors the aerospace and defense industry. “Don’t get too excited.”

In addition to the effort by the defense agency, commonly called Darpa, five aerospace companies are developing orbital or suborbital launch vehicles that are partly or mostly reusable. Two of those, including Elon Musk’s Space Exploration Technologies, known as SpaceX, in Hawthorne, are in Southern California.

The end of the Cold War hit the local aerospace industry hard as defense spending plummeted. Since 1990, the county has lost more than 130,000 aerospace jobs. While the pace of job losses slowed a bit after Sept. 11, the industry has yet to rebound.

Despite some high-profile achievements, including notable advances made by SpaceX regarding its partly reusable Falcon 9 rocket, the industry is still shedding workers. Between 2012 and 2013, aerospace and defense-related industries lost 372 jobs in the county, dropping the overall tally to 56,239, according to figures from the California Employment Development Department.

Even now, the team at Northrop’s Redondo Beach facility, under the direction of Chief Engineer Jeff Lane, has fewer than a dozen members working on the project.

Northrop hopes to change this. As part of its Darpa submission, the company will be required to formulate a business plan for bringing the space planes to the commercial market, because additional federal funding would be highly unlikely.

“They’re providing that upfront assistance,” Martin McLaughlin, Northrop’s Fort Worth, Texas-based manager of programs and space exploration systems, said of the Darpa contract. “We have to invest to bring it into operation. Our anticipation is that it would be a private endeavor and we hope to do that with appropriate partners.”

McLaughlin declined to disclose how much that investment might cost, but aerospace analyst Caceres said it would be a hefty sum.

“You’re talking about hundreds of millions of dollars to develop any kind of vehicle,” he explained, adding that the process could take up to a decade.

But if Northrop’s designs are successfully tested and subsequently turned into its desired small fleet of vehicles, a piece of the local aerospace economy could be relaunched.

If the space planes are built, McLaughlin said Northrop and Virgin Galactic would operate them in the same way that airlines operate airplanes: selling seats and cargo space to commercial and military customers that otherwise would have to launch satellites.

“Greater Los Angeles will be reinvigorated as a major cluster of spacecraft development and operations,” McLaughlin said in an email.

Caceres agreed, saying the implications could reach beyond aerospace and give a boost to companies that service manufacturers such as Northrop and its employees.

“If you want to build a fleet, you’re basically talking about a whole new industry, potentially thousands of jobs,” Caceres said. “The spinoff effects of that are incalculable.”

While a partial revival of the local aerospace industry could be a consequence of the development of reusable private space vehicles, the primary goal is to cut down on high launch costs.

The project also corresponds with the Defense Department’s philosophy of disaggregation in regards to space infrastructure. Rather than relying on one or two large satellites, the Air Force would begin to launch a greater number of smaller satellites in order to reduce its vulnerability to attack from potential adversaries such as China, which has started developing anti-satellite weapons.

“The DoD wants to develop launch solutions that are cheap and able to deploy payloads very quickly,” said Jake Silverman, a senior analyst at Avascent Group in Washington, D.C. “Being able to rapidly launch a large number of smaller satellites is advantageous under a strategy of disaggregation.”

In addition to its financial requirements, Darpa has set some notable technical goals for its bidders.

The department expects the XS-1 to fly 10 times in 10 days in addition to breaking Mach 10, 10 times the speed of sound, at least once while launching a payload into orbit. By comparison, Virgin Galactic’s Space ShipTwo, designed for space tourism and built by Scaled Composites, has a maximum speed of Mach 3.5, or roughly 2,600 mph.

But Caceres said the real hurdle is building a craft that can be reused daily for 10 days.

“That is so ambitious it’s almost ridiculous,” he said.

McLaughlin responded by saying the goal of reusability is pragmatic, noting that the company has made huge technological strides in developing unmanned, autonomous aircraft that can take off and land from aircraft carriers.

However, he did acknowledge that completing that many consecutive flights in a row is suitably “Darpa hard,” referencing what he described as the department’s notoriously difficult specifications.

But if it happens, it would likely be a game-changer.

“The thing that would excite the industry is volume of flights,” said Caceres. “It’s that regularity that has been missing from our industry forever.”

Northrop will still have to beat out two other teams in order to progress to Phase Two next year, including Chicago’s Boeing Co. and Mojave’s Masten Space Systems, which were also awarded Phase One contracts. Once each teams’ initial designs are complete, Darpa plans to evaluate the technical feasibility and methods of each group and narrow the field to one.

McLaughlin, the man in charge of the XS-1 project for Northrop, said technology has finally caught up to the aerospace industry’s ambition of building this type of vehicle – a goal that dates back to the 1950s. While previous efforts, such as President Ronald Reagan’s vaunted National Aero-Space Plane, Lockheed Martin’s X-33 and McDonnell Douglas’ DC-X have attempted a single-stage-to-orbit model, meaning the vehicle doesn’t shed any boosters during flight, the Northrop team is designing a two-stage rocket with a reusable first stage that lands safely back on Earth.

“They were trying to do too much,” said McLaughlin. “I would say we’re certainly being more pragmatic. At this point we have the technology to go ahead and do it.”