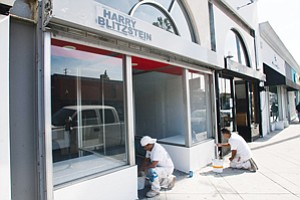 The more you talk to folks at YouTube multichannel networks these days, the less likely you are to hear them utter the name of the Google Inc.-owned online video platform that put them on the map.

That’s because they’re broadening their business models to include revenue streams more aligned with the multipronged strategies of the Hollywood studios that have paid millions of dollars to acquire them.

Upstart network AwesomenessTV, an independently operated subsidiary of Glendale’s DreamWorks Animation, will dip into mainstream merchandising waters next month with a pop-up retail store to market branded items. Also, last week it announced an imprint that will publish books based on series appearing on the network.

“I was intrigued and continue to be intrigued every day about this intersection of retail, fashion, tech and content,” said Jim Fielding, global head of consumer products and retail for Awesomeness. “I feel we’re right at the vortex of that intersection, specifically for our demographic at AwesomenessTV.”

Fielding joined Awesomeness in May after serving as chief executive of retailer Claire’s Stores Inc. and, before that, as president of Disney Stores Worldwide. He said the Fairfax District store will be a pilot project that will allow him and his team to analyze what types of products and in-person events resonate most with fans. They’ll be able to judge that not only by sales figures but also through social media posts.

Called Scene@AwesomenessTV, the shop will open in mid-November at 428 N. Fairfax Ave., across the street from Canter’s Deli. It will remain open for about six weeks and play host to a series of as yet unannounced live events featuring a number of AwesomenessTV stars who are also expected to film videos and shows at the location.

“It’s brand awareness,” Fielding said. “It’s a way to bring our creators to their fans and their community.”

In another effort to make that connection, the teen-oriented content producer launched a junior fashion line available at Kohl’s Corp. department stores last month. And its publishing effort, Awesomeness Ink, will put out two young adult novels, “Runaways” and “Side Effects,” that are based on AwesomenessTV YouTube series that have garnered millions of views.

Awesomeness’ effort reflects a wider trend of multichannel networks, called MCNs in the industry, and individual content creators moving their brands beyond the confines of YouTube.

A number of YouTube stars have signed book deals over the past year. And last month, Culver City’s Fullscreen staged a daylong festival at the Pasadena Convention Center where its talent performed songs and played games on stage.

“Merchandising, public performances and appearances are all part of the business models of online video creators,” said Tubefilter.com founder and editor Drew Baldwin, whose website covers the online video industry.

Beyond YouTube, Awesomeness also produced and distributed the feature film “Mindless Behavior: All Around the World” as well as the TV movie “Terry the Tomboy,” which aired on Nickelodeon.

Seeking new revenue sources from content creators who, in some cases, have millions of followers was perhaps to be expected after the gold rush that has seen mainstream media companies snap up local MCNs.

DreamWorks paid $33 million in cash for Awesomeness in May 2013, though that number could rise to $117 million based on performance targets.

In the aftermath of these takeovers, it’s expected that more off-YouTube initiatives will be launched.

“We have a lot of different programs we’re working on for 2015,” said Fielding.

With a roster of roughly 88,000 YouTube partners, Awesomeness’ combined channels average approximately 1 billion views per month, according to information provided by the company.

Fielding said the neighborhood around the shop, located a couple of blocks south of Fairfax High School, generates a lot of foot traffic among teens and young people.

“It’s hip,” Fielding said of the Fairfax District. “We loved having a street location.”

Awesomeness signed a short-term lease on the property and the tentative plan is to open the store Wednesdays through Sundays, though it might be open more frequently in the run-up to Christmas. The company declined to disclose how much it’s paying in rent at the 1,000-square-foot space, though monthly retail rents in the area average around $3.75 a square foot a month.

Fans will be able to buy a variety of merchandise including T-shirts, shoes, accessories, jewelry and holiday-themed items. In addition to its own branded items, Scene@AwesomenessTV will sell other products popular among teens, such as shoes from Playa del Rey’s Toms.

Fielding said Awesomeness has helped several of its stars set up licensing deals with clothing manufacturers whose apparel will be on sale, though it does not preclude them from taking outside representation to find deals for them. The video creators will receive a cut from the sale of each that features their likeness or brand.

One star whose T-shirt and stationary line will be offered at the store is Hunter March, host of a pop culture roundup show called “Daily Report” and irreverent advice series “#DearHunter.” March signed with Big Frame’s management team a few months ago, but Awesomeness brings him deals, too.

All of the merchandise at the Awesomeness store will also be sold in an online store that’s set to launch at the same time as the physical space.

Fielding and company are still figuring out much of the programming that will take place in store, but he made clear it will be plentiful.

“Every day we’re open something will go on,” Fielding said.