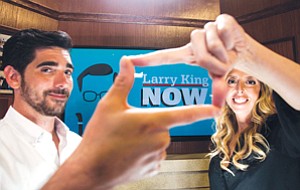 After Larry King retired from CNN a few years ago, he moved his show to an unlikely destination: Ora TV, an upstart Internet network launched two years ago with backing from the world’s richest man, Carlos Slim Helú.

Now, Ora is expanding far beyond the realm of news talk. The company’s Glendale production studio is also churning out celebrity and infotainment programming as it tries to become a larger player in the online entertainment world.

In doing so, the ad-supported network is banking on celebrities such as William Shatner, Haylie Duff and Jesse Ventura to help the network stand out in an online entertainment landscape often dominated by YouTube’s Internet-native sensations.

“One of the toughest jobs in all of media right now is how do you get awareness for your shows in an incredibly cluttered and difficult landscape?” asked Chief Executive Jon Housman, who works from Ora’s New York office. “In our case it starts with the shows themselves. We try to create shows that are different from what you see in the short-form video space, that involve talents and hosts.”

The company is both a producer and distributor of content. Money comes from selling advertising as well as licensing shows to outlets such as Hulu or foreign TV networks.

The L.A. studio is run by Allison Glader and Jason Rovou, who both worked with King at CNN. The company produces “Larry King Now,” an informal talk show, and “Politicking,” which focuses on politics. Other programming on the network includes “Beer Geeks,” which follows a brewer as he travels the country, as well as the celebrity programs that were added this year.

Executives said they expect Ora’s revenue to double this year compared with last, though they would not be specific about financial metrics.

Still, Ora needs to be careful not to rely too heavily on celebrities to build viewership, said Steven Oh, chief operating officer at L.A. digital media firm Young Turks. In the online world, star power often means having a connection with the viewer rather than just being famous.

“In the digital world, it really doesn’t matter whether it’s William Shatner,” he said. “The audience has to feel that the host, whether that is William Shatner or an unknown person, is connecting with them.”

Ora was launched in 2012 after a discussion among King; his wife, Shawn; and Slim over a meal at King’s house in Beverly Hills.

King was at the time contemplating whether to stay retired after leaving his nightly CNN show, “Larry King Live,” in 2010, after 25 years on the air. King said he was already having thoughts of returning to broadcasting when Slim encouraged him to make a comeback. King credits his wife for the idea of launching an Internet network.

Slim funded the launch through the Mexico City telecom giant he controls, América Móvil, and King was given a 20 percent stake. “Ora” is both Shawn King’s middle name and a reference to the Spanish and Italian words for “now.”

Glader said working with a smaller budget and fewer people than she was used to at CNN was a challenge, as was finding ways to appeal to Internet viewers, who are younger than CNN’s middle-age demographic.

“This is a big transition, from network to Internet,” Glader said. “It’s a different audience with a shorter attention span. You can’t just do what you do on TV for the Internet.”

One way she’s done that is by booking young guests such as rappers, DJs and TV stars. On “Larry King Now,” King also takes questions from social media and does other bits with the goal of getting clips to go viral.

There are other differences, too. King’s show was live on CNN, but his Ora shows are taped, edited and then released online. King said he would like to do live shows, but the company is still developing the infrastructure to make that happen.

Still, he said he’s happy with his new network, especially given the lack of corporate bureaucracy.

“The best thing about it is I don’t have any suits,” King said. “I feel nice having a position where any show I want to do, we do.”

Ora took a big step toward expanding its content last year with its acquisition of Stick Figure Studios of New York, a documentary and reality TV production house that has produced projects for HBO, National Geographic and others.

Ora has about 45 full-time employees but scales up as needed with freelancers for certain projects.

The company develops much of its content in-house, but is also finding shows through other means. For example, Ora recently picked up a Spanish-language show that was previously on TV Azteca, and last month began posting videos on its site from West Hollywood’s Laugh Factory, which is developing new show ideas with Ora.

This year, Ora introduced Ventura’s “Off the Grid,” Shatner’s “Brown Bag Wine Tasting” and Duff’s “Real Girls Kitchen.” The stars are often paid an upfront sum and given a piece of the backend as well.

All the while, Ora is trying to build up the popularity of its website while also disseminating its videos as widely as possible, for example, by maintaining YouTube channels. A big part of promoting the shows is harnessing the network’s and its stars’ social media followings.

The company claims to have about 1.5 million Web viewers on its site every month. That pales in comparison with the number of viewers that CNN gets in the same time frame. But Rovou said the company isn’t going for as wide an audience as possible. Rather, its target is the younger set of viewers coveted by advertisers.

Housman said the company is working to expand its advertising business by introducing more brand integrations. For example, a brand could pay to have its logo on King’s coffee mug, although it’s not clear whether King would go for that idea.

Although King, 80, said he will have to be carried out before he retires, it’s fairly clear that the network is planning for his eventual retirement with its slate of new shows.

And the company has no plans to slow down. Rovou also said the company will likely begin looking for a larger studio space soon, which would likely be situated closer to King’s residence.

He would like to see the company’s output double in the near future.

“What we have is a good start and we have good idea of who we are and what we want to be,” he said. “I would love to see us double our output.”