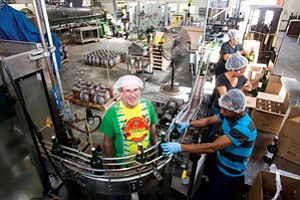 Pouring It On: Reed’s Chief Executive Chris Reed at the drink maker’s factory in the unincorporated area of Rosewood. Photo by Ringo Chiu.

Ginger ale and soda maker Reed’s Inc. is ready to chugalug. The company, on track for its first profitable year, is buying equipment, rolling out its first national advertising campaign and, thanks to sudden interest from lenders, refinancing high-interest debt.

Chris Reed, the company’s namesake and chief executive, is the kind of guy who wears tie-dye shirts to work, but he’s also a businessman who gets excited relating how, for the first time, banks are competing to do business with his company.

“I was aggressively pursued,” he said. “I had a sense of what it’s like to be a hot chick for a while.”

If not Reed himself, the company’s sales have been hot enough lately for the company to commit to spending more than $1 million on new machinery that will speed up production at its L.A. bottling plant. Reed said the new gear will triple the plant’s output and let him take on orders he’s had to turn down.

“We’ve maxed out,” he said. “We’re actually turning away too much business right now.”

The company is also close to wrapping up a financing deal that will save nearly $1,000 per day in debt service costs, and new ads for Reed’s ginger ales, root beer and other products are now airing on cable networks including BBC America and Food Network.

It’s quite a shift for Reed’s, which is on track for its first profitable year. Still, investors seem cautious about the company.

Reed’s shares fell 29 percent, to $5.65 a share, in a single day in late March thanks to an annual report that included a big yearly loss. At the time, Reed, who with his wife, Judy, owns 37 percent of the company, said the stock would eventually “get religion.”

Shares have since bounced up a bit, closing Oct. 1 at $5.84 a share, but they have yet to return to their peak of more than $8 before the March sell-off.

Reed’s reported net income of $418,000 for the first half of this year, compared with a loss of $897,000 in the same period last year. And that swing to profitability has made it possible for the company to get new and better loan terms than it had from its current lender.

Reed’s owes about $4.5 million to PMC Financial Services Group, an Anaheim lender that works with struggling or high-growth companies. But now Reed said the company has just about wrapped up a refinancing with a major bank.

He said he could not name the lender until a deal is finalized, but did say the new credit line will have a substantially lower interest rate than the roughly 7 percent it’s paying to PMC now.

Reed said the new loan will save the company more than $350,000 annually and provide $2.5 million financing for additional equipment.

That’s on top of the $750,000 Reed’s has already spent this year on new equipment, and $750,000 more it plans to spend, for its bottling plant, located in the unincorporated area of Rosewood, near where the 105 and 110 freeways intersect.

The plant, operating at full capacity, sounds like a celebration thanks to the constant clinking of glass bottles moving along the assembly line.

Once they’re installed over the next few months, new machines will speed up production by automatically performing some tasks that are still done by hand, such as loading individual bottles from pallets to the assembly line.

Reed’s is investing in its production capacity as its sales have soared. The company’s revenue of $42.2 million last year was up 28 percent over 2012’s, and sales have continued to climb this year.

That’s in contrast to what’s happening to other soda makers. Trade newsletter Beverage Digest of Bedford Hills, N.Y., reported last year’s sales of soft drinks fell 3 percent compared with 2012, the ninth year in a row of a decline.

Jonas Feliciano, an analyst in the Chicago office of London market research firm Euromonitor International, said Reed’s and other companies that advertise products with natural ingredients – such as the ginger that goes into Reed’s flagship product – have fared better than bigger beverage companies.

“This can be an area that’s growing counter to the traditional Coke and Pepsi products, but it’s extremely niche,” Feliciano said. “Look at coconut water. That’s taking off.”

That’s the idea that Reed’s is trying to communicate in its new TV ad for its ginger ale, which features close-up shots of ginger root, lemons, limes and honey.

If you haven’t seen an ad on TV yet, wait until next year: Reed said he plans to quadruple ad spending to $2 million.

Reed’s has also boosted its sales by expanding beyond sugar-sweetened soda.

Although Reed said the company’s sales of its full-calorie soda options are “cruising,” his company has also tried to account for consumers’ newfound aversions to calories by also using stevia to sweeten zero-calorie drinks.

Meanwhile, the company’s biggest sales boost has come from kombucha, a fermented tea beverage it introduced in 2012. Kombucha sales were up 74 percent through the first half of this year compared with the same period last year.

Meanwhile, the company continues to look for new distribution channels.

Reed’s drinks can be found at venues like Trader Joe’s or Whole Foods. As the company expands, Reed said he wants a greater presence at both mainstream grocers and hot spots around town.

“We’re starting to go to the delis,” he said. “Think of all the trendy places in L.A.”