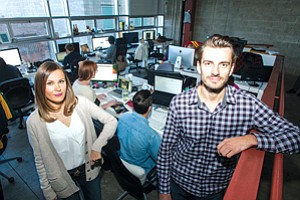 In the Internet age, “influence” is an increasingly desirable trait for brands looking to sell their products.

And influencers, those with significant followings on such social media platforms as YouTube, Twitter, Instagram, Vine and even Snapchat, are increasingly using their base to command thousands in endorsement dollars.

While some in the business community have expressed doubts about whether Internet stars and social media personalities are worth the investment, a cottage industry of firms in Los Angeles has sprung up to connect these increasingly business-savvy individuals with digital-friendly brands.

“We definitely have more of those influencer firms because we have more influencers, YouTubers, celebrities, Viners, etc., living in L.A. than other cities,” said Kevin Winston, founder and chief executive of tech networking group Digital LA.

And some of the companies using these services are deciding to come back and spend more the second and third time around.

“Over 70 percent of our customers recur on their campaigns,” said David Kierzkowski, co-founder and chief executive of Santa Monica’s FameBit Inc., a YouTube marketing platform where brands can solicit popular YouTube creators to make videos promoting their products.

Many of those customers start out with moderate campaign budgets in the $1,000 to $2,000 range. But, said Kierzkowski, “most brands at least double their spending while others increase it into the six-figure range once they measure the performance.”

More than 500 brands have already used FameBit’s service, which launched just 11 months ago. FameBit takes a 20 percent cut of each deal and projects its annual revenue will reach $10 million, said co-founder and Chief Operating Officer Agnes Kozera, twice what it was projecting in September.

“We have a lot of momentum” Kozera said. “We’re growing.”

Its service is designed to expand the pool of influencers making money based on the size and characteristics of their audience. The company targets YouTubers who might not match the huge subscriber numbers of A-list talent but maintain loyal followers in niche markets.

FameBit participated in the eighth class of Mountain View accelerator 500 Startups earlier this year and raised a $1.4 million seed round in June. Investors included 500 Startups as well as Science Inc.; DeNA; and Allen DeBevoise, founder of Machinima Inc. The company operates out of Science’s Santa Monica headquarters.

Culver City’s theAmplify, also less than a year old, helps brands connect with Instagram influencers with at least 50,000 followers and assists them in creating photo-based campaigns.

Rezvani’s company works with more than 350 influencers who have a combined 100 million followers. It has crafted Instagram campaigns for media companies such as 20th Century Fox Film Corp., Paramount Pictures Corp. and Hulu, among others.

West Hollywood’s Influential Network, a company that said it has connected more than 20 different brands with about 400 influencers across multiple social media networks, has also seen growth.

“I think it’s at least double,” Detert said of the increase, “but I’ve seen even higher than that.”

The amount an influencer makes depends on their audience and the size of the campaign. An average deal on FameBit is $400, which means a creator would pocket $320 for producing a given number of videos after the firm takes its 20 percent fee. But theAmplify and Influential Network typically mount larger campaigns with popular influencers who can earn thousands of dollars per deal.

Despite that anecdotal success, influencer marketing is not without its critics.

He cited, among other things, a lack of hard proof that influencer marketing efforts create the types of Internet “waves” that brands desire.

“Unless someone, somewhere, can produce evidence that these ‘special’ people can further our marketing campaigns more efficiently than other approaches, we shouldn’t waste money chasing them,” Satell wrote.

But the firms counter that the goal is not so much to create a wave that “breaks the Internet,” but rather to create meaningful ripples among the right types of consumers.

And they do that with data.

Each of the L.A. firms presents their brand clients with demographic information about each influencer’s audience, including age ranges, geographic location and general interests, so the brands can decide for themselves which ones to hire.

TheAmplify even uses proprietary technology to analyze user comments on Instagram posts to gauge sentiment and conducts focus groups to better understand how Instagram users respond to their campaigns.

“If people are commenting and saying, ‘Where can I buy this?’ That’s a real impact. That’s valuable,” Rezvani said.

Many of FameBit’s YouTube creators also include coupon codes in their brand-sponsored videos for viewers to use during online checkout if they decide to buy a product. That way, brands more concerned with instant sales performance versus broader brand awareness can track which influencers are driving revenue.

In his report, Satell pointed to the work of Microsoft Corp. principal researcher Duncan Watts as further evidence that influence marketing does not hold up to empirical scrutiny, highlighting his characterization of influencer marketing as a “misleading model.”

While Watts, who could not be reached for comment, and his research colleagues are undoubtedly skeptical about large-scale marketing efforts that rely on small numbers of influencers, some of his studies seem to offer room for the data-driven approach employed by the L.A. firms.

Watts co-authored a paper in 2012 that concluded that while “social epidemics” are an unrealistic goal when it comes to influencer-driven viral campaigns, “marketers and others interested in efficiently diffusing information should work to harness and enhance the potentially valuable gains from each seed, where even incremental improvements in pass-along rates can lead to substantial returns on investment.”