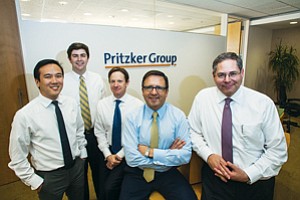 Anthony Pritzker, the L.A. head of the storied Chicago Hyatt hotel family, is making a bigger bet on his adopted home.

Pritzker Group Private Capital, a private equity shop he runs with his brother J.B. Pritzker, is moving three professionals to its West L.A. outpost from its larger Chicago office, a move that could signal an increase in local investments by the firm.

While Pritzker Group has operated an L.A. office for some time, senior management, except for Anthony Pritzker, has been based in Chicago. Moving a partner, vice president and associate to Los Angeles represents a meaningful pivot for the firm. The company’s website lists 17 employees between Chicago and Los Angeles, but doesn’t say where each is based.

In an interview at the Business Journal’s office, Anthony Pritzker repeatedly said he wants Pritzker Group to have more people in Los Angeles, interacting with the owners of businesses that could become portfolio companies.

Pritzker also said Los Angeles is home to many middle-market, family-owned businesses that might feel more comfortable working with Pritzker Group, also a family business, than other private equity firms.

“There are a lot of these post-World War II family businesses that are now going through a generational transfer period,” he said. “The grandkids may not want to be in the company, but the family doesn’t want to sell to just anybody. Joe’s been working the lathe for 20 years, and they care what happens to him. We can relate to them.”

In fact, Pritzker said he called his firm’s private equity arm “private capital” to avoid associating it with other firms in that industry who buy companies only to flip them a few years later. Pritzker Group’s intent is to invest in businesses for the long term.

While a lot of money has poured into Los Angeles chasing tech companies – and Pritzker Group plays in that space, too, with its Pritzker Group Venture Capital entity – Pritzker Group Private Capital’s sweet spot is investing in manufacturing and business services companies that aren’t sexy but are profitable.

In December, Pritzker Group bought Milestone AV Technologies, an Eden Prairie, Minn., manufacturer of audiovisual mounts and screens. Pritzker said his family had long been friendly with the family owners of Milestone, making his firm a natural partner when they wanted to cash out. Then in May, Pritzker Group acquired Technimark, an Asheboro, N.C., company that makes plastic packaging for consumer products.

Pritzker hopes having more boots on the ground in Los Angeles will help him find more companies like those two to invest in.

“It’s important to be in the flow of what’s going on,” he said.

West Monroe Chief Executive Kevin McCarty said he wants to take that office from its current seven employees to 100 within the next two years.

“We have large expansion plans,” he said. “Our strategy is to get L.A. to critical mass.”