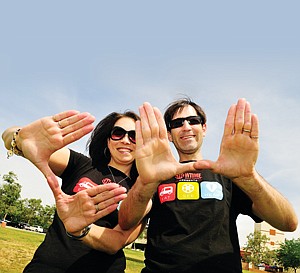 Picture This: Sharon and Jeff Sperber at Autry National Center in Griffith Park, where they show movies at night. Photo by Thomas Wasper

John Wyatt didn’t know it at the time, but a dozen years ago when he projected an Alfred Hitchcock flick on a mausoleum wall for a few hundred film buffs, it was the start of a full-on outdoor movie craze in Los Angeles.

Since that night at Hollywood Forever Cemetery, outdoor movie screenings have grown into some of the biggest shows in town. The events draw thousands of people to lawns across Los Angeles every summer weekend. Some of the alfresco picture shows have morphed into bigger events, featuring bands, DJs, photo booths and food trucks.

The season was scheduled to kick off May 10 with Saturday night screenings staged by Wyatt’s Cinespia at Hollywood Forever, as well as by Eat See Hear at Santa Monica High School and Street Food Cinema at Pan-Pacific Park in L.A.’s Fairfax District.

There are others. All told, more than 100 such outdoor movie nights are planned this summer in Los Angeles, with outdoor movies also to be screened for free at downtown L.A.’s Pershing Square, Santa Monica’s Third Street Promenade and Alfredo’s on the Beach in Long Beach. Even Dodger Stadium will host three after-game screenings.

Most are aimed at young adults, but some outdoor flicks are family oriented, showing Disney movies or other animated features.

Many of the events turn a profit thanks to high turnout and sponsors. Outdoor movies have become so popular that a rivalry has emerged among competing series that this year scheduled the same movie on the same night, just miles apart.

One surprising aspect to this business: It takes a lot of work.

“There’s a perception that it looks so simple, but it’s not,” said Heather Hope-Allison, chief executive at event production firm TIL Lifestyle Marketing + Events of Eagle Rock and a producer of the Street Food Cinema series. “It looks like you pop up a screen and let everyone eat, but there’s a lot that technically goes into it.”

That work often starts with getting permits to use land from schools, museums or government buildings, and then working with movie studios to license films. There’s also the task of preparing technical components such as giant screens and audio that can reach thousands of people in an outdoor setting. Advertising, crowd control, hiring event staff and getting toilets can also factor into the equation. Each event for the most part costs in the five figures to produce. Organizers say they’re profitable.

The screenings have prospered by tapping into a few things particular to Los Angeles, such as dry weather, a desire to celebrate the local movie industry and a rare chance to gather in public spaces.

Many of the events have become hip hangouts for young adults.

Patrons usually spread out on a blanket and have a picnic with food, drinks or maybe a board game to kill time before the movie starts. Some events look more like a lawn party than a movie screening. And unlike indoor theaters, there is often chatter during showings and sometimes people will cheer during their favorite lines.

It’s a growing phenomenon. The companies interviewed for this article said attendance has increased and some say they’re signing new corporate sponsors.

“Every year it becomes more and more popular,” Wyatt said of the Hollywood Forever screenings.

Films this year will include “Jaws,” “Pulp Fiction” and “National Lampoon’s Vacation.” There are also signs that movie studios are loosening up on their resistance to licensing more of their movies.

Wyatt started Cinespia as an esoteric Italian film club for less than 100 friends and acquaintances. But then he attended a tribute to Italian actor Rudolph Valentino at the cemetery in 2001, which included images projected on the outside wall of the mausoleum. That gave him the idea to produce events at the site. He worked out a deal with the cemetery’s operator, exchanging a share of proceeds to help with upkeep.

The first Cinespia event at the cemetery the following year was low tech by today’s standards. Wyatt projected a 35 millimeter film from the back of a truck on the mausoleum wall.

The first couple of events didn’t make money, but Wyatt knew he was on to something.

“When the movie ended and people started cheering, it was exciting,” he said. “I knew it could be popular.”

Cinespia now has about five full-time employees and its cemetery screenings have reached peak capacity. Each screening last year brought in as many as 4,000 guests, he said, but that was too crowded. So this year Cinespia will limit attendance to 3,500 to allow people to sit on the lawn and get a view of the screen. Tickets sell for $14. Those sales sustain the series, since Cinespia does not sell “presented by” sponsorships as Eat See Hear and Street Food Cinema do.

The popularity of the cemetery events – and the increasing availability of digital projectors – also opened up the opportunity for others to enter the market.

J.J. Snyder, president of Hollywood Outdoor Movies in Oceanside, produced outdoor movie screenings in San Diego over the years. In 2010, Snyder linked up with Hope-Allison and her marketing firm to produce outdoor movie series Outdoor Cinema Food Fest. In 2012, Hope-Allison’s company broke off from Snyder. She and her husband, Steve Allison, launched a series, Street Food Cinema, on their own.

Snyder then teamed up with Jeff and Sharon Sperber, who run Sherman Oaks firm Trailhead Marketing. Hollywood Outdoor and the Sperbers partnered to launch the Eat See Hear series in 2012. The Sperbers said they’re not making a lot of money, but they use the event as a calling card for their marketing business to show potential clients they can build relationships to get permits and sponsorships.

Both companies travel to multiple locations around Los Angeles, where they offer food trucks and live bands before screenings. Both series make money from a combination of ticket sales and corporate sponsorships.

Both series have also scheduled to show musical comedy “Pitch Perfect” on the same day, June 28. Eat See Hear has planned the showing at Paul Revere Middle School in Brentwood, while Street Food Cinema plans to show the movie at Poinsettia Park in West Hollywood.

“It’s just a challenge to constantly redirect so we’re not doing anything too similar,” Hope-Allison said.

Still, thanks to a huge, spread-out population of moviegoers in Los Angeles, the series have continued on a growth track.

Demand was high enough at Street Food Cinema last year that ticket prices were raised from $10 to $12 for general admission this year. Hope-Allison said the series doubled its total attendance from about 25,000 in 2012 to 50,000 last year.

Eat See Hear also grew attendance to 1,500 to 2,000 people per event last year, up from about 1,000 the first year, Sharon Sperber said. This year, the couple reserved new venues that can accommodate even more people, such as the Autry. Eat See Hear tickets purchased in advance go for $10, or $12 at the door. Both Street Food Cinema and Eat See Hear occasionally host free movies when sponsors have stepped in to foot the bill.

“We grew in terms of everything we did last year,” Jeff Sperber said. “We’ve got an incredible, vibrant scene in L.A.”