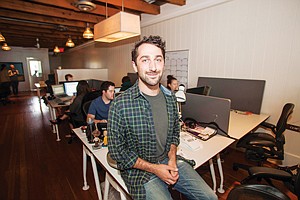 When you think of tech startup accelerators in Los Angeles, it’s hard not to picture enthusiastic young entrepreneurs huddled over laptops in communal office space steps away from the Pacific Ocean.

But Santa Monica’s Launchpad LA, which has touted an offer of “free office space in the heart of Santa Monica (one block from the beach) for four months” on its website, might soon be shattering that image.

“We most likely won’t bring our startups together to co-locate for the next batch,” said Sam Teller, co-founder and managing director of the accelerator and seed fund. Instead, startups would have to find their own office space.

Teller said he expected to make a final decision about office space in the coming weeks, but a switch is likely.

By moving away from a model that has helped Launchpad incubate 46 companies – 41 of which are still active – that collectively have raised more than $90 million, Teller is bringing an end to a model that tech site PandoDaily last year called the best accelerator in Southern California. It has also been among the top five in rankings by Forbes.

So why mess with a good thing?

“Like any business,” Teller explained, “we’re always re-evaluating and talking to our customers. This is entirely us saying, ‘Here is our budget. How can we best spend this money?’ ”

It would not be the first pivot in the accelerator’s five-year history.

Launchpad made its debut in 2009 as a Silicon Beach mentorship organization for startups. It didn’t offer funding at first. Three years later, it evolved into its present structure, offering cash and shared office space for four months that tech entrepreneurs use as a home base in the formative stages of their company. In exchange, Launchpad gets an equity stake. The communal space gives budding companies access to the accelerator’s mentors, staff and other entrepreneurs. Though the value of physical space depends on the startup in question, the goal is to get creative juices flowing in a supportive, communal environment.

Launchpad is backed by $1.3 million, made up of investments from Upfront Ventures, Rincon Ventures, Idealab and Baroda Ventures, among others. Besides offering office space and mentorship, Launchpad has made seed investments of about $50,000 in tech startups in exchange for a 6 percent stake in each business.

Although the office space might go away, the rest of the arrangement will not change. However, Teller said the fund will make slightly more seed investments going forward in companies not involved with the accelerator.

Teller, who worked as a new-media and online advertising manager for President Barack Obama’s first presidential campaign, joined Launchpad in 2011 after leaving Charlie, an L.A. media firm and interactive agency he co-founded.

Three years in, he said that he found from talking to entrepreneurs who had gone through the accelerator that office space was simply not a compelling perk. The value of the enterprise, they told him, was the mentoring, networking and guest speakers it offered.

“Around five or six on that list would be the office space,” Teller said, noting that roughly one-quarter of startups going through Launchpad already have their own offices.

One of those was Big Frame, a YouTube multichannel network acquired by AwesomenessTV in April for $15 million. Big Frame rented office space on Sunset Boulevard in West Hollywood during its time at Launchpad, and Sarah Penna, its co-founder and chief creative officer, said that arrangement worked just fine.

“The value for us came in the events,” Penna explained, noting a term sheet workshop as particularly useful, as well as talks from company founders whose businesses had been acquired.

Another factor has been that the number of shared-office locations catering to tech startups in Santa Monica has increased in the last few years, giving startups more options than they had when Launchpad launched.

The change would free up part of Launchpad’s second-floor headquarters at 1520 Second St. in Santa Monica for another tenant, perhaps even first-floor neighbors General Assembly, a global education network that offers classes, events and workshops relating to tech and business.

“General Assembly would be a natural fit to move into our office space,” Teller wrote in an email, “but nothing has happened to date.”

General Assembly did not return a request for comment.

Teller declined to say what Launchpad pays in rent, but based on rental rates in the area and the amount of space it takes, the annual bill could be in the $250,000-$300,000 range. By moving out of some of that space, the accelerator could free up cash for expanded programming.

That would be in the vein of the country’s top accelerator, Mountain View’s Y Combinator. It places a heavy emphasis on weekly events featuring guest speakers from across the tech spectrum. Y Combinator does expect startups to relocate to Silicon Valley during the three-month program, though it does not offer office space itself.

The 9-year-old Silicon Valley accelerator, whose 630 graduate companies include Dropbox, Airbnb and Reddit, also runs a one-day Startup School, where founders of companies it funded and other guests discuss their stories with budding entrepreneurs.

“We’ll certainly pull lessons from Y Combinator,” Teller said. “It makes sense to always stay fresh and make sure you’re not doing things just because that’s the way you’ve been doing them.”

Launchpad has not paid any speakers to date, though Teller said he could imagine a scenario in which it would in order to attract a greater number from outside Los Angeles. Launchpad’s events budget is covered by the Launchpad LA fund and sponsorship revenue. Most events are designed only for companies in the accelerator, though some, like the Angel Investor Bootcamp held in September, are open to the wider community.

“It’s important for Sam to focus on what L.A. is missing now,” Lilling, who is no longer involved with the accelerator, wrote in an email. “A shared office environment requires extensive resources, and Sam sees a lot more value investing those resources in great people and great companies, rather than in infrastructure.”

Which is not to say the shared office-space accelerator is on the way out. Indeed, some leading local accelerators, including MuckerLab in Santa Monica, Amplify LA in Venice and Idealab in Pasadena, continue to provide office space to startups.

MuckerLab co-founder and Managing Partner Erik Rannala said he and his partners firmly believe that sharing office space is beneficial to young entrepreneurs.

“We get to work with them very closely for a very extended period of time and we can have a bigger impact on the business,” Rannala said, noting that most companies spend between six and 12 months at MuckerLab. “The office space is sort of an enabler to the process, which is company-building.”

Scott Dudelson, a Launchpad mentor and tech entrepreneur, said putting bright young minds in the same space is an asset to growing businesses, and therefore he doesn’t think other accelerators will follow Launchpad’s lead.

“I can’t imagine this is something that will be a trend,” said Dudelson, co-founder and chief operating officer at Prodege, the parent company of El Segundo’s Swagbucks. “Every entrepreneur comes from different experiences. Being able to bounce around ideas, to me that’s invaluable.”