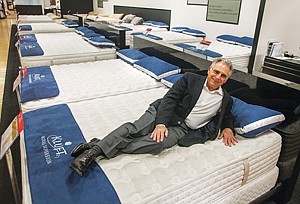 Family-owned mattress company E.S. Kluft & Co. of Beverly Hills debuted its $65,000 Grande Nuit à Paris mattress earlier this year – its priciest model. Now, the upscale retailer Bloomingdale’s of New York is planning to carry the line at select locations by the end of this year.

Earl Kluft, E.S. Kluft’s chief executive, said his company’s mattress, made of a French silk velvet fabric with double coils, is like a luxury car.

“A double-spring foundation gives the bed more conformability,” he said. “It’s like a car with a smoother ride.”

Workers hand-stitch the king-size mattress, and the price includes two pillows, a customizable hand-tufted headboard and two box springs that are also covered in the special fabric.

Kluft said it takes about one week to make the mattress set, with two to three days spent just on the headboard.

While the line will first be carried at Bloomingdale’s, the company is setting its sights abroad.

“We’re going to be exporting in a larger way,” said Kluft. “Because China and Russia have an insatiable demand for luxury products. Russia has a robust high-end mattress business.”

The Grande Nuit à Paris is the company’s second ultraluxury mattress. Six years ago, it launched the $33,000 Palais Royale mattress and box spring. That mattress is sold exclusively at Bloomingdale’s and is made with a blend of silk, merino wool and cashmere.

The company said it sells about 120 Palais Royale mattresses a year at 12 Bloomingdale’s.

Kluft founded the company in 2004 and it has manufacturing facilities in Rancho Cucamonga and in Hazleton, Pa. Staff is 175. Its lines of luxury mattresses are carried at more than 350 stores.

Kluft joked that he tends to think of quality first rather than what’s marketable.

“I have a passion for this,” he said. “And I’ve never been good as a guy that watches the cost of things.”