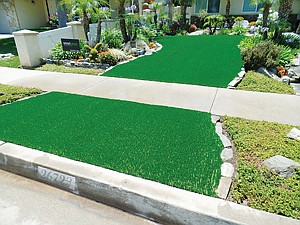 As California is in the third year of a severe drought, local landscapers are seeing more demand for alternatives to acres of lush, water-intensive lawns.

Craig Voyton, chief executive of Manhattan Beach’s SmartGrass Synthetic Turf, said sales have increased 30 to 40 percent since the drought began. In the past, he said, most installations of artificial turf were for sports fields. Now the bulk of his sales are to homeowners.

“The drought has really driven the market,” Voyton said. “Five years ago, a big part of our job in California was educating people that turf looks good. It’s become far less of an issue because people demanded a more realistic product.”

Though Southern California’s water supplies are in decent shape, the Metropolitan Water District, which serves Los Angeles County and parts of San Diego and Ventura counties, recently voted to increase rates by 1.5 percent over the next two years. To encourage conservation, the MWD increased rebates to homeowners who replace grass lawns with drought-tolerant plants or artificial turf to $2 a square foot from $1 a foot in May. The Los Angeles Department of Water and Power also increased its rebate program to $3 a foot from $2.

MWD Senior Resource Specialist Bill McDonnell said about 12 million square feet of grass have been removed by customers since the program’s creation in 2009.

A Greener Tomorrow Inc., a Culver City landscaping business, gets four or five calls a day from customers interested in replacing their lawns with drought-tolerant plants. Sales this summer have increased by about 7 percent.

Carmen Uribe, a Greener Tomorrow designer, said the motivation is simple: homeowners can knock about 30 percent off their total water bill by replacing lawns with drought-resistant plants.

The two- to three-week process of removing a lawn and putting in drought-tolerant plants or mulch involves killing the grass and laying down a fabric under the topsoil to prevent weeds from growing. After that, the customer chooses from a variety of plants including cacti, Blackfoot Daisies and other perennials to create a colorful landscape.

While residential customers have been eager to make the switch, the same cannot be said for commercial accounts.

“We install many, many, many more turf lawns than artificial,” said Richard Restuccia, director for water management at ValleyCrest Landscape Cos., a Calabasas design, installation and landscaping maintenance company that caters to corporate clients. He added that artificial turf, which throws off a lot of heat in the midday summer sun, might not be the best option for some businesses.

Where ValleyCrest is seeing demand for drought-tolerant measures is in multifamily buildings.

“We’ve definitely seen a decent uptick, especially in large apartments and from homeowners associations,” he said, fed by both the rebates being offered and the attention the drought has received in the media.

Voyton at SmartGrass said his commercial business had picked up in one area: hotels. He recently installed his artificial turf product at the Viceroy hotels in Santa Monica and Palm Springs and at L’Ermitage and Avalon hotels in Beverly Hills.

The biggest challenge, apart from the heat artificial turf generates, might be the aesthetics. Science has yet to match the lush look and feel of a lawn of well-maintained grass. But that is changing, Voyton said.

“Turf has really come into its own the last five years with the more realistic turf,” he said.

“Aside from that, the drought has really driven the market.”