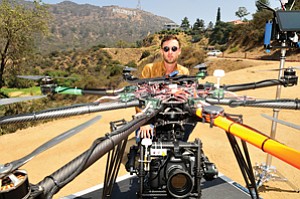 Two other L.A. aerial production companies, which are hired to get shots for commercials and action movies from the sky, are choosing to stay on the ground, for now, awaiting government regulations.

“A lot of people want to use drones, but they’re apprehensive because of the current situation with the FAA,” said Andrew Petersen, co-founder of Drone Dudes. “Other people just don’t care and they’re going for it.”

No film companies have received the FAA’s blessing to operate drones in U.S. airspace. But enforcement is lax or nonexistent, and Drone Dudes executives said they have not had any problems.

Drone Dudes builds custom drones that hold cameras. Each rig could be worth a few thousand dollars all the way up to $100,000, Petersen said.

The company is run by four managers who sometimes work as pilots, monitoring and controlling filming from the ground. It contracts with about 10 other pilots. The company charges $3,000 to $10,000 for a day of shooting, depending on the complexity of the shoot and which rig is needed. That’s much less than a manned helicopter. Cranes are also commonly used for aerial shots, but are more restricted in movement.

Drone Dudes is planning to request a waiver from the FAA that would allow flights while the agency develops regulations. But in the meantime, Drone Dudes is still being hired by studios and production companies looking for aerial images. Recent jobs include shooting footage at the Coachella music festival in Indio as well as shots for the “Tom Green Live” show in Hollywood and for the forthcoming Zach Braff movie “Wish I Was Here.”

Other local aerial production companies are grounded, but looking to get airborne if their waivers are approved. Seven aerial production companies, including Flying-Cam of Santa Monica and Pictorvision of Van Nuys, last month applied to the FAA for waivers to be allowed to fly commercial drones in the United States. Those firms are being helped in their effort by Washington trade group Motion Picture Association of America. Drone Dudes is also working with a lawyer to draft its waiver application.

Hollywood began working with drones long before they were a hot topic on cable news shows. Drones, commonly defined as unmanned aircraft flying below 400 feet, can be used to capture aerial images from perspectives that would be too low for manned helicopters.

Flying-Cam was one of the first companies to break into the movie market. It was founded by drone filming pioneer Emmanuel Prévinaire in Belgium and opened at the Santa Monica Municipal Airport in the 1990s. But the company felt the need to shut down its U.S. operations in 2011 after getting word from permitting agency FilmL.A. that the FAA’s 2007 ban of commercial drones was a problem.

“We had to take our business outside the United States,” said Haik Gazarian, director of operations at Flying-Cam, which has worked on movies in the “Harry Potter,” “James Bond” and “Mission: Impossible” series.

It was a substantial hit to Flying-Cam, which charges $15,000 or more for a day of shooting and was bringing in revenue of about $1.5 million a year from U.S. operations a decade ago.

It was also a blow to local production, since Flying-Cam was shooting about 25 projects a year in Los Angeles. In one case a couple of years ago, Flying-Cam was hired for a PlayStation ad that was to be shot in downtown Los Angeles but had to be produced in Budapest, where drones could be used.

Flying-Cam kept its Santa Monica office open, but downsized the space as it made full-time employees into contractors. The firm has stayed busy overseas and worked on the latest “Transformers” movie in Hong Kong.

But just as Flying-Cam was winding down in the United States, Drone Dudes was taking off. The company was launched three years ago by Petersen, a cinematographer, and his cousin Jeff Blank.

They began flying as high-quality digital cameras came down in price and Petersen began building the rigs, learning what worked through trial and error.

Since then, business has skyrocketed. Revenue has doubled each year, said head of production Eric Maloney, as the number of jobs has increased along with the company’s rates.

Demand for Drone Dudes’ services has gone up as filmmakers and commercial and TV directors look for new angles to make their work stand out. Drones are less expensive than a manned helicopter and can provide greater versatility than a crane.

Maloney said Drone Dudes is aware of concerns about privacy and tries to keep the aircraft out of the public eye when possible. For example, he uses a small model comparable in size to a toy helicopter when flying in residential areas. The firm also does much of its work in sparsely populated areas and designated production areas away from the public.

“We only fly in really smart situations,” he said.

Drone Dudes leaves the permitting up to clients. FilmL.A. does not approve permits for shoots using drones, so that information is often left off applications.

Keeping a clean safety record and avoiding complaints also seems to be an important part of staying out of trouble.

FAA spokesman Les Dorr said the agency responds to complaints about drone operators by calling the drone user and explaining the FAA’s rules. The agency could also send a cease-and-desist letter if the infraction is repeated, but the FAA has only pursued fines in the case of careless and reckless operation of drones.

“We’re responsible for the entire U.S. aviation system. We have to prioritize our safety resources. If we’re made aware of something that is a hazard, you can make sure we’re paying attention to it,” he said.

Mark Bolanos, a Los Angeles Police Department officer and pilot who is a department expert on aviation issues, said the LAPD is not in a position to enforce the ban on commercial drone use.

“Are we taking proactive enforcement? No,” he said.

The companies that applied are hoping for word on their waivers from the FAA soon. On top of the exemption requests, the FAA is supposed to provide a framework to introduce commercial drones into U.S. airspace by September of next year – a deadline set by Congress after the passage of a law effectively legalizing commercial drones in 2012. The FAA is expected to respond to the applications by early October.

Last month, the FAA gave its first go-ahead to fly above U.S. soil to a commercial drone made by AeroVironment of Monrovia that is used above oil fields in the Arctic.

Flying-Cam’s Gazarian said if the FAA grants his waiver, he will rehire the workers that had previously staffed the Santa Monica office.

Pictorvision, which charges about $30,000 a day for its helicopter filming services, is also hoping for a favorable FAA decision that will allow it to open a drone division.

“We are confident that we’ll eventually get the waiver,” he said. “I can see it being a multimillion-dollar business.”