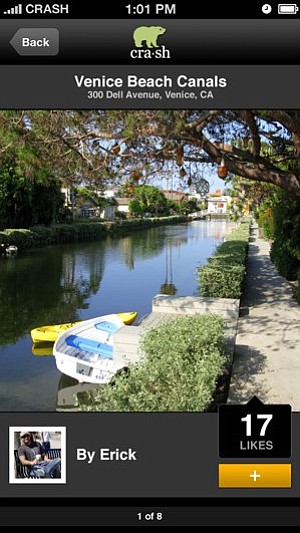 The life of any startup comes with a definite end-point, but most don’t expect them to arrive soon after launch.

Such is the case with Pasadena’s Crashworks Inc., maker of a free city-guide app for iPhones. The company was acquired at the end of December by downtown L.A.’s Oversee.net, 10 months after going live with the backing of seed money from Pasadena incubator Idealab.

It was a bittersweet ending for Crash’s founder and sole employee, Erick Laubach.

The former Ticketmaster executive developed the app to provide a photo-based guide to a city’s sites, attractions, and public art. Its first featured city was Los Angeles, where Laubach himself took photos of 500 spots, including the L.A. River and Venice Beach. It was later expanded to 6 more cities, with hopes of one day reaching more than 60.

There was some initial traction, especially as the company began advertising through Facebook’s mobile app. But Laubach said Crash topped at 18,000 downloads and wasn’t close to generating any revenue.

He hoped to keep the company running, but the seed money ran out last April and no investors were interested in throwing in for a Series A round.

“People were nervous about scale. It was a question about how you monetize without millions of users,” Laubach said. “There wasn’t a traditional business model and that was the biggest hiccup.”

He wouldn’t disclose the exact price of the acquisition, but put the figure “below $1 million,” enough to recoup the initial investment.

Oversee, which began as an online marketing and lead generation company but has since branched into app development, is folding Crash into its new online travel service, WanderWe. It will serve as the foundation of WanderWe’s forthcoming iOs app.

But Crash’s founder will not be following his company to its new home. He’s instead taken a job with Saatchi Online, a digital marketplace for artwork, which seems him rejoining his onetime boss, former Ticketmaster Chief Executive Sean Moriarty.

Although he’s disappointed, Laubach concedes that Crash’s exit is a better finale than many companies get.

But his brief taste of the tech startup life has kept him wondering what could have been.

“I’m happy where I am now,” he said. “But I was happiest spending 15 hours a day working on an app.”