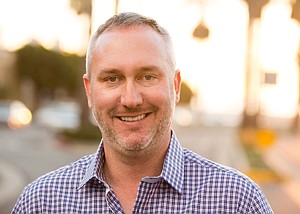 Mobile advertising platform Airpush Inc. continues its growth with the opening of its Venice headquarters and the hiring of former Google Inc. exec Matt Shaw.

He said that he chose Airpush for an opportunity to join a startup that’s reached more than an estimated $100 million in revenue with a network of more than 120,000 mobile apps.

“The last three years (at Google) were fun and exciting but in a different way,” said Shaw. “I wasn’t on the street. I didn’t have the sort of speed and agility that I’d like at startups.”

Shaw said his goal is to help expand Airpush’s clients from app developers to brand advertisers. As reported in December by the Business Journal, the company’s recent acquisition of Hubbl in New York gives it additional data targeting tools for advertisers.

“Airpush has grown up as a performance network, helping people drive downloads of applications,” said Shaw. “My job here is to continue to grow and maintain that core business, but also figure out how we activate that third-party data layer to build a brand network.”

Airpush was founded in 2010 and has a staff of about 230. Founder Asher Delug managed the company from his home in Malibu, but moved headquarters last week to an office in Venice. It also has an office in Bangalore, India.

The company said it is profitable.

Internet ad company ValueClick Inc. has shed its name to transform its image. The Westlake Village company has rebranded itself as Conversant Inc. and combined its five separate digital marketing operations into one unit.

John Giuliani, the company’s president and chief executive, said the move was designed to make things easier for its clients.

“We’re really trading the old ValueClick for conversations,” he said. “And that’s why Conversant is really an apt name for us.”

When Giuliani took over as chief executive more than a year ago, he said that he realized the company’s websites were no longer core to its strategy.

“We feel the normal pressures that we always have competed against,” he said. “Where we see is really the opportunity to help make it easier for our customers to buy from us and focus on getting them better results.”

Conversant has a staff of about 500.