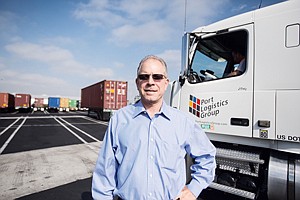 When California’s cap and trade program expands Jan. 1, transportation companies fear fuel prices will jump at the pump, forcing drivers and companies to pass costs on to their customers, creating a ripple effect in the economy.

An increase in prices – particularly a big one – could hit Los Angeles especially hard, given all the idling that occurs on congested roadways and because of the many trucks that carry goods to and from the country’s largest port complex.

Since such an auction for transportation fuels has not been done, no one knows how much prices might increase. Estimates range from zero to 74 cents a gallon or more for both gasoline and diesel. In any case, some lawmakers have awakened to the potential problem and have introduced bills to delay the expansion, although the environmental lobby is resisting any delay.

Local trucking companies are growing concerned. Mike Johnson, operations manager at Port Logistics Group in Rancho Dominguez and a board member of the Harbor Trucking Association, said higher diesel prices will be a real hardship for truckers, especially considering that many of the short-haul truckers who work at the ports are independent contractors who pay their own way at the pump and can’t easily pass on price increases.

“These guys, it’s not like they’re making millions of dollars,” he said. “This is going to make it very difficult for the owner-operators to purchase fuel. It’s just going to cost more.”

In a letter sent earlier this month to the California Air Resources Board’s leadership, the Western States Petroleum Association contends that no other governments have attempted to use cap and trade to regulate fuel markets and that the expansion “will have a major impact on California fuel markets and very possibly consumers.”

The creation of California’s cap and trade program followed the 2006 enactment of AB 32, an anti-global warming law. Cap and trade requires businesses that produce a high level of carbon emissions to reduce their emissions below a “cap” or to “trade” – or buy – credits that can be obtained at auction or on the open market in order to get permission for any emissions that exceed the cap.

The program has already been applied to refiners for their on-site emissions, and the expansion Jan. 1 would require refiners and other fuel suppliers to buy credits for tailpipe emissions created after their products are sold.

There’s something of a debate on how much that might affect prices at the pump.

The Air Resources Board, the main regulator of the cap and trade system, believes there will be no near-term impact. Although the expansion of cap and trade will begin next year, full compliance will be phased in through late 2018 and fuel suppliers might not have to buy credits at all next year, according to the board. Firms can also meet obligations by bringing cleaner fuels to market.

What’s more, if there were any increase in costs, they could be absorbed by the companies, according to a spokesman for the Air Resources Board.

The state’s nonpartisan Legislative Analyst’s Office forecasts that gasoline prices would likely rise 13 to 20 cents a gallon in 2020 as a result of cap and trade. But it didn’t predict how much prices might increase Jan. 1.

Energy expert Severin Borenstein and a supporter of cap and trade, writing last week for the Energy Collective, predicted the increase would be in the range of 9 to 10 cents a gallon for both gasoline and diesel – which is in the range of normal price changes.

But industry sources are not so sanguine. Stonebridge Associates, a Sacramento consultancy that produced a study for the California Trucking Association, predicts the effects of cap and trade, combined with those from a related mandate, could hike diesel prices by as much as 74 cents a gallon next year.

How might that affect a trucker? A big rig’s tanks might contain 300 gallons of diesel, said Johnson at Port Logistics. If a driver pays $4 for a gallon of diesel, a fill up would cost $1,200.

A relatively modest price increase on the order of 10 cents would add $30 to the cost of filling up that truck, within the range of normal price fluctuations. However, a 74 cent-a-gallon increase would raise the cost of a fill up to about $1,422 – more than $200 greater.

If cap and trade does indeed lead to painfully higher prices, individual truckers might not be the only ones feeling the hurt. Chris Shimoda, policy director for the California Trucking Association, said that higher fuel prices could lead to reduced exports of California-grown crops. In addition, some trucking businesses could move to other side of the state line.

“You could fill up right across the border in Nevada. You’d have none of this carbon pricing and you’d be able to get in and out of state very easily,” he said.

Meanwhile, some opponents of the expansion of cap and trade are mounting a social media campaign on Twitter and with emails to protest what they call a “hidden tax.”

One recent message from a group called Fed Up at the Pump read: “Are lawmakers really trying to duck the debate on whether you should pay billions more in a hidden gas tax next year?” It predicted a 16 cent-a-gallon increase Jan. 1.

The group, which labels itself a grassroots coalition of consumers and businesses and includes oil companies that would face the consequences of the expansion, said the impact will be wide.

“It will also affect the price of goods and services that rely on oil and gas for transportation, including food and water, energy and electricity, public transportation, fire protection and police patrols.”

Jerry Azevedo, a spokesman for a group called the California Drivers Alliance, which includes the WSPA as well as agricultural organizations and business groups, said that while there are widespread expectations that retail gas and diesel prices will increase, no one knows by how much. There are no precedents for cap and trade being applied to a consumer product here or elsewhere.

“This is the first time anybody’s tried this. It is experimental in that sense,” Azevedo said.

If the expansion is delayed, Azevedo said they want the Air Resources Board to update its economic analysis, develop some kind of consumer protection plan for people who cannot afford higher gas prices and do an assessment to determine if AB 32 is meeting its goals.

Both measures are still in their early stages.

However, “I’m optimistic that we’ll have an opportunity once we get everybody engaged to get it on the floor,” Perea said.

State Sen. Darrell Steinberg, D-Sacramento and other Democratic senators on an environmental panel have already written to Gov. Jerry Brown of their preference to keep current plans intact.

“There is already a majority of signatures (from the environmental committee) to the governor to stay the course on a very popular environmental law,” Steinberg spokesman Rhys Williams said.

Williams said delaying the extension of cap and trade would unfairly give oil firms an exemption to state law and would overturn the will of voters who upheld cap and trade at the polls in 2010.

Vidak, however, said he doubts the vast majority of Californians have any idea that some forecasts are predicting fuel prices to increase as a result of cap and trade. There are many people in his Central Valley district who would be severely affected by rising fuel prices and that a delay is something both parties should be able to agree on.

“It’s a regressive tax. I represent some people who can’t take a tax hike at all,” he said.

Some businesses, especially those in the clean energy field, swear by the cap and trade concept and support the extension.

CalStart Chief Executive John Boesel said fuels suppliers, like other firms already affected by cap and trade, should have to pay a cost for their emissions so the state can use those revenues to finance programs that might benefit the environment.

“We think that’s a good policy and the revenue from the oil company payments will be put to very good use,” he said.