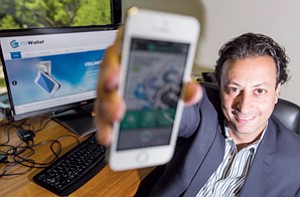 CU Wallet is one of several financial tech firms that have sprung up in Los Angeles over the last few years making a foray into the burgeoning mobile payment sector. After all, roughly 30 percent of all U.S. retailers accept some form of mobile payments.

Formed late last year, the company has developed a mobile wallet that financial institutions can incorporate into their existing mobile banking applications. So, for example, a customer of a credit union might have downloaded that lender’s app that could accept and incorporate CU Wallet’s product.

In fact, CU Wallet has focused on selling its application to credit unions – hence its name – and announced last month that since its launch it had signed deals with 65 institutions across the country representing more than 7 million members. It has targeted credit unions rather than banks, which are generally larger and have the resources to develop similar applications in-house.

An added feature of CU Wallet’s product is that it will offer a lower-cost alternative to credit card-processing costs if a credit union customer chooses to pay by direct debit from his or her account.

“Swipe fees,” charges assessed by Visa Inc. and MasterCard, cost the nation’s retailers some $50 billion a year, second only to labor as their greatest annual expense. The fees vary but can be 3 percent to 5 percent or more of the retail price.

“Wal-Mart and Target hate each other, but they hate Visa and MasterCard more,” said Paul Fiore, founder and chief executive of CU Wallet of Woodland Hills. And the retail industry is excited, too.

“There’s an opportunity now for mobile technology to provide competition to the payment market that nothing else has been able to do for decades,” said Brian Dodge, executive vice president of communications and strategic initiatives for the Retail Industry Leaders Association in Arlington, Va.

CU Wallet’s product would work like most mobile wallets. If you don’t have one yourself, you might have seen a barista at a Starbucks scan the smartphone of the person in front of you rather than taking cash or a credit card. The payment in this example would be routed through the standard credit card system – and Starbucks would pay a swipe fee, or a percentage of the retail price. But payments made through CU Wallet’s mobile wallet would potentially bypass credit cards and chop Starbucks’ fee by half or more, according to Fiore.

CU Wallet’s wallet is in a prepilot phase, and integrating it into each credit union’s app will take time because typically those apps are created by different developers. That means that at the outset CU Wallet will use the more expensive credit card system for processing payments. But by the middle of next year, Fiore said, it will have full implementation of the technology allowing it to use the less expensive direct debit system and the company expects to undercut credit card-processing fees by a significant margin.

When that’s done, he wrote in an email, “we’ll be able to offer merchants a direct settlement option that will be 50 to 80 percent lower than the current Visa and MasterCard interchange.”

Yet even when it’s in place, customers will still have the option to pay using their credit or debit cards linked to the wallet rather than having the money taken directly from their account.

In addition to setting up conventional credit card-based apps for retailers, DoubleBeam also develops technology that allows a retailer to draw money directly from a consumer’s bank account. That costs the retailer less than the fees charged by the wallets created by Starbucks Inc., Google Inc., Apple Inc., Facebook and Amazon.com Inc., all of which link to more expensive credit card accounts.

Fiore, who served as DoubleBeam’s chairman, brought in Ted Tekippe, with whom he’d worked at Green Dot, as chief executive.

One of the backers of CU Wallet, Fiore’s latest venture, is Shai Stern, chief executive of CheckAlt, an L.A. developer of software for banks and other financial institutions that has developed a system to process check payments more efficiently. It bought the Eras division of North Canton, Ohio’s Diebold Inc. in June, a move intended to expand its foothold in the sector, and it partners with roughly 400 institutions across the United States.

“We can create payment options for mobile as well,” Stern said.

Stern also led the investment team that purchased the bulk of Fiore’s stake in DoubleBeam late last year, taking over as chairman. Fiore retains what he said is a very small stake in the business.

So why not roll the three companies into one?

“We haven’t had that conversation,” Stern said. “Being able to articulate a focused value proposition right now is the right thing to do.”

Fiore said CU Wallet, which handles the institutional side of the transaction, and DoubleBeam, which develops payment apps for retailers, do not compete with each other.

And, he added, there is room for both mobile payment apps developed by financial institutions and retailers in the $4 trillion marketplace.

Even though tens of millions of Americans already use third-party mobile wallets and CU Wallet’s product hasn’t launched yet, recent data is making the company and credit unions optimistic about their chances in the crowded market.

A study released in October by Pleasanton’s Javelin Strategy & Research found that 43 percent of consumers would be likely or very likely use their primary financial institution’s mobile wallet if it were available – the highest percentage of any other option. PayPal’s wallet came in second at 34 percent. The wallet created by PayPal routs transactions through the cheaper Automated Clearing House network, an electronic payment system utilized by financial institutions.

Fiore said his product will be enticing to both retailers and credit unions because the wallet will allow them to offer targeted advertising to customers using advanced analysis of their shopping history – for a fee, of course.

“We work with the merchants to present offers and incentives to the member base and we share revenue back with the credit union,” he said. “The credit unions can count on revenue streams of about $350 a year for each wallet they deploy,” though the company expects that number to rise over time. With a potential 7 million users among its 65 credit union contracts, that could be a significant source of revenue for the institutions.

CU Wallet charges the institution a one-time fee of $25,000 on average for setting up the system and takes additional monthly fees calculated in part on how many people use the wallets, plus per-transaction charges.

Keith Sultemeier, chief executive of Manhattan Beach’s Kinecta Federal Credit Union, said he’s eager to integrate CU Wallet’s product into his institution’s smartphone app, but it probably won’t be active until next year based on his conversations with the developer.

“Instead of having … Google or Apple get in between us and our member, we should do that,” Sultemeier said of mobile wallet offerings.

He said the system is more secure than credit and debit card transactions, since each payment involves a QR code that can only been used once. Plus, the all-digital transaction will cut down on overhead costs.

“It’ll probably be more efficient from a cost-processing standpoint for us,” Sultemeier said.

And the more credit unions that sign up, the more leverage CU Wallet will have when it comes to convincing merchants to accept its product in stores.

“The value for us is in collaboration,” he explained. “When a bunch of credit unions get together, we have scale.”