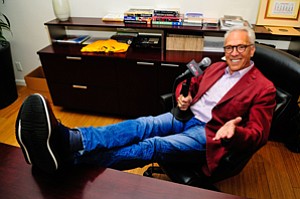 Adam Carolla took his boisterous personality from broadcast radio to podcasting with $100,000 of his own money four years ago – and it turned out to be a good investment.

He expects to hit revenue of $4 million this year, thanks to a still-new industry that specializes in selling advertisements for podcasts.

Now, the company that got its first big break with Carolla, Launchpad Digital Media in Beverly Hills, is taking the next step by selling localized ads for national podcasts.

“We’re taking this out of the mom-and-pop stage,” said Norm Pattiz, chief executive of Courtside Entertainment Group LLC, which owns Launchpad. “We’re creating an industry with significant critical mass to be able to present it to advertisers.”

Pattiz, known in the radio world as founder of radio syndication company Westwood One, started Courtside in 2010. In addition to Launchpad, whose name will be changed to Podcast One Sales next month, Courtside owns Podcast One, which serves as a platform for more than 200 podcasts that its sister company sells ads on.

Hosting 200 podcasts that have a combined download rate of 90 million a month is a selling point to advertisers, Pattiz said.

A deal it struck last month with Abacast Inc., a Vancouver, Wash., company that offers audience analytics for digital audio, will allow Launchpad to place geographically targeted ads on podcasts.

For example, if a major retailer purchases time on Carolla’s show but wants to run two different commercials in two different states, it can do that with technology from Abacast.

“It gives us parity with traditional media in the sense that we can provide the same kind of services,” Pattiz said.

Listeners can download digital radio shows, or podcasts, to their computer, smartphone or tablet and – unlike broadcast radio – they can be stopped, paused or replayed at leisure.

However, Mary Beth Garber, executive vice president of radio analysis and insights at Katz Radio Group on the Miracle Mile, said radio offers advantages to advertisers that podcasts don’t, such as last-minute changes to copy and live announcements.

“The simultaneous reach that you get on radio stations and simultaneous mass reach, particularly localized, is a pretty good deal for an advertiser,” Garber said.

Beyond that, some advertisers want to be able to track ratings, which they can do and do quickly with radio ads.

On the other hand, podcast ads might hit a more targeted audience. An advertiser whose products tend to be favored by the same type of person who likes Carolla, for example, might be tempted to advertise on that program. The advertiser could get an even bigger pop if the podcast host endorses the product.

Pattiz sees podcasts as the new frontier of radio and an open field for national advertisers to play in and he is putting his own money into the company.

“When I got into this, I knew I would have to support the business until it became profitable,” Pattiz said. “We’re not profitable yet, but I’m prepared to spend what I need to spend to be able to prove that this podcasting does have the same dynamics as when I took Westwood One from an $11 million new public company to nearly $600 million.”

Pattiz founded Westwood One in its namesake L.A. neighborhood in 1976 and it grew into one of the largest producers of radio programming in the United States.

He left the company to form Courtside. The radio production and distribution company, whose stable include shows by Laura Ingraham and Bill O’Reilly, started with a staff of four and now has 20 employees.

In 2012, Pattiz met Christopher “Kit” Gray, who was operating his own advertising company for podcasts such as Carolla’s. The two formed a partnership last year and created Launchpad, where Gray is president.

Gray is the one who decided to sell advertising for podcasts in 2009 and pitched the idea to Carolla. While the podcast host said he wasn’t looking for an ad salesman, he wasn’t going to stop Gray from trying.

“We got a Viking ship. You want to grab an oar and start helping us row, why not?” Carolla said. “I didn’t want to discourage anybody.”

By the time Gray partnered with Pattiz, Gray was bringing in $2 million in annual revenue.

Most advertising on podcasts comes from direct-response advertisers such as 1-800 number advertisers, but Gray said they have been able to attract national advertisers this year including Fortune 500 companies.

The ads range from live endorsements by radio personalities to traditional commercials. Prices vary depending on audience and availability of ad time.

For example, an advertiser who wants a spot on a popular program such as “The Steve Austin Show” – whose first show was downloaded by 750,000 people – will be billed $35 for every 1,000 downloads, or more than $26,000. Advertisers on less popular shows are billed as low as $4 per thousand downloads, so their bill would only be a few hundred dollars.

Even though Launchpad has 200 podcasts for its listeners to choose from, it is looking to grow slowly, making sure that new hosts have a national presence. The company will be selling ads for British comedian Russell Brand, who just signed a contract to do a show for Podcast One.

Pattiz said podcasts offer more flexibility than traditional radio and build on the fan base of a host, as the shows can easily be shared and promoted on multiple platforms, devices and social media networks.

“Brand has millions of social media followers,” Pattiz said. “We can use those social media followers to let them know that Russell Brand is going to do a podcast. We don’t have to go out and spend a humongous amount of money, which we don’t have, to buy radio spots and television spots because we’re reaching more people. It really is sort of the perfect storm for promoting something that’s new.”