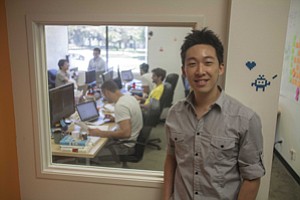 Before you buy anything online, e-commerce stores already have a pretty good idea of what you want.

And in the new and increasingly popular game of data gathering, Retention Science Inc. has positioned itself as a private eye for online retailers. The Santa Monica firm sifts through millions of data points that a store’s customers leave across the Internet then suggests ways to keep the customers coming back.

Those suggestions can come in the form of customized offers, tailored marketing campaigns, even the time of day a company will email out a promotion.

Retention, which late last month announced an infusion of seed money from San Francisco’s Forerunner Ventures, has now pushed its initial funding round past $2 million.

The marriage of big data and e-commerce is one that’s been attracting some interest from major retailers. Earlier this summer, Wal-Mart Stores Inc. acquired Inkiru Inc., a Palo Alto startup, to shore up its big-data prowess. And though Retention is sitting on a healthy round of seed funding, one of its closest competitors, New York’s Sailthru Inc., has pocketed $28 million in venture capital.

So far, Retention has worked with such stores as Santa Monica subscription e-commerce site Honest Co. and Louisville, Ken., custom apparel maker CafePress Inc. Company executives said they were also working with some big-box retailers but were not at liberty to disclose names.

Retention co-founder Jerry Jao said the game for his clients isn’t about attracting new customers. Rather, it’s about using massive pools of data and algorithms to get a client’s existing customers buying more stuff more frequently.

Forget the comment cards or feedback surveys, the new way customers chat with stores might be from the things they don’t even know they’re saying.

“Data help businesses understand their customers way better,” Jao said. “It’s the basic way of understanding how exactly they can talk to them.”

Of course, it doesn’t come cheap. A client can expect to spend roughly $100,000 a year for the service.

Retention is part of a new movement of tech companies that are trying to wrangle troves of personal data into a business plan. It’s a movement buoyed by the growth of broadband Internet and the decreasing cost of computing power.

Stores have long been pushing items based on previous purchases – think of the “recommended items” section that Amazon.com uses on its website.

But the uptick in big data has taken the strategy into surprising new areas. What about rearranging items on a webpage based on the price a store thinks you’d be willing to pay?

It’s already happening to some extent.

Hamid Nazerzadeh, an assistant professor at USC’s Marshall School of Business, said online travel agency Orbitz has been organizing its search results based on a correlation between price-point preferences and the type of computer a customer is using.

Mac users, for instance, are known to spend 30 percent more on hotel rooms on average than PC users, Nazerzadeh said. Therefore, someone on a Mac searching for rooms is more likely to see a four-star hotel come up at the top of Orbitz’s search results than someone on a PC.

“You don’t necessarily change the price,” he said. “You just use information to display a better selection of items. Sometimes that doesn’t necessarily mean the cheapest deal.”

Retention is Jao’s third attempt to start a business in the e-commerce space. His two startups – a platform for artists to promote products to their fans and a social media analytics service for online stores to connect with customers – failed to gain traction with investors.

But the tools he gained in the world of pushing products online led him to pivot, developing a business providing big-data services to online retailers. He enrolled the new company in Santa Monica tech accelerator Muckerlab in 2011. Retention has since grown into a 14-person outfit working from an office not far from the Santa Monica airport.

Erik Rannala, who heads up Muckerlab, said Retention’s specific focus on helping e-commerce sites target existing customers rather than reaching new ones is a clever way to bring in more revenue while keeping costs down.

“Historically, a lot of time and money is spent on acquiring customers through advertising,” Rannala said. “It’s much cheaper and cost effective to retain and reactivate already existing customers.”

When Retention begins working with a client, it will take at least three months to gather enough data before starting to make recommendations. Jao said he prefers 30 separate points of information about each customer for there to be any meaningful conclusions.

The more specific the information gets, the more precise the recommendation. For example, someone whose profile indicates he wakes up early for work might be better suited for a promotional email early in the morning. Someone whose shopping habits tend to be quick, deliberate purchases, is probably best marketed through a concise, direct campaign.

Jao said there is a logical limit to what big-data processing can do. Even as a customer’s personal information comes to play a larger role in the strategy of running an online business, humans will never be cut out entirely from the product planning and marketing process.

“There’s human intuition and sense of fashion that can’t be ever be replaced by stats and data,” he said.