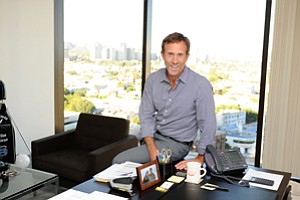 The late John Anderson earned the beginnings of his billion-dollar fortune distributing Budweiser beer, but his son Bill has turned his attention to lesser-known and less potent potables.

Anderson said Health-Ade has a strong executive team and, just as important, the kind of product loyal customers will buy regularly.

“We like to find brands where you want to have four or five of these drinks a week,” he said. “We’d been looking for the right kombucha investment for some time.”

First Beverage is an offshoot of Anderson’s beverage-industry investment bank, Century City’s First Beverage Group. The bank has lined up investments and consulted for other beverage makers, from juice companies to coffee roasters, but Anderson said he saw the need for a fund that will help companies fill the gap between the startup stage and a deal with a larger beverage company.

The fund, launched in April, aims to make investments of between $2 million and $5 million in high-growth small companies, and take stakes of between 20 percent and 50 percent. First Beverage declined to disclose the size of the fund. For portfolio companies, First Beverage Ventures can offer capital, industry analysis as well as access to distributors and potential buyers. Fund investors include beverage distributors and a Coca-Cola division that invests in small beverage brands.

For now, at least, the fund is focusing on companies that make nonalcoholic drinks. While the Anderson name will be forever tied to suds, the beer and wine market looks much more saturated than, say, the raw juice market.

“We’re like any other investor,” Anderson said. “We’re going to where the best opportunities are right now. We think there are going to be 40 or 50 craft breweries that do incredibly well, but those are all highly successful companies already.”