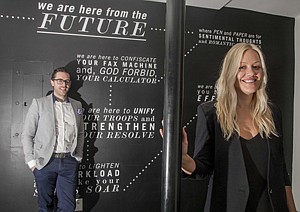 It’s hard to find a pen or paper at NuOrder Inc.’s West Hollywood offices. Its co-founders don’t want its biggest competitor hanging around.

Heath Wells and his wife, Olivia Skuza, launched NuOrder two years ago with the intention of bringing the hidebound world of apparel retailing into the digital age. Their product, a cloud-based system of digitized order forms and catalogs, is intended to streamline the ordering process between clothing brands and retailers. It also offers sales analytics and the ability for brands and retailers that don’t have a relationship to find each other.

“Sales people spend three, four hours a day faxing and making Excel custom line sheets,” Wells said. “With NuOrder, sales (people) can focus on sales and have more time to prospect customers. On the flip side, the back house can ship faster and accurately.”

That’s not to say there aren’t challenges. NuOrder faces a strong competitor and many in the apparel industry still love their paper-based ordering system.

But in its first two years, the company saw rapid growth. It opened a branch in New York this summer, doubled its headquarters office space last month and is about to close on a B round of venture capital funding. It now says that it has deals with more than 600 brands, including Hurley, Levi’s Vintage Clothing and Helmut Lang. He wouldn’t disclose revenue.

Wells said retailers have free access to the platform, but the client brands pay about $200 for each sales rep to access the system, spending an average of about $6,000 to $7,000 on the platform yearly. Once on the platform, retailers can look at a brand’s inventory and order items at any hour or when something goes out of stock. The system also allows manufacturers to send photo catalogs and other proposals for prospective retailers to see.

The company raised about $3 million in a series A round led by local venture capital firms Upfront Ventures (formerly GRP Partners) and Greycroft Partners that closed a year ago. Designer Rachel Zoe and Beverly Hills talent agency Creative Artists Agency also participated. Wells said its series B round, which will help the company hire more development staff to further improve products, will close in coming weeks.

The company reported that it processed about $60 million worth of transactions in September and projects that it will process $500 million for this year.

While the business is catching on, NuOrder has two fights.

On one front, it faces a more established, larger and well-financed competitor in Joor, a three-year-old New York company catering to high-end retailers and brands.

Still, that’s less than 1 percent of the $150 billion-a-year apparel industry, so there’s plenty of upside potential for new players.

But the other front is perhaps a greater hurdle: breaking into a trade that’s set in its ways. Many buyers and sales reps are perfectly happy with their well-established, paper-based way of doing things.

“You can’t fax,” she said, “and people still love their fax machines.”

Wells and Skuza conceded that convincing people to switch from older technology is the biggest challenge. But they said brands in particular have warmed to the product lately.

“There is more resistance on the buyer side, but that gap is closing,” Skuza said.

Wells and Skuza, who ran a publishing company in Australia, sold it and moved to the United States in 2008 with a plan to open a marketing business catering to the fashion industry. The United States, Wells said, offered a larger market, and they chose Los Angeles because of its lower rents and labor costs compared with places like New York and San Jose.

They were running State of Tomorrow, which they described as a fashion digital creative agency, when the idea for NuOrder hit.

At a trade show in Las Vegas, they watched as sales reps slowly processed paper forms and tried to recall what they sold.

“Sales reps were spending 25 minutes of a 30-minute appointment handwriting orders. We saw people with catalogs and order pads. Everything was manual,” Wells said. “We were wondering why none of this had gone digital.”

Another pull, Skuza said, was that brands had slashed travel budgets during the recession, resulting in fewer face-to-face interactions between buyers and brands. There was also the advent of the tablet, which made the whole process easier.

So the two set out to create a prototype in August 2011; they launched their business in June 2012.

The system allows retailers, which need to register with NuOrder, to order from brands at all hours and restock on the fly. It permits manufacturers to show retailers when an item is available to ship and the amount of inventory available. NuOrder also includes analytics software to show brands and buyers their best-selling items and other important metrics.

Though Wells said his platform’s focus is to streamline ordering, its catalog function also attracts brands because it helps them connect with retailers who don’t carry their goods.

Despite the streamlining offered by NuOrder, Joor and others in the space, there is still resistance from some quarters of the industry, where buyers often base decisions as much on feel as on look.

Ilse Metchek, president of the California Fashion Association in downtown Los Angeles, said the biggest reason for hesitation was because the apparel industry still heavily relies on testing the physical feel of a product.

She said the platform can be a benefit for brands with existing relationships with buyers, allowing buyers to see something they like and get a sample to get a feel for the fit of the product.

“If the buyer was devoted to other lines, digital does not help in terms of fit or touch,” Metchek said. “This is an add-on. If I were a buyer, it allows me to see a line digitally and ask for a sample.”

Eventually, the company might branch out into other industries – Wells said they have been approached by manufacturers from industries as diverse as housewares, books and motorcycles – but for now he wants to focus on apparel until he gets it right. They also want to open offices in Europe.

Meantime, they are content to expand in their new home, which they credit in part for NuOrder’s growth.

“Los Angeles carries the Australian culture with it. It’s still accessible,” Wells said. “New York is incredibly expensive if you’re starting out. And you aren’t fighting as hard as in Silicon Valley for talent, especially during the growth stage, where unless you’re in the top 1 percent, it’s bloody difficult.”