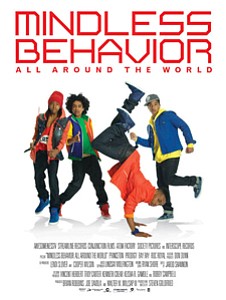 YouTube content is making the sizable jump to cable TV with greater frequency. But AwesomenessTV, an L.A.-based YouTube channel, is making the even larger leap to the big screen.

Awesomeness, which produces content aimed at a teen audience, is releasing its first feature film, “Mindless Behavior: All Around the World,” into 117 AMC theaters March 15. The movie documents the international tour of L.A. boy band Mindless Behavior, and expands on tour footage that has already aired on the Awesomeness YouTube channel.

The company is both the producer and distributor of the film, and co-founder Brian Robbins said it used digital production, marketing and distribution to keep costs down.

“This is the model we’ve been hoping for,” said Robbins, who has produced TV series such as “So Random” and “Smallville,” and theatrical releases “Varsity Blues” and “Good Burger.” “You’re able to build something online and (forge) a relationship with the audience. If you know how to reach them, you don’t need $40 million of marketing money.”

The project started to come together last year, as Awesomeness was launching with the goal of becoming a major teen destination. Robbins spoke with longtime friend Troy Carter, who manages Mindless Behavior and other acts including Lady Gaga.

Robbins pitched Carter on the idea of documenting the overseas portion of the band’s tour and posting the videos to his YouTube channel. When the videos racked up large numbers of views online, Robbins decided to follow the tour back to the states and make a full-length feature film.

AwesomenessTV was the 14th most popular channel on YouTube in December, according to L.A. digital marketing firm Blayze Inc.

To get AMC on board with exhibiting the movie, Robbins pitched a theatrical rollout concentrated in parts of the country where the band sold tickets to its shows with ease. He said he was also able to secure a box office revenue split of about 50-50 with the chain, which is typical for studio distributors.

Awesomeness expects to feed off the hype from the release of Mindless Behavior’s sophomore album, which will drop March 12.

The NBCUniversal-owned channel announced it gave the green light to two more original series, “How I Rock It” and “Risky Listing.”

“How I Rock It” will be hosted by pro basketball player and native Angeleno Baron Davis and will profile style icons and influencers. It is being co-produced by L.A.’s Ryan Seacrest Productions and Citizen Jones.

“Risky Listing” is a six-part, one-hour reality series centering on real estate agents who deal in the world of high-profile nightlife venues in New York. It is being produced by Zodiak New York.

The channel previously announced series including “Knife Fight,” a cooking competition show co-produced by L.A.’s Flower Films and Authentic Entertainment, and travel series “The Getaway,” which will be produced by Zero Point Zero of New York.

The idea is to program male lifestyle content targeted at an upwardly mobile audience that will attract advertisers. Before its rebranding last month, the channel was called G4 and focused on the video-game community.

“We are building an exciting slate of original series for men with style and substance,” Matt Hanna, head of original programming for Esquire Network, said in a statement.

DreamWorks Animation SKG Inc. is hoping to get an “Angry Birds” bounce at the box office for its upcoming release “The Croods.”

The Glendale animation studio announced that it will release a mobile game based on the movie and developed by Rovio, the Finnish firm behind Angry Birds, on March 15.

The game will feature fictional Stone Age-inspired characters foraging for food along with other creatures.

Rovio previously partnered in 2011 with 20th Century Fox for the Angry Birds Rio game, which piggybacked on the monumental success of the Angry Birds games to help popularize the characters from the movie “Rio”.

DreamWorks is similarly hoping the game can spur some early excitement for “Croods,” which is set for release March 22.

There is much at stake for DreamWorks. The studio’s previous release, “Rise of the Guardians,” missed box office expectations and caused the studio to take a large write-down in its latest earnings.