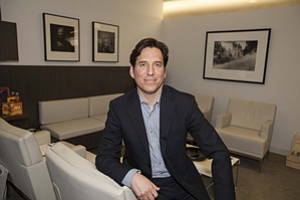 Hollywood talent agencies, forever gunning for the next project for their clients, have been eyeing a once unlikely star: tech.

Creative Artists Agency, the über-celebrity representation firm, recently stepped up its involvement with a new venture capital fund. It isn’t huge – $20 million, according to a filing with the Securities and Exchange Commission – but to the local tech community, the signal it sends about increased engagement from Hollywood is oversized.

Representatives of CAA declined to comment on the new fund. But given the interests of past agency-led venture capital funds, and the continued melding of Hollywood and tech, it appears the agency’s new venture is for startup investments.

For an agency, the benefit is twofold: taking equity in the white-hot tech industry adds a potential revenue source, and there is the traditional business of taking a 10 percent commission on brokered deals.

And as celebrities have taken a growing interest in tech, being a conduit to this industry provides another service for clients.

For example, if a musician wants to get involved in a music startup, the tools to fund and develop this business might be available in-house.

Nearly all of the top talent agencies – including United Talent Agency, William Morris Endeavor and Paradigm – in recent years have vastly expanded departments that deal specifically with tech ventures.

The shift to becoming a stronger player in tech has come at a time when Hollywood’s wheelers and dealers are re-examining their roles.

“As we were diversifying the agency’s business, we needed to start thinking about ourselves as principals as well as agents,” said Michael Yanover, who heads CAA’s business development division. “Tech plays a big part in that.”

The transition hasn’t been smooth.

There are essential differences between the two camps: Entertainment is a cash-driven industry, where funders like to see a quick, definitive return on an upfront investment. Tech companies take a longer view and are comfortable burning through cash for the promise of future profit. Also, Hollywood is by nature risk-averse; the technology community embraces disruptive, cutting-edge ideas nearly to a fault.

Talent agencies have a complicated history with funds – some were touted but failed to materialize, while others were promising for a time and then abandoned.

Still, many in the local tech community gladly welcome the agencies playing the role of financial backer, and despite earlier missteps, they recognize the benefit of Hollywood’s gaze nonetheless.

Jeff Solomon, who heads Venice tech accelerator Amplify.LA, has had several meetings with CAA and other agencies about deals to get them involved with startups. Although he applauds their embrace of tech, some of the progress is stymied by what he views as a conservative approach.

“Agencies talk a lot about making investments, but I haven’t seen a lot of activity with our companies or the ones that we’ve introduced,” Solomon said. “Maybe they’re feeling out the landscape before actually getting out there and making big bets.”

A little over a decade ago, discussions on any level between tech and entertainment would have seemed unlikely. Tech was associated with file sharing and a laissez-faire view on intellectual property, at odds with those whose livelihood was made by creating and protecting content.

Things changed when Apple Inc. partnered with music labels to sell songs through its iTunes store. The door was opened for other wings of the entertainment industry to be part of the shift in personal technology.

“As entertainment budgets are changing and times are changing, the agencies are looking to generate cash in ways beyond that traditional 10 percent (commission),” said Alec Shankman, who heads digital media at Beverly Hills talent agency Kaplan-Stahler. “Both sides have a vested interest in figuring out how to work together.”

For CAA, building Funny or Die in 2007 was as much about leveraging the comedy talent it represented – in this case comedian Will Ferrell – as it was about partnering with outside investors. The site produces and streams original comedy videos and is co-owned by Menlo Park’s Sequoia Capital, Ferrell’s production company and CAA. Neither Yanover nor an agency spokeswoman would disclose the amount of money it invested in the site.

Paradigm has advised and contributed to a number of tech companies, including Santa Monica comedy app maker Laffster, which the agency invested in.

Brent Weinstein, who heads UTA’s digital media efforts, said the role the agency plays in the worlds of entertainment and celebrity makes it an ideal co-founder of digital content companies.

“We sit at this nexus where we’re able to help bring early stage companies to life through our relationships and other strategic partnerships,” Weinstein said.

That nexus is still dominated by a traditional agency-as-talent broker approach, marrying entertainment and technology and increasing the role celebrities have in stamping companies with their imprimatur.

The rise of YouTube as a platform for original videos in the past few years has also provided an opportunity for the entertainment industry to have a presence in tech. West L.A’s AwesomenessTV, one of YouTube’s funded partner channels, was created by a UTA client, director Brian Robbins.

While agencies have been keen to play their traditional roles of deal makers, they seem much less comfortable as investors.

Of the agencies the Business Journal spoke with, none were willing to discuss their financial stakes in the startups they co-founded, perhaps with good reason.

Agencies have had a checkered history with venture capital funds. In 2007, CAA was to put together a fund significantly larger than the current one – as high as $200 million, according to several reports. That fund, which was to be led by Menlo Park’s Draper Fisher Jurvetson, never came together. William Morris had a $20 million venture capital fund, the Mail Room Fund, and made some investments. But in 2011, two years after the agency merged with Endeavor, the fund quietly ended.

Paul Bricault, who co-managed the William Morris fund, conceded it never reached its full potential, a fact he attributes to a confluence of outside factors. But he maintains Mail Room Fund had the right structure and experienced fund managers – unlike many other agency-led investment efforts

“It’s been more of a dilettante approach in the past,” said Bricault, now a partner at Santa Monica investment firm Greycroft Partners. “To make the fund work, you need dedicated investment personnel. Without that focus, most of the efforts to be in the venture capital game have not borne a lot of fruit.”

Part of the problem might arise from a potential conflict of interest that agencies face when investing in projects. Having a vested interest in a company might not always benefit a client – would an agent recommend an actor get involved with a startup the agency owns, even if it’s a losing venture?

An old franchise agreement among the agencies and the Screen Actors Guild limits the commissions and ownership stake agents can have in enterprises. The agreement, which expired in 2002 and has not been amended or renewed, does not say much about options for investing in startups.

While the agencies are still uneasy talking about startup investing, they are much more comfortable talking about playing a role that’s closer to the wheelhouse: making deals.

Yanover emphasized the experience that CAA has in terms of negotiating deals and bringing the right parties to the table. Just as Hollywood agents see validation in a big studio to finance a movie, so too is getting a large investment firm to back a startup a familiar sign of success.

“For us to be investing money from our balance sheet is, to me, less a proof of concept than getting a bunch of big companies that have been tremendous investors on board,” he said. “It’s a lot more substantial and will likely have a much higher success rate than us pouring money of our own.”