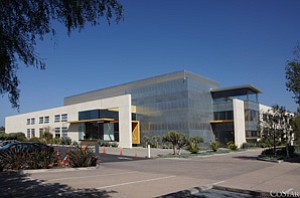 Jamestown Properties, which has a 25 million-square-foot portfolio stretching from Boston to San Francisco, is in negotiations to purchase four of the five office buildings in the office complex, at Exposition and Olympic boulevards, from Lionstone Group of Houston in a deal that could be worth $278 million or more, sources told the Business Journal.

Lionstone bought the buildings, which comprise 463,000 square feet on the 12-acre property, in 2009 from developer Maguire Properties Inc., now MPG Office Trust Inc., for only half as much – about $139 million – according to CoStar Group Inc. An affiliate of the Recording Academy owns and occupies the fifth building on the property.

Matthew Brainard, senior managing director at real estate brokerage Studley’s Westside office, said the site is among the most attractive to creative tenants seeking space in Santa Monica, which is already among the hottest submarkets in occupancy and rental rates in Los Angeles County. He is not a party to the transaction.

“It is a very dynamic, high-end little market in and of itself,” he said. “It’s got that low-rise suburban creative feel, which is more in demand among Silicon Beach-type tenants. It provides an alternative for a company that wants creative space but also wants the services of an institutional campus landlord.”

Representatives of Lionstone and Jamestown did not return requests for comment.

The price at which Jamestown is buying the complex could not be determined, but Lionstone has been quietly shopping the property around for an asking price of more than $600 a square foot, or at least $278 million, about twice what it paid four years ago. If that price is met, the gross dollar value of the sale would be the second highest in the county this year, following only the sale of the U.S. Bank Tower in downtown Los Angeles for $368 million. On a square-foot basis, it would be among the top 10 sales in the county this year.

When completed, the deal would mark Jamestown’s first purchase in Southern California.

It is among a number of national investors that have entered the active beachside market recently. Last year, New York’s Vornado Realty Trust bought the 112,000-square-foot office building at 520 Broadway in Santa Monica for $61 million.

For the last two years, Santa Monica has been one of the strongest submarkets in the county as it benefits from the booming tech and entertainment industries. At 12.4 percent, it had the second-lowest first quarter vacancy rate in the county, according to Jones Lang LaSalle Inc. The average monthly asking rate in the quarter was easily the highest, at $4.72 a square foot.

Patrick Inglis, vice president in the downtown office of Jones Lang LaSalle, said investors consider the Westside the best market in Los Angeles. “It has the best exposure to growth industries – media, tech and entertainment – and it’s an established market and is viewed as reasonably safe investment with reasonable upside. People are looking at L.A. as a good value.”

Its plans for the Santa Monica property are not clear.

Lionstone completed a lengthy capital improvement program after it acquired the campus, adding a café, tenant locker and shower facility, and landscaped outdoor space. It was planning to build a 1,500-foot-long wall along the Exposition perimeter to reduce the impacts of a coming Metro light-rail line.

Lionstone might have been motivated to sell the property if it achieved the return it sought. The Westside market – which has seen rental and sales rates rise over the last two years – is prime for the sale.