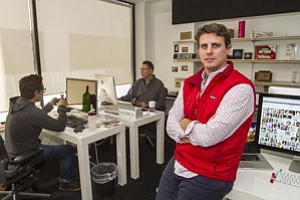 Michael Dubin isn’t shy about his ambitions for Dollar Shave Club. Launching the company last year as a mail-order razor service was fine, but to put it in his words, “We want to own the bathroom.”

Recently, Dollar Shave Club launched its second major product, one that the Venice company looks to ride toward the hallowed grounds of bathroom mavens.

The offering: a wipe for men.

To be specific, One Wipe Charlies, a durable, flushable wet nap, moistened with aloe vera and other salves that Dubin and company insist make it superior to the toilet paper of yore. Yes, even two-ply. It costs $4 for a pack of 40, but is only available to those on the razor plan.

Dollar Shave Club’s first venture beyond the face is also the official start of its second act – an act in which it needs to become the company investors think it can be.

During the rest of this year, the e-commerce site will release four or five more items, all in the male grooming category. Even for a startup that was able to sign up 200,000 subscribers, who pay $1 to $9 a month to get four or five razor heads, the pressure is on to churn out a new big thing.

“A company like that has to continually check the pulse of customers and make changes to keep them in the fold,” said Ira Kalb, a marketing professor at USC’s Marshall School of Business. “It’s not easy to get people to think about your other products, especially when your name is Dollar Shave Club.”

Dubin admitted that selling shaving gear alone isn’t enough. Among its subscribers, the largest chunk pays for the midrange option of $6 a month. Spread over an entire year, that amounts to just over $14 million in revenue, hardly a nick in the $6 billion men’s shaving and grooming industry. That will need to change for Dubin, 34, to reach his stated goal of making the company a powerful name in consumer products.

And as Dollar Shave Club reaches the upper limits of where razors can take it, the company begins the process of establishing a larger brand, the center of which is Dubin himself.

He launched Dollar Shave Club into prominence by starring in a humorous introductory video that became a viral hit. The company has refrained from any follow-ups until now, with his new spot introducing One Wipe Charlies.

The ad and its campaign retain the tongue-in-cheek tone of its predecessor – the title of the second video is “Let’s Talk About #2” – but the need to further the Dollar Shave Club name is serious. To Michael Jones, president of Santa Monica’s Science Inc., which was an early investor in Dollar Shave Club, the company’s appeal hangs equally on the business model as well as Dubin’s star potential.

“He has a brand view that goes way beyond razors,” Jones wrote in an email. “His unique personality and ability to build a brand upon his own outlook makes him a strong candidate to be the next Proctor & Gamble.”

Dubin co-founded Dollar Shave Club as a relative newcomer to the tech startup world. Previously, he worked in digital marketing for big brand advertisers, specializing in driving traffic to video through social media.

He and the father of a friend devised Dollar Shave Club in 2010 and brought the business to Science, a tech incubator that’s put itself at the center of L.A.’s e-commerce boom.

The first official day of operation, March 6, 2012, was marked by the launch of the YouTube video.

Thanks largely to social media traffic, the video got big quickly; within a week it had more than 3 million views; now it has more than 10 million. The crush of visitors checking out the service was so intense that for 24 hours after the video hit, Dollar Shave Club’s site was down.

It was one of the few viral hits that reached pop culture status – Mitt Romney’s campaign even parodied it during the 2012 election. A year later, it’s still used as an example of how an inexpensive video (reportedly shot for $4,500) with the right tone can almost market itself.

Jimm Fox, president of Toronto video production and marking company One Market Media, said the promotion was the rare campaign where viral success drove not only view counts, but also product.

“Creating a successful video is as difficult as writing a hit record,” Fox said. “Dollar Shave Club’s video worked because it was creative enough to spark interest, but the edge was just enough to appeal to a large number of people.”

That success soon led to more funding; in November, Dollar Shave Club closed a $9.8 million A round, led by Palo Alto investment firm Venrock. The company moved into its own digs in a converted red-brick firehouse just off Abbot Kinney Boulevard in Venice and has staffed up to 25 people.

Newly raised money brought with it raised expectations, as the company was confronted with the potential of being a one-hit wonder. What’s more, subscription e-commerce has been falling out of favor with tech investors, which puts added pressure on Dollar Shave Club to stay sharp.

“It’s very difficult for e-commerce retailers to sustain a strong customer base once the novelty of a particular program or campaign wears off,” said Ali Lipson, a senior retail analyst at Chicago research firm Mintel Ltd. “Though the concept of Dollar Shave Club is unique, the products can be found in many retail channels.”

Dollar Shave Club’s long-awaited sequel, as is typical of sequels, is dividing fans so far.

The style of the video is the same as the one that launched the business: Dubin walks across sets, brusquely interacting with employees, a child and a costumed bear, all the while touting the virtues of One Wipe Charlies.

Plenty of commenters on the video’s YouTube page have extolled the company’s “marketing genius.”

But with just over a half-million views after the first 24 hours – and slowing considerably – it appears the trajectory won’t match its predecessor’s. One Market’s Fox dubbed the second video “underwhelming.”

Dubin, who spoke with the Business Journal prior to the video’s June 4 launch, knew One Wipe Charlies might cause people to do a double take.

“It’s a bold statement,” he said, “but we wanted to plant our flag on the far end of the field.”

More important to Dubin, however, is the category Dollar Shave Club is entering. The $9 billion toilet paper market the company is vying for with One Wipe Charlies is its biggest yet. And with a fervent belief that it’s proposing a better solution to a messy problem, Dubin thinks the company stands a chance of tearing off a sizable piece of that industry.

It has already touched off some debate online about the usage of wipes as an alternative to toilet paper, but it might not be as obscure as it seems.

Dollar Shave Club executives cited reports by research firms Mintel and Iri Worldwide that say 51 percent of men have used flushable wipes. And yet they might not have the same pricing appeal of razors: A box of 600 wipes costs $18 at Costco.

As the company attempts to go further into outré male grooming products, USC’s Kalb said, it could well learn from the nearly 100-year-old strategy pioneered by its largest competitor – Gillette (now a unit of Cincinnati’s Proctor & Gamble Co.)

“Nobody was buying Gillette razors until they started giving them away practically for free, and people realized how much they like them,” Kalb said. “Dollar Shave Club needs to do something similar if it wants to break men’s habits in the bathroom.”

This next slate could prove far trickier for the company. While razors are a product people use on a fairly predictable basis – each one lasts about a week for daily shavers – it is difficult to time the consumption of items such as wipes or toothpaste (something Dollar Shave Club execs have mused about as a future offering). Dubin said the company will closely monitor customers’ buying habits so it can make informed recommendations of when guys need to reup.

And with more products in the pipeline, Dubin is taking a broad view. So even if the wipes don’t stick, something else might.