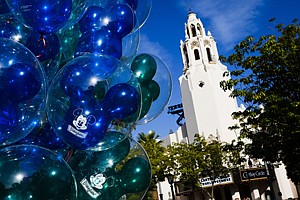 Balloons for sale at Disney California Adventure in Anaheim. Photo by Bloomberg News

The mouse has roared again.

Boosted by its ESPN cable powerhouse and increased traffic at its theme parks, Walt Disney Co.’s stock rocketed 31 percent over the past year. In the process, the Burbank entertainment giant became L.A.’s first public company ever to crack the $100 billion threshold for market capitalization. It stood at $114 billion as of June 30, solidifying its hold on the top spot in the Business Journal’s annual list of publicly traded companies.

The rise in Disney’s value has been so dramatic during the last couple of years that the company now by itself makes up more than one-fifth of the $553 billion in total value of L.A’s 163 publicly traded companies.

Indeed, the top three companies on the list – Disney, No. 2 Amgen Inc. of Thousand Oaks and No. 3 Occidental Petroleum Corp. of Westwood – make up nearly half (47 percent) of the total valuation of L.A.’s public companies.

Nonetheless, it’s quite a turnaround from last year, when the 175 public companies on the Business Journal list grew their combined capitalization by a meager 1 percent.

As for the rest of L.A.’s public companies, their valuations were boosted by the same national and global forces that drove gains in the broader markets: government monetary stimulus programs and record-low interest rates that left investors with few other places to get decent returns.

In all, 143 companies posted gains in market cap – and 108 of those were double-digit percentage gains – while only 35 companies lost market value.

The growth might be dependent on larger economic trends, such as record-low interest rates and government stimulus. The aggregate revenue growth of L.A.’s public companies in 2012 was 5.6 percent, while aggregate net income grew only 1.4 percent – not even close to the increase in market valuation.

“The underlying fundamentals of these companies aren’t nearly as strong as the market valuations suggest,” Bernath said. “That’s one reason investors have been so skittish the moment there’s any hint that the stimulus programs will end.”

The 163 companies on this year’s Business Journal list represent a net loss of 12 from last year as 15 companies fell off for various reasons and three were added through initial public offerings.

But this shakeup had virtually no impact on the overall market value: The companies that dropped off were mostly small- and microcap stocks, while the three companies with initial public offerings jumped straight into the midcap ranks: Puma Biotechnology Inc. of Los Angeles ($1.27 billion market cap), Kythera Biopharmaceuticals Inc. of Calabasas ($497 million) and Virtual Piggy Inc. of Hermosa Beach ($239 million). The overall net change in market cap: $600 million, or 0.1 percent.

IPO activity was down from the previous year, when four companies went public. Several more readied to go to market but never pulled the trigger; the largest of these was Century City aircraft leasing giant International Lease Finance Corp., which could have had a market cap of up to $10 billion.

Among the 15 companies that fell off the list were City of Industry clothier Hot Topic Inc., which was purchased by New York private equity firm Sycamore Partners; bioplastics firm Cereplast Inc., which moved from El Segundo to Seymour, Ind.; and Agoura Hills video-game maker THQ Inc., which declared bankruptcy and whose assets were sold.

To get a sense of Disney’s power on this year’s list, just the gain in the entertainment giant’s market cap was equivalent to No. 5 Public Storage Co.’s $27 billion in total market valuation.

The chief driver of that huge 31 percent gain was the ESPN cable sports empire. The cable network has locked up broadcast rights to many of America’s most popular sports and sporting events for years to come, drawing loads of advertisers and a very lucrative revenue stream.

“ESPN has been doing so well that it now transcends sports and has become the glue that is holding all of cable television together,” said B. Riley analyst David Miller.

Meanwhile, new attractions at Disney’s theme parks have boosted attendance, which when combined with ever-rising admission prices, have caused revenue to soar. One local example: the addition of the Cars Land attraction at Disney’s California Adventure theme park next to Disneyland in Anaheim.

“That attraction has completely turned that theme park around,” Miller said.

Disney’s film businesses has held its ground as it has generated enough hits (“Iron Man 3” and “Oz the Great and Powerful”) to offset the high-profile flops (last year’s “John Carter” and this summer’s “The Lone Ranger.”)

While Disney dominates the local public company landscape, it ranks in the mid-20s in market cap among American companies, alongside Visa Inc. of San Francisco and Intel Corp. of Santa Clara. No. 1 is Exxon Mobil Corp. of Irving, Tex., ($402 billion) and No. 2 is Apple Inc. of Cupertino ($372 billion).

Occidental, coming off a disappointing market performance in 2011 and 2012, managed a 3 percent gain in market cap for the 12 months ended June 30, closing at $72 billion. That’s largely because of a dramatic turnaround in the last few months, driven by higher oil prices and the departure of longtime Chief Executive Ray Irani, who had been engaged in a power struggle for control of the oil giant. Irani’s exit allowed current Chief Executive Stephen Chazen to proceed with plans for a breakup of the company designed to boost shareholder value.

“It’s only in recent months that management has begun to talk seriously about a strategic repositioning of the company’s asset base, including a split between domestic and international operations,” said Pavel Molchanov, analyst in the Houston office of Raymond James & Associates of St. Petersburg, Fla.

No. 5 Public Storage posted a 7 percent gain in market cap, closing June 30 at nearly $28 billion. Along with most other real estate investment trusts, the Glendale self-storage company’s stock had risen more than 10 percent through mid-May. Then it fell back.

“The entire REIT sector came under pressure with the rise in long-term interest rates,” said David Harris, an analyst in the New York office of Imperial Capital LLP of Los Angeles.

Valencia biomedical company MannKind Corp. moved up the most on the list, jumping 46 spots to No. 36 as its market cap rocketed to $1.9 billion, roughly five times last year’s value. Investors are betting that its inhalable insulin treatment Afrezza will soon get final federal approval and then rise to blockbuster status.

“MannKind has the potential to completely change the life of the diabetic with its inhalable insulin,” said Keith Markey, analyst with Griffin Securities Inc. in New York.

Santa Monica Spanish-language broadcaster Entravision Communications Inc. moved up 33 spots to No. 76 as its market cap shot up more than five-fold to $533 million. Entravision owns some two dozen Univision affiliate stations; Univision has become a ratings dynamo of late, passing NBC to claim the fourth spot among the major broadcast networks.

“Entravision is benefitting from … the continuing ratings dominance of the Univision platforms and streamlined operations for its television and radio properties,” said Julio Rumbaut, a Spanish-language media consultant in Miami.

On the flip side, U.S. Auto Parts Network Inc. fell farthest on the list, dropping 37 slots to No. 138. The Carson online aftermarket auto parts retailer shed 70 percent of its market value as it lost ground to competitors; it only had $38 million in market cap June 30. But on July 18, shares rose 8 percent on news that Maguire Asset Management LLC, a Laguna Beach investment company, had accumulated more than 5 percent of the company.

“Internet Brands snapped up the biggest Web forum sites in a number of sectors, leaving CrowdGather with the smaller players and unable to compete effectively,” he said.