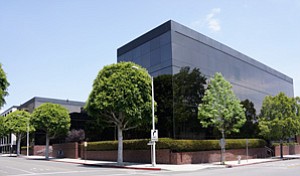 Kennedy-Wilson Holdings Inc. has acquired the Beverly Hills office buildings that were once home to talent agency William Morris Endeavor in a $66 million deal.

The Beverly Hills real estate investment and services firm plans to move its headquarters into one of the two next year and will lease the second.

CIM acquired the buildings, which together have 127,141 square feet, in 2011 for $47.8 million. At $527 a square foot, the Kennedy-Wilson deal is among the highest office prices in Beverly Hills this year.

Kennedy-Wilson is planning a multimillion-dollar interior and exterior renovation that would modernize both properties, giving them larger, more prominent lobbies and courtyards as well as upgrading the interior office space.

“We want to give it a more modern look that will attract a preeminent company,” Prabhu said.

The firm plans to move its headquarters into the 151 El Camino property from its 9701 Wilshire Blvd. location by the end of next year.

The 150 El Camino building was purchased in partnership with New York’s LeFrak Organization. The co-owners hired Bob Safai of real estate brokerage Madison Partners to find creative or media tenants for that building. Asking rates are likely to be close to $5 a square foot, among the highest in the market, Prabhu said.

“The rates will be commensurate with the renovation that will take place,” he said.

CIM, which announced the sale of the buildings earlier this month but did not disclose the buyer or sales price, declined to comment for this column.

FilmL.A. Inc. is saying goodbye to its longtime downtown L.A. headquarters and moving into the heart of Tinsel Town.

The nonprofit on-location film permitting agency signed a long-term lease for the full 17,785-square-foot 12th floor of 6255 Sunset Blvd. with landlord Kilroy Realty Corp. Terms of the deal were not disclosed, but industry sources value the deal at more than $5 million.

The firm is relocating from comparable space at 1201 W. Fifth St. in downtown, where it had been for nearly a decade.

FilmL.A. President Paul Audley said the company evaluated about 100 locations before deciding on the Sunset Media Tower, which offers better parking and public transportation and – perhaps most importantly – a prime location.

“This move brings FilmL.A. back to Hollywood and closer to the community it serves,” Audley said in a statement.

The firm, which will receive monument signage on Sunset, plans to move by the end of the year.

Kilroy, a West L.A. real estate investment trust, acquired the 22-story, 322,000-square-foot building in August for $76 million from an affiliate of CBRE Group Inc. It has been significantly upgrading the interior and exterior of the 42-year-old property, last updated in the mid-’80s.

The FilmL.A. deal was one of the first two significant transactions completed at the building since Kilroy’s acquisition. Nielsen Media Research, a unit of Nielsen Co., was the other. The company, the largest tenant in the building, recently renewed its lease but downsized by about 20,000 square feet to approximately 45,000 square feet on the 14th, 19th and 20th floors.

Rob Waller and Patrick Amos of CBRE Group represented Kilroy in the transactions.

After stepping down as president of Kennedy-Wilson’s multifamily management group last month, Robert Hart is launching a multifamily investment firm of his own.

Hart, who had been an executive at Kennedy-Wilson for 14 years, launched TruAmerica Multifamily this month. The nine-employee company is headquartered in Sherman Oaks and has an office in Newport Beach. It plans to open a Seattle outpost next month.

The firm aims to invest $300 million to acquire, rehabilitate and manage Class A and B multifamily properties along the West Coast with the goal of a total portfolio worth $1 billion. It is targeting properties that require some upgrading, which will allow the company to add value to its purchases.

It will close its first acquisition – a more than 200-unit apartment project valued at more than $80 million in northern San Diego County – this quarter.

It is receiving financial backing from the Guardian Life Insurance Co. of America and will also partner with third-party investors on a property-by-property basis.

Hart said that the growing population and dwindling vacancy in apartments – with rental rate growth of about 4 percent to 5 percent a year –should make the venture profitable.

“You don’t have enough (apartment) supply to keep up with demand and everyone wants to be close to job centers,” he said. “It’s a strong business model for the foreseeable future.”