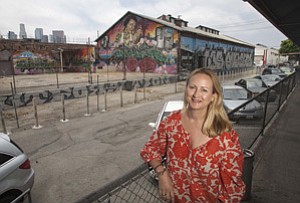 When Oblong Industries Inc. set up shop in a downtown L.A. warehouse just a few blocks from the Los Angeles River in 2007, the old brick building might have seemed a strange location for a company building technology straight out of futuristic film “Minority Report.”

At the time, Oblong’s new home – dubbed the Arts District – was a gritty industrial neighborhood defined by its crumbling buildings and proximity to railroad tracks and Skid Row.

But as Oblong has grown from a small team of MIT graduates to a bustling 65-person company, the Arts District has evolved, too.

Today, the neighborhood is brimming with local denizens who shop at hip boutiques and dine at trendy restaurants. The activity has attracted a cluster of technology companies looking for a less polished alternative to Silicon Beach.

“We felt it was a good location for us because we liked the centrality of downtown,” said Mary Ann de Lares Norris, chief operating officer at Oblong. “We think it’s a great place to do business.”

The Arts District is bordered by the Los Angeles River, and Alameda, First and Seventh streets. It got its name some 20 years ago as a nod to the artists who began to live and work in the area’s former industrial buildings.

In the last two years, a number of tech companies have also begun to call the Arts District home. But they aren’t the mobile app or e-commerce startups of the Westside.

Instead, many of these firms are developing environmental technology or addressing social issues.

Blue Marble Game Co., for example, moved into an office at the Factory Place Arts Complex in 2011 to develop therapeutic video games that help stimulate the brain. The 15-peson company now contracts with the Pentagon to make games that help veterans with memory impairment.

Last year, communal work space Hub LA opened its doors to entrepreneurs looking to make a social impact. With more than 200 members, it has a wide range of tenants, but more than a half-dozen of them have the trappings of tech startups.

Another contributor to the district’s growing tech landscape is the L.A. Cleantech Incubator, which has been mentoring startups focused on renewable energy technology out of a temporary office on Hewitt Street. The city-sponsored non-profit broke ground earlier this month on a permanent home, the La Kretz Innovation Campus, a block from its current site.

When the campus is completed in 2015, it will serve as the flagship of the Cleantech Corridor, a four-mile strip of land that runs along the river and through the Arts District.

“It’s really important that if we’re going to build this ecosystem that nurtures technology companies and clean tech companies, we have to have a physical presence for that,” said Fred Walti, executive director of the incubator. “We want to build this area as a clean tech hub.”

The Arts District has long been part of the industrial core of Los Angeles. Its proximity to the Fashion District has also given rise to a handful of retail businesses along its Alameda border.

But as downtown has seen an influx of loft dwellers and cafégoers, so, too, has the Arts District.

A handful of warehouses-turned-lofts now dot the district’s streets, interspersed with shops and restaurants catering to the people who live there. The area is now drawing comparisons to New York’s Meatpacking District or San Francisco’s South of Market neighborhood, where tech darling Twitter Inc. has set up its elaborate corporate headquarters.

But it’s more than lunch spots and cocktail hours bringing technology companies to the neighborhood.

Andrew Lustgarten, corporate managing director at the downtown office of real estate firm Studley Inc., said tech firms are especially enamored with the Arts District warehouses, many of which have been converted into cheap creative office space with high ceilings and open floor plans.

At an average of $2 per square foot with some utilities, rents are less than half of what Santa Monica’s rates were for the first quarter.

“The cost to be in Santa Monica and Culver City has become so expensive that we’re seeing some of those companies now considering downtown L.A.,” Lustgarten said. “It’s the new place to be for these creative companies.”

Another common theme is the Arts District’s proximity to freeways and public transit.

Jon Miller, co-founder of Cleantech Incubator portfolio company Hive Lighting, said it’s convenient for his firm – which manufactures energy-efficient lighting for film shoots, concerts and other events – to be near major transportation routes.

“We’re five minutes from every major freeway,” he said. “We do a lot of shipping and receiving, and we started exporting this year. It’s relatively easy access from any direction.”

It was these factors that drew Oblong to the Arts District office six years ago. The company had developed a technology called g-speak, which allows software to run across multiple screens. Instead of controlling those screens with a mouse or keyboard, a person controls them through movements and gestures.

Today, the company sells its video conferencing and collaboration tools – which evolved from g-speak – to clients such as General Electric and IBM. It’s grown from a small office along Third Street to 12,000 square feet of production, office and showroom space.

De Lares Norris estimates that one-third of her staff either bikes to work or uses public transportation for their commute. Many of the firm’s younger employees also live in the district.

But as other companies have followed, the Arts District is already starting to see many of the same problems that the city’s more populated tech hubs experience.

Many businesses complain about the lack of parking for employees, especially as restaurants open up and draw car-driving customers from outside the area.

Studley’s Lustgarten said the converted warehouses were never meant to house more than a handful of workers at any one time. Parking becomes a problem when tech companies take over those spaces and fill them with desks.

“Buildings that were meant to be sparsely occupied are now being densely occupied,” he said. “Parking is becoming a big problem. There are new developments a few years down the line where landlords are going to have to build parking lots with these buildings.”

Then there’s the issue of space. Already, Lustgarten said, it’s becoming harder for companies to find large empty warehouses that have been converted to creative office space.

At Hive, Miller said he’d like the company to stay in the Arts District when it grows too big for the incubator. But he recognizes that it might be hard to find an office.

“We’ve started to identify as a downtown company,” he said. “I really do think it will be a place where it’ll be a question of how to get into the Arts District. Hopefully, we’ll be one of the stories of someone who got in early.”

The evolution of the Arts District from gritty industrial streets to artistic community can also be attributed to the area’s former business improvement district.

Founded in 2006, the BID assessed fees from property owners to pay for security patrols, garbage cans and cleaning services. But in May, a Los Angeles County Superior Court judge ruled that the BID's renewal process was constitutionally flawed and ordered it to dissolve by the end of July.

Several businesses said they’ve already noticed an increase in dog poop on the street and have begun to feel less safe at night without the BID’s bicycle patrols.

Property owners could reform the BID under new rules. But the dissolution of the group is threatening to undo the progress that the Arts District has made in recent years.

Sheryl Flynn, chief executive at Blue Marble, said she would contemplate moving out of the neighborhood if security patrols don’t resume.

“That is reason enough for me to consider leaving,” she said. “We’re so close to Skid Row. Not that those guys are going to do anything, but I’ve really felt safe knowing that in a couple of minutes there will be a guy on a bike.”

On the other hand, some residents and business owners have said that the district needs to get back the edgier feel that first attracted them to the area.

Elizabeth Stewart, founder and chief executive of workspace Hub LA, said she worries that further Arts District gentrification could cause the neighborhood to lose some of its charm.

“It’s changing very rapidly,” said Stewart. “It’s such a special neighborhood right now. We don’t want it to be replaced. It will lose all the things that people are attracted to.”