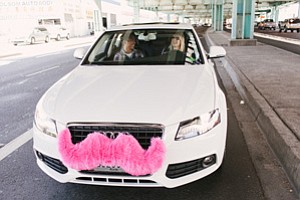 A Lyft car with moustache. Photo by Courtesy Photo

The city’s Department of Transportation sent cease-and-desist letters to Uber Technologies Inc., Lyft Inc. and Side.cr LLC, three ride-sharing companies that have been operating in Los Angeles for several months – in Uber’s case more than a year.

These services, which have become increasingly popular across the country, allow users to prearrange a ride using a smartphone app. In the case of Lyft and Side.cr, or Sidecar, the drivers use their private automobiles; Uber has several offerings, though it’s mostly known as a service that arranges car service and taxicab rides.

Tom Drischler, the city’s taxicab administrator and the author of the letters, said the companies are, in essence, running bandit taxicab operations. As a result, his letters said, anyone caught driving for one of these services is subject to misdemeanor arrest and a fine.

“We cannot verify that these companies are properly insuring the drivers or that the cars have been inspected,” Drischler said. “In our mind that poses a risk. Our top priority is public safety, and we can’t guarantee to the public these operations are running thorough criminal history background checks of the drivers.”

Representatives of the three companies defended the insurance and safety practices of their services, saying some of their vetting is more stringent than those of taxicab companies.

All three promised to continue operating in Los Angeles despite orders from city officials.

John Zimmer, co-founder and chief operating officer at Lyft (whose drivers’ cars have a pink moustache attached to the grille), contended the city’s taxicab regulations do not have jurisdiction over his company. He said ride-sharing, as a prearranged vehicle pickup, differs from the regulated car-hailing business. Lyft and the two other companies have already received clearances from the state’s Public Utility Commission to operate.

“Background checks and insurance is part of our agreement with the PUC,” Zimmer said. “Not only have we always been doing them, it makes it official for us to legally operate.”

The city’s move to ban the services came as a bit of a surprise. Though they had each faced regulatory fights with Austin, Texas; New York; and San Francisco, Los Angeles had been laissez faire about the services until now.

Drischler explained that the department had been monitoring the companies for some time, but did not consider taking action until recently, when the services began ramping up operations. Uber has been in Los Angeles since March 2012, Lyft began operating locally in January, Sidecar in February.

When the companies came to town, Drischler said they had no formal discussions with the city about how to operate.

“They’re the ones that came into L.A. without a permit. They need to approach us,” he said. “But that’s not how they operate; they just go into business.”

Zimmer said he and other executives from Lyft have, in fact, met with DOT officials, though it came right as the company launched in Los Angeles and not previously. He said there was no indication at the time the city found his company to be operating illegally.

The conflict might come down to a definition of how, exactly, to categorize these ride-sharing services. If they are considered taxicab services, they would be subject to regulation by the city and county.

“If they operate like a taxicab, they should be subject to taxicab regulations,” said Marco Soto, a vice president of the L.A. office of Yellow Cab Co. after a meeting of Los Angeles City Council’s transportation committee last week.

If Lyft, Uber and Sidecar are not considered taxicabs, they would be subject to the provisional agreement with the Public Utility Commission. The earliest expected date for the agency to lay out firm rules and regulations for these services would be sometime this month.

In the interim, there appears to be a standoff between the ride-sharing companies and the city. Zimmer of Lyft, which is based in San Francisco, said he will be in Los Angeles this week, and while he had no meetings set with city officials, he was open to it.

As for the penalties to drivers, Drischler said the cease-and-desist letter did not apply to rides originating outside the city of Los Angeles; a person picked up in Santa Monica need not worry about any action from the city.

Many members of L.A.’s tech scene have already implored Mayor Eric Garcetti to lift the city’s ban on ride-sharing, and a petition to that effect is already circulating.

For the DOT’s part, Drischler insisted the move was by no means anti-tech.

“Taxicab companies are extremely sophisticated when it comes to tech. All have GPS in their cars, many have phone apps and security cameras. So they’re no slouches in the tech department,” Drischler said. “This isn’t an anti-tech initiative. It’s strictly anti-illegal operations.”